I hope you all had a wonderful Thanksgiving, I personally chowed down about three times my normal dinner intake.  I spent two and a half days cooking, then packed it all into my car for the ten minute drive down to my daughter and son-in-law’s house, bringing along, at the insistence of my six year old granddaughter, my old cat Chrissy, who my granddaughter thought should enjoy the company of their two much younger kitties, Ricky and Rosa, while we feasted.  The three felines did seem to get along famously at first, but sometime during the dinner there must have been a falling out, because Chrissy took refuge under the couch, and not even food could coax her to come out.

As one always on the lookout for immaterial suggestions to direct me in life, I was inspired to choose a fiddle tune called Cat Tracks, from the great Owen “Snake” Chapman, for the Tune of Thanksgiving Week.  Snake was born in 1919 “up in Chapman’s Hollow,” near the town of Canada, in Pike County, Kentucky, about four miles from the West Virginia border.  This is the heart of coal country, and Snake, like many of the men of Pike County, worked in the mines until black lung forced him to retire in his middle age.

Chapman learned to play fiddle in the old time mountain style from his father, George "Doc" Chapman, who was a highly respected Pike County fiddler in his day.  But like many other Appalachian old-time fiddlers, Snake listened to the radio and was influenced by Opry fiddlers like Arthur Smith, incorporating their fancy long bow techniques into his playing.  But when the old-time revival began in the early to mid-60s, about the time he retired from the mines, Chapman came back home to the old time style of his father, though he still kept some of the Nashville tunes in his repertoire.  He also composed some very spritely tunes of his own, and Cat Tracks is one of those. 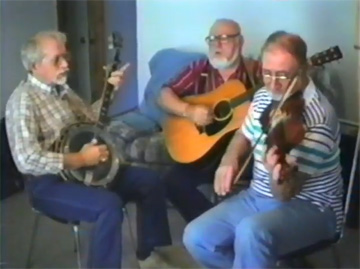 Snake passed away in 2003.  I first heard of Snake Chapman about five years later, from our good friend Jim Reed.  Jim kept telling me that my old time three finger style of picking sounded a lot like a friend of his.  He was talking about Paul David Smith, the great fiddler and old time three finger picker who often accompanied Chapman on banjo.  Jim lives just five miles down Rt. 119 from the Smith and Chapman homesteads, and played music with them often.  So I dug around, and found three albums recorded by Chapman, all with Smith on banjo, and eventually learned ten tunes off of them, including Cat Tracks, Mad as a Hornet, Boating Up Sandy, McMichen’s Breakdown, Devil Eat the Groundhog, Can You Dance a Tobacco Hill?, Johnny Don’t Get Drunk, Jack of Diamonds, Garfield’s Blackberry Blossom, and Rock Andy.  Cat Tracks is from the third album, Walnut Gap, released by Rounder Records in July, 1999.  It’s in the key of C, a key that Chapman uses more often than most fiddlers, and one that I have become enamored with in recent years.  I don’t know, to my ear fiddle tunes in C tunes just seem to have a certain playfulness you don’t quite get from tunes in other keys, and Cat Tracks is one of those.  Listen to Chapman and Smith play the tune, and pay close attention to how Smith follows Chapman closely, complementing him without trying to play the tune note for note.  It’s a flawless bit of musicianship. 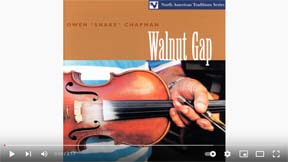 My local jam buddies and I have been playing Cat Tracks for awhile now in our C tune rotation, so I was astonished to find that it is rare in the broader old-timey internet universe.  Not only has it not been a BHO TOTW, there are no tabs, videos, or audio files posted here.  Other than Chapman’s original recording and my banjo video, I was only able to find one other video on YouTube, a fine performance at the 2015 Union Grove Old Time Fiddlers' Convention, by fiddler Sarah Gilbert of Weaverville, North Carolina.

Below is a link to my solo video of Cat Tracks, played on my semi-fretless Tubaphone in double C tuning (gCGCD).  I think I fuss around with using more of the fiddle notes than Smith does, but I don’t try to stay with the fiddle note for note either.  I use double C for all of my tunes in C, for two reasons.  First, I want the tonic to be an open string, because one of the trade-offs of the semi-fretless configuration is that the stopped notes in the fretless portion are not quite as clear as the open or fretted notes.  So I want the tonic note, the first note of the scale and usually the last note of any tune section, to be dependably clear.  Second, when I am playing up the neck, I continue to hit open strings to fill out my roll patterns, and provide a hint of a drone sound.  So again, it’s critical to have that open tonic, on both the 4th and the 2nd string.  I have also included a link to an audio recording of the tune played by me and my busking partner, fiddler John Maguire.  We will never be mistaken for a reincarnation of Chapman and Smith, but I love it just the same, playing street music with John has been a great pleasure these last few years. 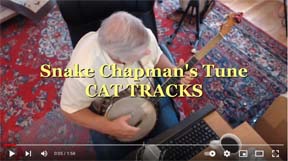 I’ve attached the tab of my arrangement, and my transcription of Chapman’s fiddling, both in PDF format.  You can find my tab in Tabledit (TEF) format on my website.

Don and John Busking in the Boston Public Garden

I never met Snake Chapman, but I did meet Paul David Smith, at Clifftop, in 2009 or perhaps it was 2010.  Jim Reed was camping with Don Couchie and I on Geezer Hill, and he brought Paul around to play some tunes and hear my playing.  We had a nice session, me doing my best to be Paul David Smith to his Snake Chapman, and to not embarrass Jim.  I don’t know what kind of job I done, but it is one of my fondest Clifftop memories.  He was an exquisite fiddler.  Paul David Smith passed away in 2011.

Oh, and I did finally give up trying to get Chrissy to come out from under the couch, and turned the job over to my daughter, Anne Marie, who is truly a cat whisperer.  Within less than a minute, Chrissy was out from under and safely enclosed in the brand new carrier I had picked up for the occasion.   I drove the two of us back home, where we both promptly took a nap.  Thanksgiving dinner will do that. 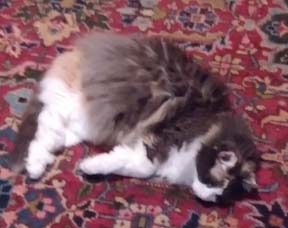 This is so good that I'm going to put away the hammer and gut, and get out the picks and steel for a while. Thanks!

Thanks for the neat tune and the story, too, Don.

Thanks, everyone, for the nice comments! I would love to hear other folks' renditions. I think it would make a great clawhammer tune.

Don Borchelt awesome! Great everything....arrangement, groove, tone. I'lll have to put that on my list of 'to learn' tunes.

Learning another tune from Snake Chapman is a treat -- thanks, Don!  You and John play so fluently and up-to-tempo, it's a challenge to keep up.  Your up-the-neck skills are also unmatchable, so to arrange something, I re-tuned and was able to stay down-the-neck.  But my tuning isn't in the key of C, so I tuned the cello banjo to the equivalent of fDGCD and can now begin to play along with you.

It was fun to see that my shirt yesterday happened to match the title Cat Tracks.  The photo shows my cat Mosky checking it out today. 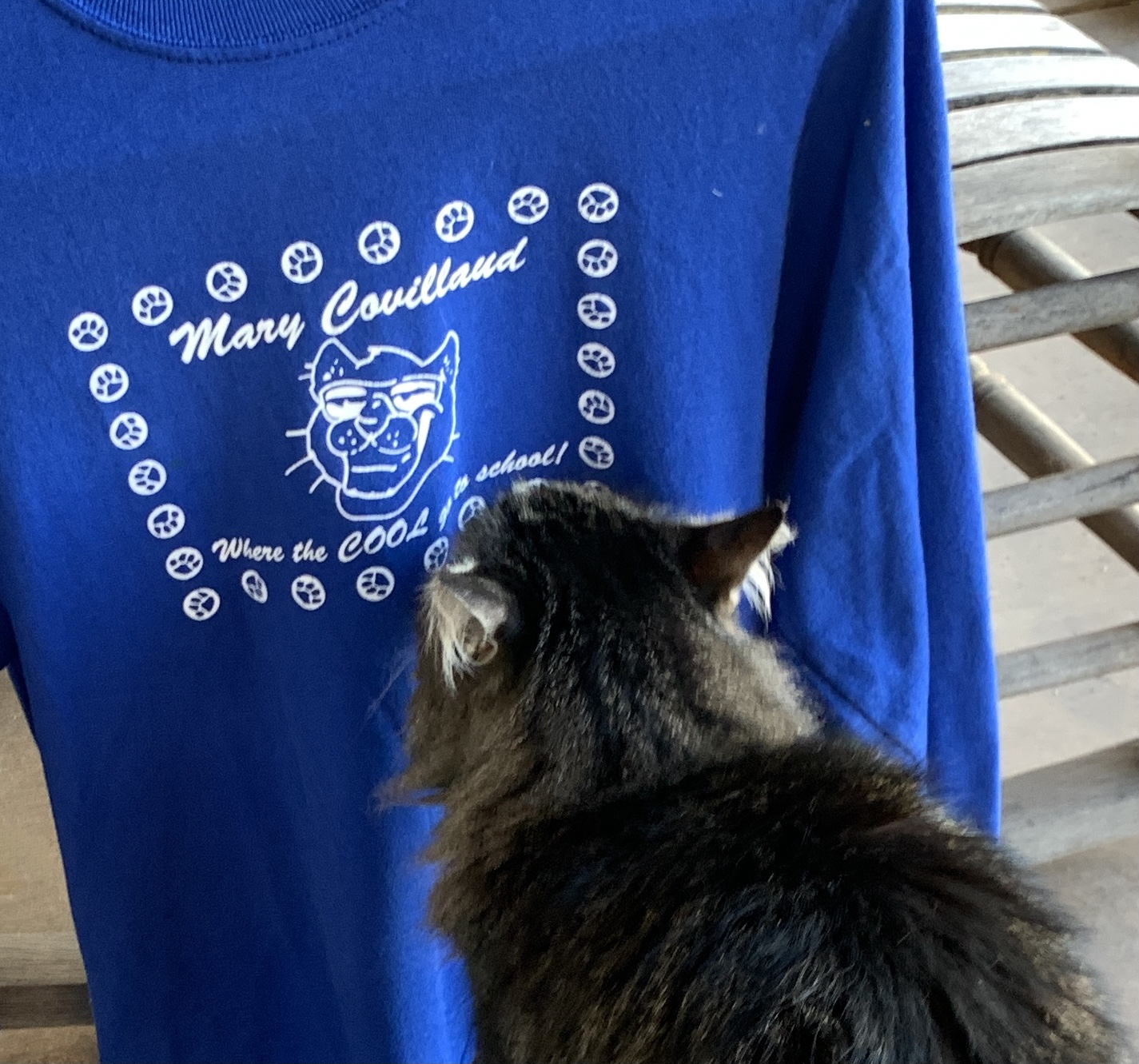 That's a truly fine arrangement, Janet, and very sweetly played. Moving to the F position in G model (and then digging out the cello banjo and tuning down) is a very imaginative, and successful, approach. It's always a pleasure to see how you navigate the path of moving a fiddle tune to the banjo.

Nick Hornbuckle, now I really want to hear how you handle it! And Lobstertrician, after listening to Janet, I'm thinking this might sound great with the hammer and gut. Imagine the duet, one with a gourd, and the other with a cigar box. That would be pretty cool.