Hood dark and early morning from grey Kingston, Ontario. It's 6C and will hit 8C later under cloudy skies. Yesterday was the Mrs.' birthday and we went for breakfast in Gananoque, followed by a drive to Port Hope, unfortunately shortened by a lengthy traffic tie-up on the 401 - and out in the country, too. We got off the 401 for a bit on the way back. Got a phone call in the car from friends in Toronto wishing the Mrs. a happy birthday. Painting: a view, most likely of High Park (probably the east side - he lived in Parkdale) in Toronto, by Horace R. Veals. He earned his living as a catalogue artist for Eaton's. He died in 1938, before he finished this watercolour - check out the gaps. 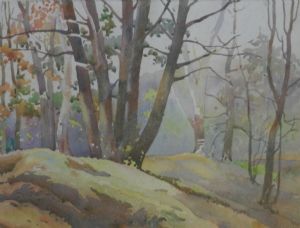 Good Morning from overcast and cool (30f) Northeast Wisconsin. Supposed to get wind today but calm right now. All ready for Thanksgiving dinner with family, only a few last minute things to get.
Have a good day.keep safe and warm.

Good morning !
Blue sky w/ rain later so they say & in the 40's for quite awhile daily .
Going to try spraying some interior water born paint w/ an old paint gun but probably the paint is too thick but its only in a garage .

Paul , I remember going to Gananocque as a youngster quite a few times w/ my parents on our fishing trips to the Rideau Lakes . Most of the Canadian folks in those years were like family !

Good morning from McHenry County, IL
Gray skies, some drizzle. 39degF at 8:15 AM

Wishing you, each and several, a Nice Enough day.

By the power vested in me, I hereby declare that  it's "nice enough" here [translation: It'll get worse].   Skiff of snow overnight, but "risk of frostbite" is part of our forecast for the first time this season..... more due to the winds being forecast [ +50 kph] than the current -15 C. temp.].

Paul, do you figure Veals's painting has or will gain fame/notoriety/??  to rival Schubert's Symphony #8? [And on the off-chance that anybody thinks I know something, you can relax... I had to "look it up."]

Good afternoon from North Somerset. This is a photo I took just over an hour ago when I was out for a local walk. Mild weather and bright here today. 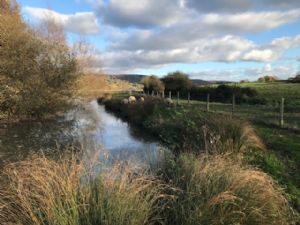 By the power vested in me, I hereby declare that  it's "nice enough" here [translation: It'll get worse].   Skiff of snow overnight, but "risk of frostbite" is part of our forecast for the first time this season..... more due to the winds being forecast [ +50 kph] than the current -15 C. temp.].

Paul, do you figure Veals's painting has or will gain fame/notoriety/??  to rival Schubert's Symphony #8? [And on the off-chance that anybody thinks I know something, you can relax... I had to "look it up."]

Nope. Nobody really knows about this guy. But he was a good watercolourist, somewhat in the style of Fred Brigden, maybe more atmospheric. The gallery described his High Park painting as being like a Disney animation backdrop. He'd had two of his paintings accepted at the Ontario Society of Artists juried shows, but died before the third. He would certainly have become OSA.  We have four paintings by him, this was the last we bought (and most likely his last), and it was taped to brown corrugated cardboard, probably the side of a box, with swatches of paint to test the colours, when we first saw it. The gallery framed it 'cause the cardboard had curled. Somewhere in the house is a paper showing one of his Eaton's catalogue drawings - one of those close-fitting hats you see in Twenties pics.

Schubert was already famous before he unfinished his symphony. 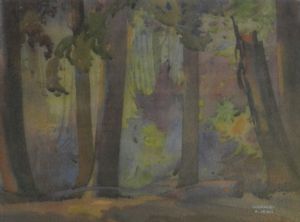 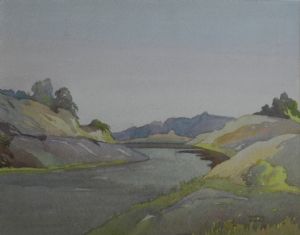 There are famous painters & sculptors however my son in law in BC is not one of them ---- yet !
He recently sculpted this & I think he may have quite a future ahead (:o) 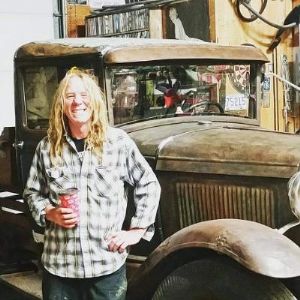 Son in law Bruce in BC 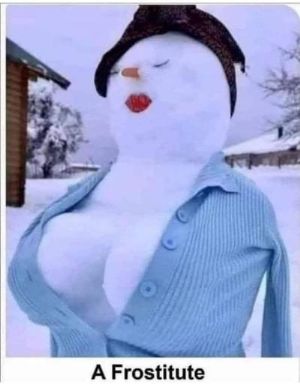 Back in '66 our university class did an ice sculpture for the Winter Carnival. That reminds me of it. It was a go-go dancer performing for a TV cameraman. She had a cleavage, too.

I had pics but lent them to a classmate in '90. He'd become a prof in the department. He lost them. He died not too long ago.

I went to a big benefit concert with local bands & food venues raising money for a Womens shelter.

I was sitting with some buddies & there was a ladies belly dancing club & they came up to our table & danced for some donations. There was a lady that was dressed in coins & was shimmying at our table.

Our crazy buddy yelled out just as the music cut out "I BET THAT OUTFIT MAKES A LOT OF NOISE IN THE DRYER!!!"

Our lady chief of police was there & a lot of local politicians. Everybody Just started laughing!

Sunday. I managed to fit in 2 effective naps. Exhausted for some reason.

Ha , no , but he does like old vehicles !  His AA truck he sanded down the rust a bit then clear coated it . I've sent him a few parts from the states here for it .