When I went back into the music business 30 years ago, I pretty much quit cooking. Between teaching in the late afternoon and early evenings, and gigging 2 or 3 nights a week, it was easier to let somebody else do the cooking. When everything changed a year and a half ago, I started learning how to cook again.

I've always liked a good gumbo. I've made it about a dozen times, and the current batch is pretty good. The technique [it's not really a recipe] was gleaned from a good chef I know, and also from a few comments by Justin Wilson-- the old Cajun chef, various internet recipes, and an old girlfriend of mine.

This is what I did for the current batch:

1. Dice the onion and peppers and set aside.

2. Get a good sized pot and make a roux. Melt the butter over medium-low heat, add the flour gradually, and stir constantly until it transforms into a medium brown, about the color of Hershey's milk chocolate. Be very careful not to burn the roux. There's lots of info on the net about preparing a roux if you've never seen it done. Expect it to take about half an hour.

3. When the roux is Hershey brown, turn down the heat and add the diced onion and peppers, and keep stirring. You'll probably have to add a little water to keep it stir-able and keep it from burning. When it stirs easily, raise the heat slightly until it barely bubbles, and cook until the onion and peppers are soft, stirring often. This will take about 10 or 15 minutes.

4. Add the rest of the water. It'll go faster if you have pre-heated the water in a separate sauce pan.

5. Bring to a boil. Add the spices: thyme, oregano, bay leaf, garlic, and just a touch of red and black pepper. Cover and let simmer.

6. Cut the chicken into chunks and add to the pot, and continue simmering. Add the tomatoes, and simmer some more.

8. About 55 to 60 minutes after the chicken was added, taste and adjust the spices.

9. Flash fry the okra in the same skillet you used for the sausage, using the leftover grease. Add to the gumbo pot and simmer another 15 minutes, more if desired.

11. If you want shrimp in your gumbo, add it in the last 5 minutes of cooking time.

Serve in a soup bowl with Jasmine or long grain rice. If you wish, you can add a little file powder to the gumbo right in the bowl before adding the rice.

You can add or subtract on any of the above proportions according to your taste.  You can make it with or without okra, tomatoes, hot peppers of any kind, and/or celery.

People will argue about the proportions in the roux, and whether to use butter or vegetable oil. My chef friend insists on unsalted butter, and says that salted butter will burn. He also advised me not to add the garlic until after the water has been added-- this is to prevent burning the garlic. I've also tried using corn oil mixed with butter. Some people use canola oil or other oils. This last batch was butter only. How much difference does it make? I don't know. Just make sure you don't burn the roux. If you want a thinner roux, you can reduce the flour. I have found from experience that the roux continues to darken after adding the vegetables, and if it gets too dark, the gumbo may be slightly bitter. A spoon or so of honey can counteract any bitterness.

Most traditional gumbo recipes include celery and more bay leaf. Justin Wilson commented that both bay leaf and celery can take over the other flavors. I left the celery out this time, and went easy on the bay leaf, and liked the results.

I do not use stock in this recipe. Adding the uncooked chicken to the gumbo pot makes it unnecessary to me. When I have used stock in the past, the gumbo was too heavy, oily, and salty for my tastes. Flash frying the okra prevents it from getting slimy in the gumbo pot. My old girlfriend liked to use 2 lbs of okra instead of just 1 lb, which is more common. I like it with the extra okra.

You can freeze whatever you don't think you'll eat in 3 or 4 days.

Gumbo can be as complicated as you want to make it.  Some people cook the meat first, set it aside, and use the cooking grease in the roux.  I've heard of all kinds of variations in the herbs and spices.  I usually like to keep my recipes as simple as possible, and gumbo takes long enough to cook even if you keep it simple.  The only "extra" steps I take are to brown the sausage and flash fry the okra.

For the culinary challenged, like me: Progresso's gumbo in a can is not bad. Add real Andoullie sausage to make it much better. Find coarse ground sausage if you can; the supermarket varieties are fine ground, remind me (texture-wise) of hotdogs. I also add more rice.

Progresso Traditional, Chicken Sausage Gumbo Soup, 19 oz (there are a zillion Progresso brand soups, you may have to try different supermarkets to find one stocking their gumbo).

We have a Cajun restaurant in Bozeman, Cafe Zydeco, great food. Like everyone, they have had to limit hours due to lack of employees, sadly. Their gumbo, and their red beans and rice, are my favorite dishes.

Makes my mouth water thinking about some good gumbo,

I can almost taste it. The ingredients are going on the shopping list next week. I've always wanted to make it, never had the right inspiration. Thanks Bob. I am looking forward to making my first brown roux.

Looks like you mixed a roux base gumbo with a okra based. You had me until the introduction of the okra. That stuff is nasty. Diced Chicken? There's no dice chicken in gumbo( think league of their own there's no crying in baseball)one would be better off using the bone in chicken something about the bone in chicken makes for a delicious gumbo. Take up your discontent with my Full Blooded Cajun Mom. We children grew up on her tasty Cajun cuisine.

You can certainly leave the okra out.
And I agree that whole chicken is better.
And there's creole gumbo, cajun gumbo, file gumbo, Carolina gumbos, and probably 10,000 variations.
If you remember your mom's way of doing it, we would be glad for you to post it.
If she did a good jambalaya, you could post that also.

I cook up a few Southwestern Canajun delights myself! I discovered Justin Wilson on PBS when I was in my teens.

I used to brine & smoke turkey legs to add to my Hoppin' John. I made stuffed Cajun turkey wings a few times too. I remember 5B said he used turkey wings for gator bait!

I have a good local source for smoked pork hocks & they go good with beans & rice. We get this Louisiana long grain I add at the end & use our own fresh herbs & home smoked paprika.

I'd love to spend some time chowing down on some authentic Cajun food!

bubbalouie post
I used to brine & smoke turkey legs to add to my Hoppin' John. I made stuffed Cajun turkey wings a few times too. I remember 5B said he used turkey wings for gator bait!

That could not be me that said that. I donât hunt gators but we have used a fried turkey carcass in our gumbo. Turns out to be very tasty. The injection seasoning used, butter and herb; and garlic makes for a good gumbo. We even tried deep frying a whole chicken using the same injection seasoning. Not as good as the turkey but not bad.

Although the turkey wing gator bait idea would probably work.

I had a friend that used chicken leg quarters, put them in a five gallon bucket with garlic powder, closed the lid but left loose enough to vent, let sit one week in the sun before he said it was ready, hung them from a limb just above the water line on a hook

I never wanted to get a gator that bad

I'd like to try gator. I imagine it tastes like dinosaur! Never had okra but from the way it's described I'm not in a hurry.

Our local stores don't carry black eyed peas or mustard greens. We used to gig some massive bullfrogs in southern Ontario. There's some big steamy swamps there. We used to see some big moss back snappers. I've known some guys that would eat them. If it weren't for winter alligators could move right in.

I fell in with a bunch of new friends that were all young outdoorsmen like myself in high school. We camped & canoed & stayed at each others rustic family cottages.

I remember when a pack of us young hunter gatherers would chase down giant water snakes with our canoes.

Im not a big fan of alligator, it isn’t bad, but nothing special, same as frog legs, not bad but nothing I would go out of the way for, they probably taste close to the same.

mustard greens are great, a pot of greens and some cornbread and you've got a meal.  Mustards grow here well even when it's cold. Not sure how much warmth they need, but I would bet they would grow up there in the spring or summer.

now black eyed peas, im kinda like alligator with those, they aren't bad, but if i had the choice I would go with purple hull peas instead, i bet they would grow there in the summer too.

okra, good stuff, boiled it is one of those things you either like or you don't, not many in between, but fried, that is worth eating, pickled okra is good too,  i like boiled okra, but I've gotta say don't start with that, it could turn you away from okra all together, pickled okra is great, fried is great

i get my seeds from these guys.

I heard the greens in Hoppin John represents money that will come to you in the new year. 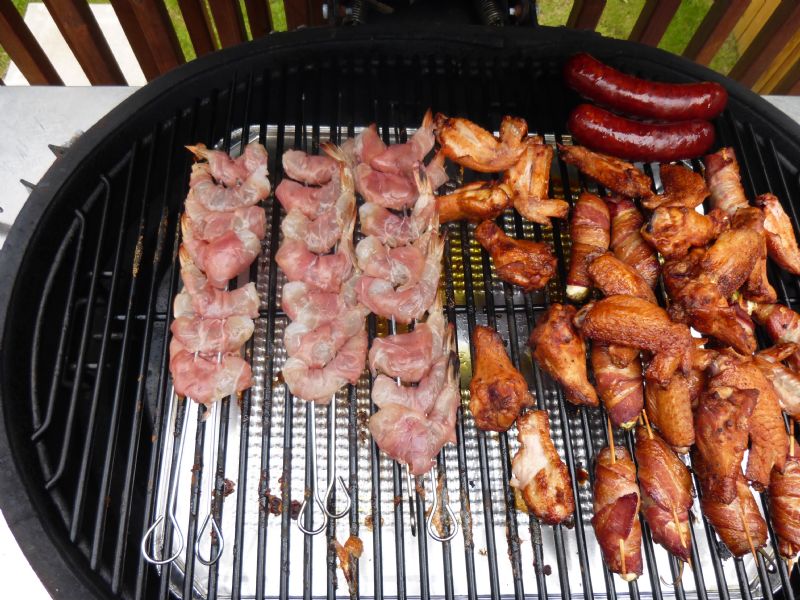 I prefer collards myself.

They used to be easy to find in the smaller stores around here. But now, the supermarket chain stores have forced most of the independents out of business, and the chain stores don't usually carry them.

I threaten to plant a garden every year, but haven't followed through in a long time.

The prosciutto wrapped prawns were the last thing on after the wings & poppers were cooked!

I swore off green bell peppers years ago. The riper they get the less heartburn.

The green peppers in a Greek salad wreck it for me.

Itâs gotten to where i use pablano peppers instead of bell peppers, seems like bell peppers are more bitter than they used to be