Hello ,
Someone can tell me what is the width of the Gibson RB 250 at the bottom , nut side ?
Thank you for yours replies.
Pierre-Antoine from France

Hello, thank your reply. I would like to know if it is not too narrow to play?

My fingers are stubby, with wide fingertips. My Dobson and Fairbanks -Electric both have necks about 1.25 inches wide at the nut, with 1 inch between the 1st and 4th strings. With my wide fingertips, the fingerboard is slightly cramped, but definitely doable.

There is definitely a trend toward wide necks now. 1 5/16ths necks are getting more common, and 1-3/8ths is also being used by Modern Players with wide spaced bridges. Go with a 1-5/16ths neck, you won't regret it. Wide necks allow for wider spaced bridges. Go with at least a 46 mm string spaced bridge. I use a 48 mm. with a 1 5/16ths neck. I'm thinking about going with a 1 3/8ths neck. Also higher bridges are being used, I want to go to a 3/4 bridge from 11/16ths where I'm at now. Whatever you do, stay away from 1-3/16th neck with standard bridges. That set up is too cramped for modern palying styles, or any kind of style in my opinion.

Hello, thank your reply. I would like to know if it is not too narrow to play?

If you have squared off finger tips the old standard 1-3/16th neck will not work for you. Even 1-1/4 will hinder you. To be safe go with 1-5/16th. You can buy it, and replace the neck with a custom neck made to your specs. Sell the narrow neck to somebody else.

Thank you very much for yours replies. I asked you this question because I want to buy a Gibson RB250 from 1984 in France.
I started playing the banjo on a Morris Deluxe copy of the RB 250 and the neck was quite narrow. At the time I had rather thin fingers and it was going well.
Good day for you.
Cordially from Normandy France

quote:Originally posted by Half Barbaric Twanger

My fingers are stubby, with wide fingertips. My Dobson and Fairbanks -Electric both have necks about 1.25 inches wide at the nut, with 1 inch between the 1st and 4th strings. With my wide fingertips, the fingerboard is slightly cramped, but definitely doable.

Try a 46 mm bridge. Many 1-1/4 nut width necks will accept it. It all depends on how wide the neck opens up past the 7 th fret.

I have one and I can play it with no problem. My first good banjo -- built for me in 1973 -- has a 1-1/4-inch nut. BUT, the total string spacing is about 1 inch. Maybe a slight amount under. The other three banjos I acquired over the years have narrower nuts BUT the same string spacing.

Hi, thank you for yours replies
Cordially

I received the Gibson RB 250 which I told you about above. I have some doubts about the authenticity of the instrument or I lack knowledge. Here, there is a label inside the barrel but it is blank (see photo)
the back of the neck has a number.
In addition, there is a space between the top of the neck and the barrel which to me seems abnormal. Please tell me if I didn't get ripped off?
The banjo has a good sound and powerful
Thank you

Here is one to compare:
banjohangout.org/classified/90102

I have to be the one to play devil's advocate here.

My second and most played banjo, a 1959 RB-100, is 1-3/16" with standard spacing. The neck is slim, and it feels amazing to play. I build all of my Lemon necks to as near identical to this neck, unless otherwise stated.

Why is it that wider necks are "better" for modern styles? I play modern style stuff, and I have no issues whatsoever with my 1-3/16" nut. My hands are pretty average sized, although my fingers as a little thick and stubby.

This is just my opinion, but I believe that there is no "better" or "not as good" things out there when it comes to preferences. In workmanship, yes. But I love my 1-3/16" necks, just as y'all like your 1-1/4" and wider necks.

Wider necks allow for increased string spacing at the bridge. 46mm-48mm string spaced bridges are becoming common (Crowe spacing is 44mm), so is higher bridges 11/16"-3/4", Bela Fleck plays a 7/8th height bridge, and has a 1-3/8th nutwideth. Modern Progressive Players use a lot of full chords, inside picking, inside triplets, they dig in more, they leave 2 or 3 fingers down after they picked the string then pick another string, and they do a lot of single string picking etc. A player with squared off finger tips and thick finger tip pads will have a hard time with this style. Traditional Scruggs Style is different, you can get by with a narrow neck and low bridge. I am currently taking lessons from a Progressive Professional Player. At first I felt like a beginner, even though I was at a slightly advanced level with Scruggs Style. I have a 1 5/16ths neck and a 11/16ths bridge with 48 mm string spacing. At some point in the future I may go with a wider neck and taller bridge.

Here, there is a label inside the barrel but it is blank (see photo)
the back of the neck has a number.

I don't see any photos.

HI, ok sorry I Forgobanjohangout.org/forum/attachm...D=280224t the photos . Now, they are there 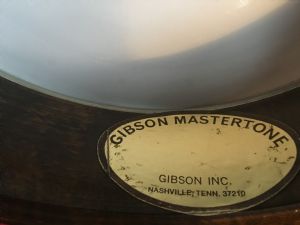 Hello guys,
Hello guys, I received the RB 250 from 1984, the handle is very good, it has the right measurements for my fingers, it's great. Thank you again for your explanations. The problem was converting from inches to centimeters, that's not accurate. 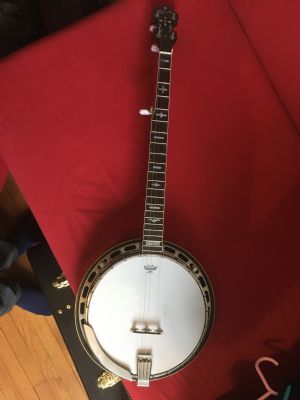 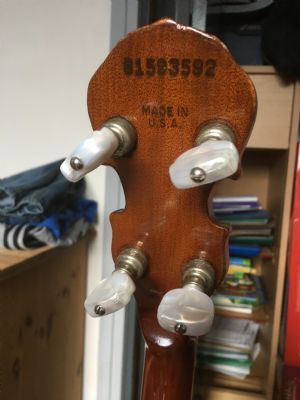 I received the Gibson RB 250 which I told you about above. I have some doubts about the authenticity of the instrument or I lack knowledge.

1- Here, there is a label inside the barrel but it is blank (see photo)
2- the back of the neck has a number.
3- In addition, there is a space between the top of the neck and the barrel which to me seems abnormal. Please tell me if I didn't get ripped off?
The banjo has a good sound and powerful
Thank you

I don't believe you got ripped off. Two or three more photos will tell us more about what you have: (1) side view of pot, showing resonator wall, hooks, and top of tension hoop.  This will show us if you have a two-piece flange (which I believe is correct for this model) or one-piece.  (2) side view of armrest showing how many legs and presense of "Gibson" engraving or stamp. (3) back of resonator, showing color

I'm not an expert, but from what I've read and seen online and from the early 70s RB250 that I own, here's what I beleive:

1 - Label is correct for Mastertones made in Nashville. There was nothing else on those lables except for Earl Scruggs or JD Crowe signatures on appropriate models. I don't know what year Gibson started using the label.

2 - Serial number stamped on back of peghead is correct for 1970s into 1980s. I don't know if it continued later. Because Gibson repeated numbers, sometimes jumping far backwards, I believe your serial number could be either 1984 as you say or late 1980s.

3 - Many (most?) banjos are built with space between the end of the fretboard and the tension hoop. I don't know what's correct for Gibson. And we don't know from photos if your banjo's neck is built that way or if the space is the result of a modification or a shim.

Two reasons I think your banjo is later 80s instead of '84:

1 - The version of RB250 introduced in the early 70s had a three-piece laminated neck (not counting the peghead ears that add two more small pieces). The center laminate was about 1/2-inch wide. It's mahogany same as the surrounding wood, and is clearly visible on nearly every banjo built that way. I have a Gibson shop drawing that indicates the laminated neck continued into the 1980s. It's possible -- likely? -- that by the late '80s Greg Rich did away with the laminated neck and switched to traditional one-piece construction.

2 - I believe the tuners are not correct for early '80s. I believe in the early '80s, Mastertones still had wide-housing off-center tuners with "GIBSON" stamped on the flat surface. They had large pearloid buttons, similar color to Schaller but bigger and more rounded. Your buttons look like what Gibson used later. Tuners are easy to change, and I believe I see outer rings in the wood hinting at other tuners once being there, so the tuners may prove nothing.

Again, judging from photos alone, your banjo appears to be what it purports to be: a 1980s Gibson RB250 from the Nashville factory.

Thank you for your reply , you reassured me. If I'm not overdoing it, I would like to send you more photos for more explanation. Not to be even more comforted but to know more about the history of Gibson banjos. I always wanted to own one, and in France there are not often used sales. Thanks again
Regards

Hello,
Here are more photos. I put 2 photos of the back of the resonator, the color closest to the real color is the one on the photo of the entire Gibson 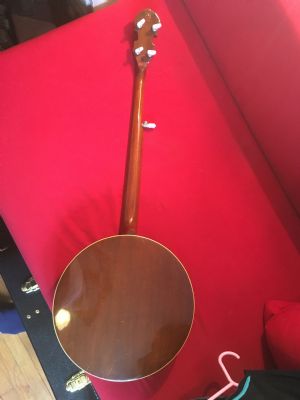 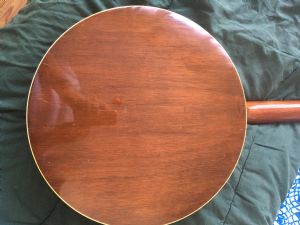 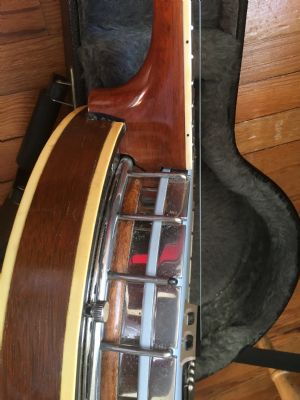 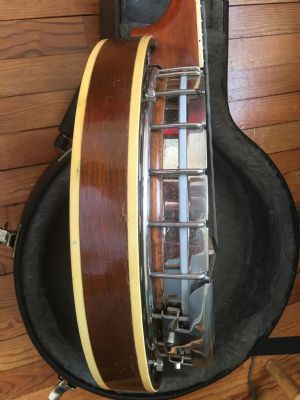 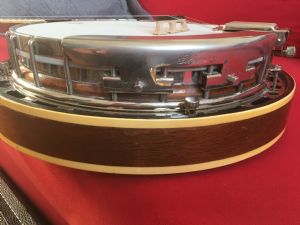 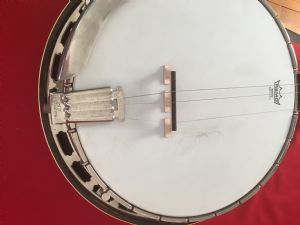