I only met Sonny once, it was at what was known as Sonnyâs Corner at the old Banjothon site at Maryville. Banjo friend
Brandon Henson was picking the Granada, and I said to him, that makes me want to throw mine in the dumpster, and he said something like, if you do, please let me know which one!

Attended Sonny's Nashcamp banjo camp for 5 or 6 years. Got to interact with Sonny a lot during the camps in addition to the classes that he and Bill Evans would teach.

Here's one of the photos from camp of the Chief owners. Don't recall what year. 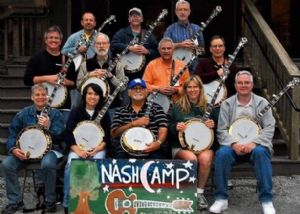 Many years ago the Osborne's came to a local show in a Polish Club a few towns away. Trouble is no one advertised them being there and hardly anyone was in the audience. They came out and opened the usual way. When they braked. Sonny looked around the room started chuckling his famous Sonny chuckle....said “ well I knew what IT WAS LIKE ON THE WAY UP....AND NOW I KNOW WHAT ITS LIKE ON THE WAY DOWN”...AND BURST OUT LAUGHING. Then he said “ why don’t you all come up here on the stage I’ll have them bring in some chairs and we’ll just take turns telling jokes the rest of the night” again that Sonny laughter.....I got to talk to Sonny on many occasions and you wouldn’t have found a more down to earth (one of us) gentleman)
We'll miss you Sonny and condolences to Bobby friends and family a sad day for sure..... except I think we all know where he is now.

Itâs an Osborne Brothers marathon at my house today. I donât think anyone can improve on Sonnyâs oh so smooth vocal blend with Bobby and that perfect banjo backup on the ballads. Just plain wow. I met him only once at a show years ago. He was very gregarious, friendly, and outgoing, happy to spend a moment with a fan. RIP Sonny.

In the 80s during my first stint with Southern Rail we were lucky enough to be booked by promoters like Arnold Banker into the undercard of many festivals that featured the great southern bluegrass acts like Jim and Jesse, Mac Wiseman, the Lewis Family, and the Osbornes. As such I got to see all of those folks up close, many times, and spend a little time with them backstage. The Osbornes tended to go directly from their bus to the stage and back again, so I didn't have much offstage interaction with Sonny. But it didn't matter - what was important was watching his love affair with the banjo play out onstage.

In an age when banjo players stood out if they cracked a smile, there were a few - Ben Eldridge also stands out in my memory - who actually looked like they were having fun when they played. And then there was Sonny. Every time he took the stage was a cross between high art, improv comedy and demolition derby. In four years of watching him play almost every other weekend of the summer, he almost always surprised me with a lick, or turn of phrase, an interpretation of a song that I had never seen him (or anyone) do before. I literally never saw a show where he played it safe. And, since experimentation carries its own risks, his rare but inevitable mistakes â the ones that couldnât be interpreted as âjazzâ â were accompanied by the best belly laughs I ever saw off of a bluegrass stage. The audience laughed along, happy to be part of the human side of the show. In combination with the Osbornesâ absolute obsession with perfection in their performances and their audio mix, it was the perfect paradox, with Sonny providing both instrumental virtuosity and comic relief, sometimes at the exact same time.

Itâs safe to say that I learned to play the banjo from many sources, but it was Sonny who taught me by example how to play >with< the banjo. Iâm not a fraction of the banjo player he was â almost nobody is, or ever will be â but I learned from him that, beyond just being able to play the notes, music is meant to be enjoyed by the performer and the audience, and that itâs a better experience for both performer and audience when everyone can appreciate the music and is also in on the jokes.

Speaking of jokes, many of the festivals where I saw Sonny also booked the Lewis Family. The onstage feud between Sonny and Little Roy was legendary, and you didnât want to miss either bandâs set on the chance that one of them would be ready to pull off a prank on the other. The culmination for me was a set at Peaceful Valley in the Catskills, where Sonny arranged for an ambulance to pull up backstage, sirens blaring. Two EMTs came up from backstage, took away Little Royâs banjo, hoisted him onto a stretcher and carried him back to the ambulance, and drove off the festival ground. The Lewises continued, sans Little Roy, for about ten minutes before Roy walked back onstage and started playing again. Thatâs just one of the practical jokes I saw the two of them pull on each other over the years.

It was a sad day for all of us out front when Sonny decided to retire from playing. The decision was understandable, since he wanted people to remember the best of his playing, but it deprived a generation of banjo players of the opportunity to see the combination of excellence and joy that comes along so rarely. Every time I get on stage with a banjo, I have Sonny in my head. If I walk offstage smiling after the show, I know that seeing him play back then is a big reason I decided to devote a big part of my life to doing what I do.

At every show, Sonny demonstrated the difference between performing great music and entertaining an audience, and the importance of doing both at the same time. He had, and still has, few equals in that.

In the late 80's, The Withlacoochie(Florida) Bluegrass Festival coincided with Halloween. I helped others wrap Little Roy up like a mummy with toilet paper. With his banjo over his shoulder, we put him in a large box and then carried him on stage in the middle of the Osborne Brothers set. After a while, Little Roy burst out of the box and dis his best to disrupt the show. Wish I had a photograph!

With Monroe and Martin 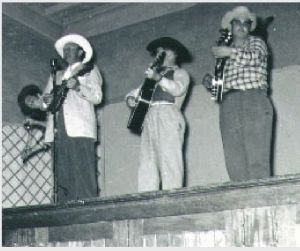 Sonny with the Granada. Scanned from an old slide, taken at the Berkshire Mountains Bluegrass Festival in 1982, the year it was held in Cooperstown, NY.

This photo was made at a festival somewhere in either North Louisiana or South Mississippi I think in 1978 or 79. We had just finished our afternoon set, and when we came off stage, Sonny walked over and asked about the Stelling banjo I was playing.
My wife of course made us pose for this small treasure. 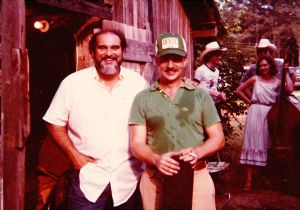 He asked you about YOUR banjo after your set! That's not something many can say, I imagine!

And the stories above about Sonny and Little Roy are hilarious!

He makes a joke involving Little Roy among other things in this short clip.

He asked you about YOUR banjo after your set! That's not something many can say, I imagine!

And the stories above about Sonny and Little Roy are hilarious!

Sonny at that time had an endorsement deal with Stelling to sell a fancy version of Geoff's Sunflower model, called the Sonflower. 78 or 79 is about the time the model was released and my guess is that he was checking out Stellings he found at festivals (they were somewhat less common than Gibson clones in the late 70s) either just before or just after doing his deal. I don't recall exactly when he got his Granada but I know it was either a little before or a little after that time, and for a brief period he was playing his Stelling model at shows. Do you recall what banjo he played that day?

Update - I just checked the liner notes on Bluegrass Collection. They're dated April 7, 1978. The Brothers did that album shortly after Sonny got his Granada, so he probably was playing it when you met him whether it was 78 or 79. The Stelling deal probably dates back to 1977, IIRC.

I never met Sonny, but whenever I feel the need for inspiration, I watch this:

I never met Sonny, but whenever I feel the need for inspiration, I watch this:

Arnie .... it just doesn't get any better than that for just solid banjo picking ..... nothing fancy .... just solid!

I got to see the Osborne Brothers live quite a few times at festivals in the early 70s, and their performances always left me speechless. They had a really unique style, and Sonny's banjo playing broke all sorts of barriers. in the 80s, Sonny wrote a column for the Banjo Newsletter called Keep On the Sunny Side, where he would comment on a lot of different subjects. He always called it like he saw it, and he never held back. Here is a light-hearted excerpt from his May, 1986 column that I used later in a BNL cartoon retrospective.

one year at jekyl island years ago ,, i got to play the granada,,well when sonny saw how i played he called lil roy and raymond fairchild over,,told them watch this... i picked a few minutes,,,and sonny howled and said to them" he picks better then ya'll do and its upside down".
later i ask him if he would do siempre on stage for me in their second set,,,he said sure and grinned. well about half way through they stopped and he announced he was doing a request.. and looked and found me in the 3rd row. he ask to me to come on stage so i could see better,,i kept shaking my head no no no. he said sure c'mon and got the rest of the band to coax me as well.. but i stood fast... finally he said if you don't at least come up to the front of the stage i ain't doing it. so i did and he broke into it.. and just laughed the whole time.... sonny would get one on you if he got the chance...after that day ,,we were friends ,,, over the past 20 years we swapped e mails and i would call once in a while...but i haven't in the last few years and i so regret that now... he was one of kind and i will truly miss him.