Hey everyone,
I was changing a head on an old banjo and one of the nuts for a hook fell on the garage floor and I canât find it anywhere.
Iâve tried nuts from three different banjos and all of them are too small to thread onto the hook. How many different sizes and thread patterns are there for tension hooks? I hope I can find a nut that fits this.
Thanks for any help!

Show us a photo, you have to upload it to your page then grab it and show it here
Old is still good
There are people here who may actually have some
There are many different size threads

Ya I think old is good too. My garage is more of a shed. It has a dirt floor, thatâs why I canât find it, but I spent over two hours sifting through the dirt with a magnet. I really wanted to keep all the parts original. Oh well.
Thank you for the tip about the photos. Hereâs twoâ¦ 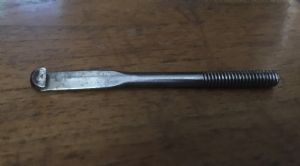 The lost- nut is probably made of brass, hence non-magnetic. I believe your hooks thread pitch is 8-26.

I have one that looks like a match. Send me a message through here or email Dan@TradBanjo.com. I can send you a picture. If it works, I will put it in the mail for you.

Thread pitches found most commonly on the hooks and nuts of US made banjos;
8-24; Pre-war Vega instruments
8-26; The most common. Used by more banjo manufacturers than any other size.
8-28; The least common, but it pops up occasionally.
8-32; Surprisingly a common thread pitch that you can actually buy a tap and die at the local hardware store. I see this size on Cole, but other brands too. Brooks Masten uses this pitch on the hooks and nuts he makes. The easy to find tooling helps keep his cost lower.

If it's an Asian made banjo, it could be a metric size.

Thanks everyone!
Mbanza - thank you for pointing that out! That didnât even cross my mind since none of my other banjos are old enough to have brass parts I didnât think of that.
I just acquired this at a thrift store for cheap and have had fun restoring it. Has no makers markings on it. I believe itâs fairly old, and donât believe itâs Asian.
Thank you Bob for the explanation of the threading. That will definitely help me! And itâs interesting to know things like that too :)

Hopefully Dan has a match for me!
Thanks again guysâ¦I really appreciate all of your input.

Bob Smakula
Now Iâm curious since I tried nuts from a Gold Tone, Gretsch and Recording King and none worked. Would you say those are likely the 8-26 being that theyâre not older instruments? If so I can rule that size out.
Are there places that sell spares for the 8-24, 8-28 and 8-32?
And I suppose if it turns out to be a 8-24 that means itâs likely pre-war?

You have tried modern asian parts on a vintage USA made banjo, so the thread pitch gf the new parts is definitely going to be metric, thus very different than the parts on your banjo.

Very likely I have the nut you need, but you have to let me know the thread pitch. Take the hook to a good hardware store, or a Fastenal location. They can use their thread pitch gauge and tell you.

Alternative is to mail me the hook and I'll mail it back with a nut installed.

Like this? I have 4 extra from a couple of ebay purchases I made, the bolt is 1/4". The flat one of course. 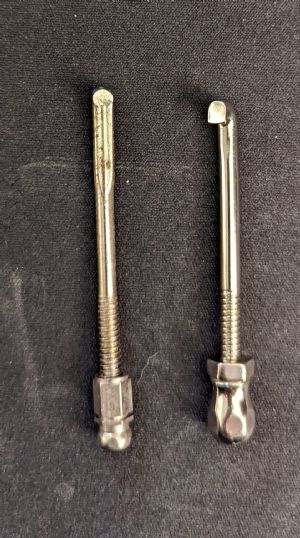 Ya I think old is good too. My garage is more of a shed. It has a dirt floor, that’s why I can’t find it, but I spent over two hours sifting through the dirt with a magnet. I really wanted to keep all the parts original. Oh well.
Thank you for the tip about the photos. Here’s two…

Dirt floors are a problem, for sure.

I have found that sometimes dropped items can't be found at first, but somehow show up a week or two later. Keep hoping, and maybe shine a flashlight around the shop some dark night--you might get a metallic glint.

I have also found dropped parts in unexpected places, like pants cuffs, in my shoe, and even sometimes inside my socks. If you're sitting, remain seated until you've checked you shirtfront and you lap. The initial trick for lost bits is to stay as still as possible while first looking. Move too soon or too fast, and a part that's simply stuck to your clothing can then fall off. Never leave the area to grab a magnet, rake, or sieve until you are absolutely sure the part can't be found by sight; it may end up in the grass, which is even worse than dirt.

You can probably see that I have been a bit of a ten-thumbed klutz at times. I offer these suggestions from miserable experience.