Good dark and early morning from cool Kingston, Ontario. It's 0C now, dropping to -1C and then soaring to 13 C with a 40% chance of showers. Got a call that the new tires for the Cinelli were in at last. Rushed to town to get them before closing. Then we went to Gananoque (Gan-an-okway) with plans to dine at Anthony's. Pulled up right to the front door, the Mrs. got out and read the note: "Closed due to power failure." Turned around and headed back to Kingston to seek out a restaurant - one that would not be invaded by Queen's U students post football game. On the drive, I figured that the leaves are pretty much going to go to brown and fall, bypassing any brilliant reds.

Right now I'm looking at a bottle of Johnny Walker black label, about 3/5 full - from our wedding rehearsal party in '79! Plus an unopened Carolans and an unopened Appleton Extra, plus some other stuff.  Drinking never interested us.

We were at an art auction in '01 when this painting came up, "Hay Bay, Autumn 1966" by Beverly MacDonald, wife of Manly MacDonald. Same frame (only smaller) as our Manly painting. Beverly died in '69, Manly in '71. 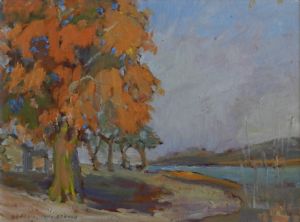 Gâmorninâ, everybody. Sunny & 60 today is the fourkast,,, Iâll be basking in that gentle autumn sun.
Crossing the George Washington Bridge into New York City a few years ago. G’mornin’, everybody. Sunny & 60 today is the fourkast,,, I’ll be basking in that gentle autumn sun.
Crossing the George Washington Bridge into New York City a few years ago.

I think that's the bridge we crossed in August '69 on an unplanned morning detour on the way to the Atlantic City Pop Festival two weeks before Woodstock. One thing I vividly recall: there was so much smog you couldn't see the water below. Got to the Festival and our (fake) press passes worked! (Actually, I was planning to do a write up for Montreal's underground paper, but their "pass" was garbage.) Here's Janice, the first time I saw her perform (second time was at the Festival Express). 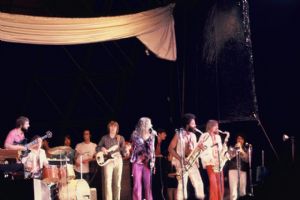 Have a super Sunday everyone.

This little guy was crossing the trail on a recent walk. It was less than a foot long. I believe itâs a juvenile Milk Snake. They can get up to 4 feet long. They hatch in August and September. 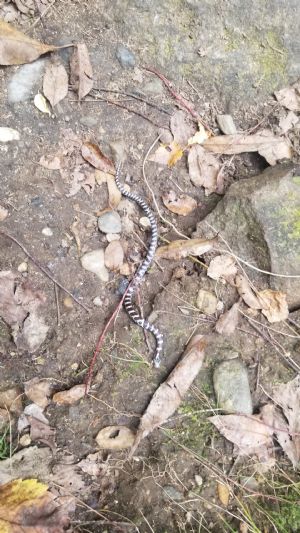 Good dark and early from 30 miles north of Milwaukee, Wisconsin.
Got down to near frost temps last night, but my humble abode is snug and warm.
Even when the afternoon temp was a mere 50 degF, my DIY solar collector was blowing 80 degree air into the house.

Good morning everyone! Sun won't be up here for another 3 hours!  Waiting to see how our atmospheric river is going to hit us . It's already hitting the coast south of here.

We're making sure everything is charged up if the power goes out. We came home from work on Friday to find the a tree down taking out the wires at the end of our street. Nothing better than a hard work week than to come home  to darkness!

We have a woodstove & water & sewer are gravity fed so it's not too bad. Have a good day!

Good Morning from clear,sunny and cool Northeast Wisconsin. Maples are now shedding leaves so going to be time for second pass at clean up in a few days. Dinner last night with friends, had a good time and ended up at a friends home watching a recording of the Badger game and good conversation.
Last year She gave me a tablet for birthday so been spending time finding apps that reproduce the software on my laptop. So yesterday found 3 apps for tuning Guitars, Banjos and Ukes. Purpose is to lighten up my travel load. Actually don't have a tuning app for guitar and banjo on the laptop so tablet is more useful.
Have a good day, keep safe, have fun.

Good morning from N E Ohio. Cool and clear.
The frau and I trimmed the yard and put away outside furniture in preparation of the drastic change in weather up here.
The dogs love the cool weather and we are all looking forward to some bonfires this week.

Good morning from Colorado. Temps to get into the mid 60's under sunny skies. I'll hit the road for my Sunday run in a few minutes. Hope to do 10+ miles on these 67-year-old legs with the goal of doing this routine well into my 70's. We'll see. Running and banjo picking .... both therapeutic by nature.

Good chilly morning from upstate NY @ 40 F w/ clouds & sun .
Grass growing has slowed down but will probably need mowing at least once more . A quick snap shot off the back porch . 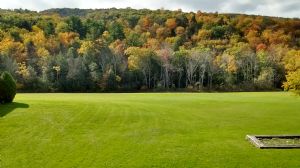 Sunny, +8C but serious wind chill. It's a Carhartt kind of a day.
Might be the 4th garbage run to the Transfer station this week.
Might even swing by the cardboard compactor wit an offering.
That's the money-maker: used card board is a best seller, even
the output from a 650 village like this one.

The local gov't liquor store (monopoly) has a small cardboard compactor in the back. The Liquor Board bought some 300+ of these machines for each the stores from Sweden of all places. Took 30 days to pay back for all of them.

Toasted cheese sandwiches and soup coming up next.
Enjoy your Sunday.