Iâm in the market for a bottle gourd banjo and am seeking advice from fellow players.

My goal (like so many others, Iâm sure) is to achieve the sound made so famous by Adam Hurt on the instrument built (and apparently loaned to him) by David Hyatt. Hereâs a YouTube video for reference: youtube.com/watch?v=HuMIh1-_yiM

Obviously, the skill of the player is the main determining factor in the sound here, but itâs also clear that the instrument itself is contributing toward this (absolutely beautiful) sound.

1. What specific features should I look for, or request from a custom builder, in order to achieve a less muddy/tubby sound, and a clearer, more resonant, sustained and âbell-likeâ sound?

2. What modern-day custom builders should I consider? Iâm a serious player looking for a high-end instrument, so money is no object.

Thanks in advance for any hints, tips or advice you may have!

One of the unique features of that banjo is that the gourd was grown in a frame so that it is sort of flattened (i.e. with a shallow depth and flat back). I've seen Adam give considerable attention to that fact when discussing the tone of that particular banjo.

In general, the smaller/shallower the gourd, the less "tubby" the sound. You may find that a relatively shallow canteen gourd banjo would get you closer than many bottle gourd banjos using bottle gourds of a similar size that weren't grown that way. Just a thought, though.

I think Noah Cline has experimented with putting a head on the back of the banjo as well, which would yield a similar shape, but possibly a still-different tone. Perhaps he'll chime in.

You may know this, but Adam's banjo is pretty unique in that the bottle gourd was grown between two boards, to make it flat on the front and back. This likely affects its tone as well as its comfort/playability. I am surprised that other makers haven't pursued having gourds grown in this manner -- at least not as far as I'm aware.

As to builders, I would suggest your search should start (and possibly end) with Pete Ross. He has been building gourd banjos longer than anyone who's alive, and does absolutely beautiful work.

I think the best comparison would be like comparing a ukulele to an upright bass. The smaller and shallower the body, the brighter the sound. The larger and deeper the body, the deeper the sound. In my experience, that’s been the case with all the different gourd banjos I’ve made. Those with shallower bodies have produced brighter instruments, both canteen and bottle gourds.

I think the gourd banjos that Adam has referred to as “muddy” are the kettle/bushel type gourds, which he discusses along with the Hyatt banjo here: https://youtu.be/wZY0kN5OapU

Here’s one I made recently using one of the largest of that type gourd that I’ve used to date, for what it’s worth: https://youtu.be/93Gmi9EH8UI

Honestly, I too prefer the smaller gourds, or what I would call the middle ground for the sizes I’ve both seen and worked with. For canteen gourds, I like 8-10” diameter with a depth of about 4-5”. For bottle gourds, a lower bout width of 8-9”, length of around 12”, and a depth of around 4” (both natural and flattened backs). Granted, I use and work with what I get, unless the customer specifically requests a certain size or shape.

A former customer had asked if I had considered cutting the rear off of a bottle gourd, and tacking another head to it to create a flattened back, similar to the Hyatt gourd banjo, making it more comfortable to hold while playing. I don’t remember if I had thought of this first or not, but it led me on to trying it. I’d considered growing one in a frame to try it, but I’ve grown gourds before, and the season just isn’t long enough here as the ones I grew the other year were thin-walled and light. Making the gourds flat by simply cutting the back off is more efficient time-wise and somewhat gets the same effect, though probably does alter the sound from those that are solid and have been grown flattened (granted the Hyatt banjo has been the only one I’ve seen made this way).

Here’s the first gourd banjo I made in this manner, with just the lower bout being cut flat and an extra skin tacked on: https://youtu.be/TC4fpXPt9lk

With the skinned back, I’ve noticed that they have a bit more resonance. I have considered cutting the entire length of the back with a skin tacked on it, but my only hesitation would be the structural integrity, especially in the neck area.

Another customer, after seeing the first flat-back, asked if a wooden panel, in his case, walnut (1/8”), would be possible for the entire length. I recently finished that banjo here (pictures included below): https://youtu.be/NK8WpmHkbRk

The wooden back, to me, added some sustain. With having this, it creates a hard surface, allowing the vibrations to bounce off better than being slightly absorbed or not bouncing as cleanly off the softer inner surface of the gourd wall. Another builder (Barry Sholder) lines the insides with fiberglass, which both strengthens and adds the hardness factor for the vibrations. I don’t seal/line/finish the inside or outsides of my gourds as I don’t think it’s absolutely necessary, as I like them to be natural and try to use gourds with thicker shells. The only exception of staining and finishing the outside was on the walnut flat-back I discussed above, which is the only one I’ve done that way except for one that I only stained.

For comparison of size, here’s the largest bottle gourd I’ve used to date, along with the smallest, both having natural backs (granted the latter had lighter Nylgut strings for G tuning, while the former minstrel strings for lower pitches/tunings): 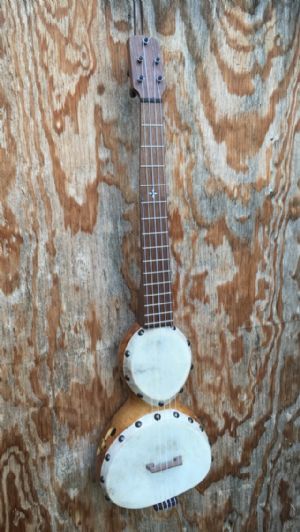 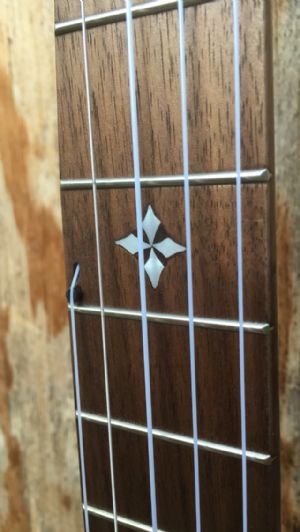 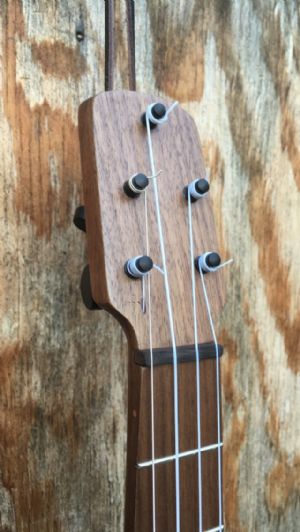 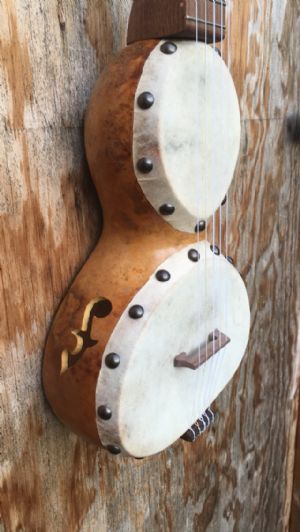 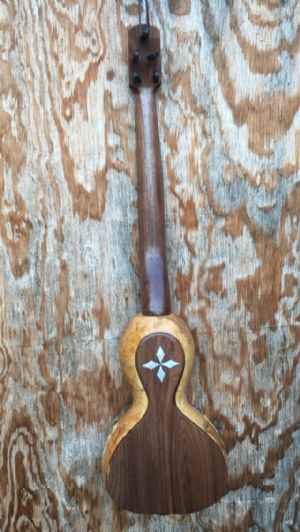 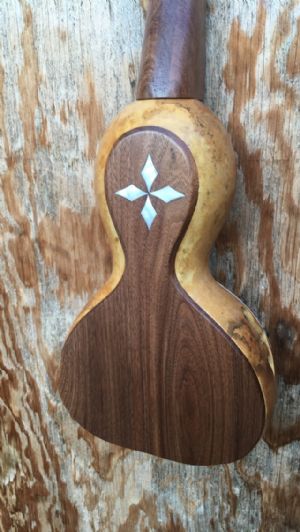 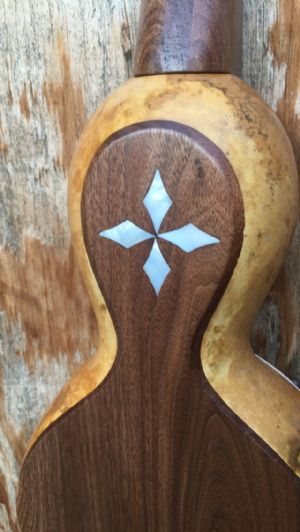 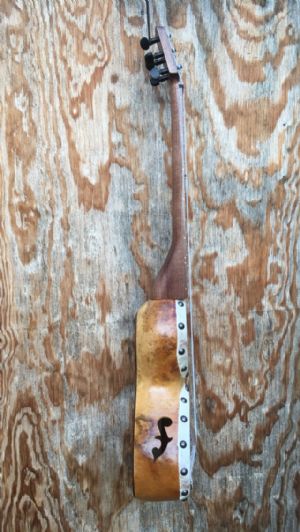 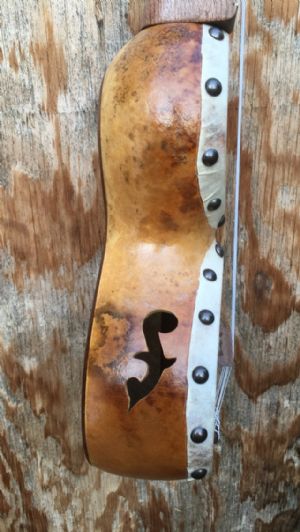 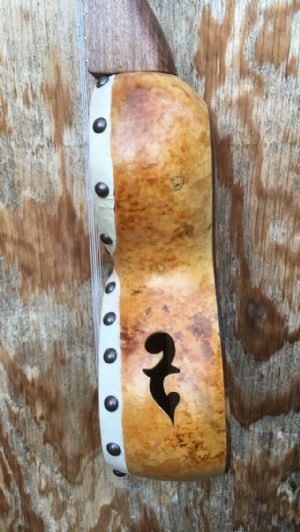 Thanks so much to everyone for all of the great feedback! Noah, I'm truly grateful for your detailed response, which has really helped me to understand exactly what I want... thanks so much for taking the time to do this. I know you're backed up on orders, but I'll contact you anyway via email in the off chance that you might be able to make an instrument for me.