Greetings! I'm primarily a guitar player, but I also get calls when there's a need for banjo or mandolin. So, the bat-signal went out for a banjo player, and it looks like Bright Star has entered the high school musical rotation. Therefore, I'm going to be spending a lot of quality time with clawhammer banjo. Mercifully, I have a lot of time to prepare as well.

I've found the Strumpit site with its valuable information on the pitfalls of this book, but none of the clawhammer material I've worked with so far has solved the mystery of what's going on with the "x" note in the attached tablature excerpt.

Is that x:
1. Actually a muted note, and if so, how is it struck? Upstroke? Thumb or other fingers?
2. A directive to place the thumb for the next note?
3. Something else entirely?

Alas, I'm an Android user, so that shuts me out of the iOS app. But any guidance here is much appreciated, and will hopefully help other people who are Googling around to decipher that. Many thanks in advance! 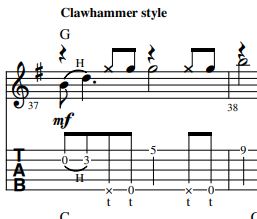 Congratulations on the gig. It's a great show.

I don't play clawhammer or understand clawhammer tab, but in 3-finger tab "x" on a note stem indicates a rest of that duration. Or in tab written as eighths, like the sample here, it was a non-standard way to turn the preceding note into a quarter.

However, I see that this tab uses an actual quarter when needed, so there goes that analogy to 3-finger tab.

Still, I like the idea of x meaning silence for the duration noted, which seems to be the same as your guess 2: having the thumb ready to play an actual note on the next beat.

Bennett Sullivan, who used to post here from time to time, was the original cast banjo player for Bright Star, from its pre-Broadway tryouts through its complete Broadway run. I believe he had a hand in creation of the Brightstar iOS app (which you can't access as an Android user).  I believe it would be worth writing to Bennett either through the Hangout or through his website, BennettSullivanMasic.com.  I don't know if the Hangout private messaging links to his current email, but his website definitely does.

I got to know Bennett a little during my brief relocation to Brooklyn the previous decade and I believe he would be happy to share his interpretation of the tab or any insights he can offer into performing the score. One tidbit I remember hearing from him is he used two banjos -- one for clawhammer, one for three-finger -- with neither in G tuning.

The 'x' indicates an m-skip or a 'ghost' downstroke to create syncopation. A pair of eighth notes would normally signal a downstroke followed by the thumb sounding the 5th string (or an interior string). It's unusual to indicate the thumb (t) is used on the skipped downstroke, but  the author may have meant to signal that the thumb plants silently on the 5th string during the silent downstroke.

David’s explanation is correct. I would add that the term “ghost note” is used because the downstroke preceding the thumb occurs over the strings without touching them, kind of ghost-like — no sound made. It serves the purpose of allowing your thumb to get into the position on the string that it would normally do before being lifted upwards to sound the fifth string, in this case.

'Will it make me a better player?' 2 hrs

'If I Needed You â Banjo Lesson' 2 hrs