Hello,
I just acquired this Gibson banjo, and I would like to gather some info on it.

There is no binding on neck, which reminds me of my brothers 60's Gibson Melody Maker.

Here are a few photos. 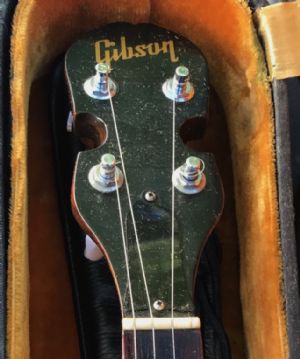 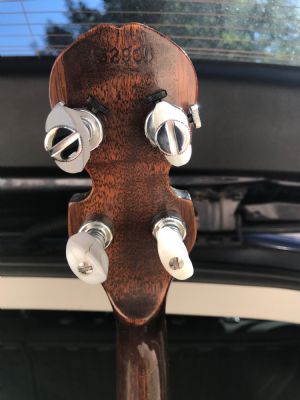 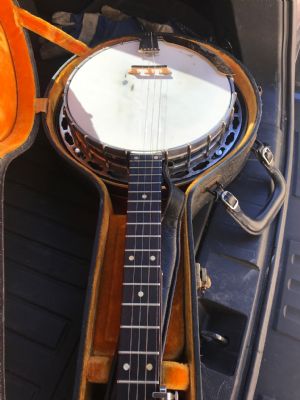 We really need more pictures, like of the inside of the rim, the back of the resonator, etc.

However, based on what I can see, it appears to be a parts banjo. The neck is an altered 60's Gibson neck. It started it's life as either an RB-100, RB-170, or RB-175 neck and someone recut the headstock to be fiddle cut.

The flange is most definitely 70's Kasuga, as I have a flange just like it right here on my desk from a 70's Kasuga.

More pictures will be necessary to be 100% certain on this, however.

For all photos, take the banjo out of the case. The case creates shadows that hide important details.

The pot may not be Gibson.

Rarely have I seen any RB-100 Gibson pot with a Kasuga flange installed.

Of course, that doesn’t mean it’s not a Gibson pot, but it is pretty unlikely.

I don’t think a 60’s Gibson flange will interchange with a Kasuga flange.

In my experience, a Kasuga flange won't interchange with a Gibson-standard tension hoop. The hook spacing is not the same.  It's possible Kasuga changed the hook spacing on their flange before doing away with this design altogether. I wouldn't know.

RB-100 didn't have top/front resonator binding, which makes me think this is not the original resonator. Of course, someone could have added one binding strip. I agree we'll be better able to guess what it is when we see more photos.

I wasn't born in Kalamazoo, MI and neither was that banjo.

Possibly the neck as described by Luke, a couple posts ago....

We can't see the resonator.

I'm wondering if this might have originally been an RB-100 from the period above that has had a factory "thin rim" replaced with a rim, flange and parts from another banjo (perhaps a Japanese import) ??

Need to see more pics, resonator inside and out, rim inside, etc.

Thanks gentleman. I was told it was a 60's Gibson banjo, I bought it from a lady who was selling her fathers gear for his estate.

I don't believe she meant to mislead me, I am sure she had no idea.

I searched the web earlier, and didn't find any similar banjos, so I headed here to the expert arena.

I appreciate the information, and will get some better photos tomorrow. 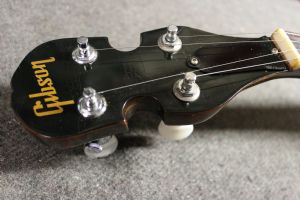 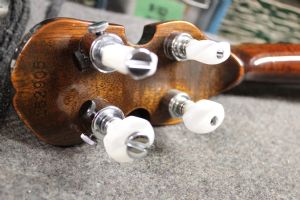 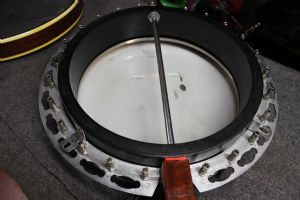 I think you gentleman are correct, no tags or indication the resonator or flange, or tone ring is Gibson made.... 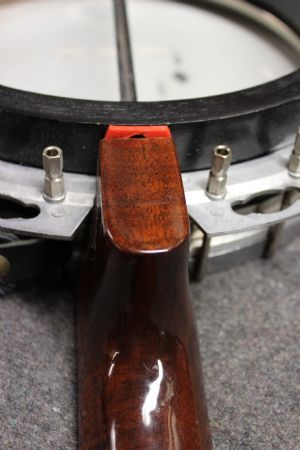 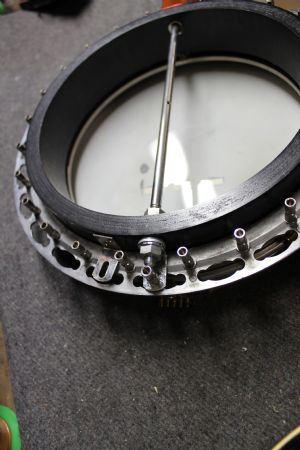 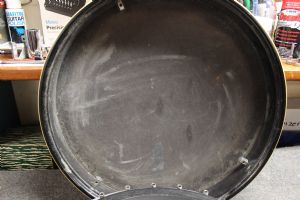 Mike, by chance are you with Blue Dog Guitarâs ?

The neck is probably the most valuable part of that entire banjo.

the keith tuners might be actually. I"m not sold on the neck being real, its certainly been mutilated.

Heck, you guys are tougher than the folks on the Steel Guitar Forum....

Anyway, I guess it is what it is. Curious why I have read about 60's RB100's having fiddle cut headstock?

Anyway, I guess it is what it is. Curious why I have read about 60's RB100's having fiddle cut headstock?

Because as commenters in your linked discussion said, after using a guitar-style paddle headstock in the '50s and most of the '60s, Gibson switched to a fiddle cut headstock in '68 or '69 -- before using it  throughout the 1970s.

THAT fiddle shaped headstock was a replica of the most common one used before WWII.

YOUR fiddle shaped headstock is nothing like that. As mentioned before, the tip of the headstock on your banjo retains the distinctive center of the "open book" or "moustache" cut of a Gibson. guitar headstock.  Also, the side contours of the fiddle-shaped part are not the same as the 1970s Gibson fiddle cut.

Thanks for clearing that up, Old Hickory. I now “get it”

Leslie - I am not affiliated with that company.

Thanks for posting more photos.

The pot really looks like a 1970s Kasuga product to me. Biggest indication of that is the way the inner/bottom edge of the tone ring does not sit on top of the rim because the inside wall of the rim doesn't extend high enough for that and instead tapers up into the underside of the tone ring. This is Kasuga's famous slop fit.

RB-100 did not have a tone ring and its rim would need to be cut to accept one. The shape of this one is not what would result from modifying an RB-100 rim to take a tone ring. So I'm certain this is the Japanese-made rim. I can only assume the tone ring is also the original Kasuga and not some upgrade, but I don't believe there's any way to know.

Also, only one coordinator rod.

You mentioned above the parts don't have any identifier of being Gibson-made. RB100 wouldn't have any Gibson i.d. on the wood or metal parts (other than the name on the peghead).  A Gibson flange from this era would have a Doehler casting mark on the underside in the area hidden by the heel of the neck. First string side, I believe.

the keith tuners might be actually. I"m not sold on the neck being real, its certainly been mutilated.

The neck looks like an authentic pre-70s RB-100 with the peghead reshaped from guitar/paddle to fiddle. It would be really unusual to fake something like this.

Just saw the pics in a larger screen. There's a dip at the top for the gull wing â a fiddle cut would have a point instead of the dip. That is definitely a modified paddlehead, no question about it. A new neck would not have that mistake.

Thanks for all the insight, I didn't realize when I asked that there would be more than a simple answer of what year the serial number indicated...

I am still curious if anyone wants to chime in what year the serial number on the neck does indicate it was built in. # 152905.

I paid $400 for this banjo w/OHSC and another banjo with a case, so I think I'm happy with the end result.

For what it's worth, a 40 year banjo picker was over last night, and he got to pick on this banjo, and he really liked it, thought it sounded great... :-)

Two banjos with cases for $400? And at least one of them sounds good? You got a good deal. Enjoy the Frankenbanjo. It has an interesting (albeit unknown) history.

Thanks for all the insight, I didn't realize when I asked that there would be more than a simple answer of what year the serial number indicated...

I am still curious if anyone wants to chime in what year the serial number on the neck does indicate it was built in. # 152905.

I paid $400 for this banjo w/OHSC and another banjo with a case, so I think I'm happy with the end result.

For what it's worth, a 40 year banjo picker was over last night, and he got to pick on this banjo, and he really liked it, thought it sounded great... :-)

Time to declare victory and move on. It's a mutt but there's nothing wrong with that if bought cheaply enough — and that you did.

With Gibson repeating serial numbers in the '60s, the best that can be done is a guestimate of two or three different years when that neck might have been made.

'Would it be realistic to turn a 4 string banjolele into a mini 5 string?' 4 hrs