This weeks tune is a modern composition by Lynn “Chirps” Smith. I recalled the title some time ago from a jam out east, but hadn’t really learned it then. A while back I ran into it again on an album and it became an immediate earworm. That’s when I discovered it was a tune composed Chirp. Here’s a video of him playing it solo: https://youtu.be/UWLgXUnUxOc  Another with Steve Rosen and the Volo Bogtrotters that includes Rosen’s Nail That Catfish to a Tree: https://youtu.be/t2nb4STmz-M

Here’s a great version from Julie Metcalf–Fiddle; and Joel Wennerstrom–Banjo:

Lynn "Chirps" Smith has played fiddle & mandolin for over forty years.  He specializes in playing Midwestern dance tunes.  Over the years he has played mandolin with the Indian Creek Delta Boys (with fiddler Garry Harrison), The Polecats (with fiddler Mark Gunther), and fiddle & mandolin with The Volo Bogtrotters.  Current bands include dance bands the Little Egypt Pepsteppers and VigorTones, as well as his latest group, the New Bad Habits.  Chirps has played square & contra dances for almost as long as he has played fiddle.  Early on he cultivated a strong interest in Midwestern fiddle music- he is, until recently, a lifelong resident of Illinois after all.  The Delta Boys searched out senior fiddlers in IL and collected & learned many fine old tunes.  He has learned a lot from fiddlers in the surrounding states as well and is learning tunes from Wisconsin, his new home state.

Mississippi Palisades is in the key of G, so standard tuning for banjo. The A part of the tune goes melodically below the scale of a 5-string. It’s a fairly easy fudge to play though. You can also play the A part up an octave as indicated by a 3rd part in the tabs I've included.

My friend Paul Kirk, playing fiddle in this video, contacted Chirps to find out more about himself and the tune. Here is an excerpt from that:

I made Mississippi Palisades on my banjo with minstrel-style strings that I keep in the G equivalent of open-C tuning (from the 5th string- EGDGB). I first recorded the tune as a banjo-fiddle duet on 7 April 2004 for "Chirps' Home Recordings, Vol. 2," CHR-02 (2004).

It has been recorded since by Rhys Jones, Eric Christopher (of BG band The High 48s), a band I am in, New Bad Habits, and others. 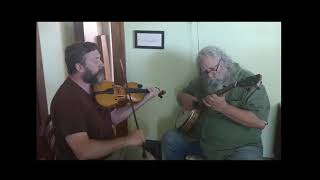 It's fun being TOTW coordinator and sometimes getting a preview of the tune to be presented.  Stephen was kind enough to tell me that the original tuning for Mississippi Palisades by Chirps Smith was on a minstrel-tuned banjo. It was in open C (gCGCE), but tuned down to make it come out to the key of G.  So I did my arranging on a Gold Tone cello banjo. When I listened to the solo recording of Chirps, it seemed like the A part was crooked, but it's not. Great tune!

I had to look up where the Mississippi River runs and note it's adjacent to Illinois, where Chirps is from.  Now I can deduce where the title came from.

Stephen and Paul Kirk do their usual excellent job of dueting another one of the many superb tunes they present each week.  One place to find them is on  Paul's YouTube channel.  An interview of Paul about his TOTW presentations is here on Old Time Central.  I love their taste of old-time tunes. Rare gems are always being uncovered, along with historic background.

Lovely job as usual Janet! Your rendering is much more accurate melodically. I find the tune very appealing for banjo.

Thanks also for the shout out for Paul's Old-Time Tune of the Week page. Paul really enjoys learning and playing lesser known tunes. When I first met him he was exploring tunes from an older collection: Marion Thede's The Fiddle Book. That was published in 1967, but she collected the tunes directly from players in OK and MO in the 30's and 40's. Tom Sauber did a cassette in the 90s I think of many of those tunes. Paul has played a huge number that he learned from the book and has researched many of the fiddlers. So I learned a lot along the way playing with him.

I haven't confirmed the reason for the title Chirps Gave this, but I found out there is a state park called Mississippi Palisades in Illinois which is his home state.

How curious that a friend was just asking me about this tune yesterday, and I had just dusted it off last night after not playing it for a while. Fun to play solo, in an ensemble, or in a jam.  Anyway, here is a recording of me, and a tab of my version from five years ago.

Thanks Stephen, this one brings back warm memories, and hopes for more good memories to be made.

And if anyone wants to geek out on the geology of the Mississippi Palisades: https://www.ideals.illinois.edu/bitstream/handle/2142/42839/guidetogeologyof2001fran.pdf?sequence=2&isAllowed=y

For me, this tune is structured way too much like Nancy to learn seperately.

'Would it be realistic to turn a 4 string banjolele into a mini 5 string?' 5 hrs