I have a lovely 1926 (87691) Vega tenor conversion (unknown neck builder but very good workmanship). I love this banjo and I want to know more about it. I heard that Vega put scalloped tonerings (electric tonerings?) on Style Ns for a couple of years in the mid-20s, that before this time they would have been marketed as Grand ... Somethings? Does anyone know more about this, the actual flow of Vega models and parts?
Keith

In 22 years of working on Vega banjos, I have not seen or heard of any such thing.

Are you referring perhaps to the scalloped support on the Whyte Laydie tone ring? Yes, very much like the scalloped tonering on a Whyte Laydie.â The numbers on dowelstick and rim match, and the tonering shows no sign of ever being replaced. 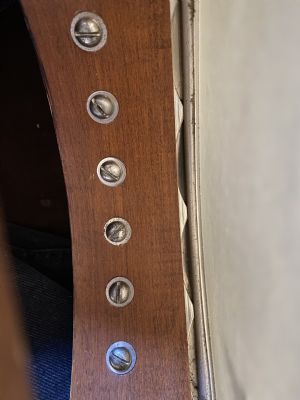 What is perplexing is that if this banjo is in it's original condition, the fact that an Electric ring was placed in a Style N seems to be quite incongruous. By that I mean that if the customer wanted an electric ring and did not want the standard Style R, why would he choose a model with a one piece neck and an ebonized fingerboard?

Another scenario is that the customer already had an N and sent it to the factory for a tone ring upgrade.

In a while I will post more pics. As it was explained to me a few years ago by Richard Johnston of Gryphon (the info coming from his partner Frank Ford) is that for two or three years Vega used scalloped tonerings on their style Nsâ¦ but i forget the details. Iâll ask Richard/Frank again and post. â I just got out my old Vega catalog and I think itâs coming back to me. My pot looks very much (exactly?) like their earlier Imperial Electric. If my memory serves (sometimes it doesnât) they folded the Imperial Electric into the Style N around 1925.

Vega did not install scalloped rings in Style N banjos with any regularity. It's possible they did one as a custom order or an after-the-fact upgrade.

It's also quite possible that it was added by someone else, since the only routing necessary to install the scalloped ring is hidden by the original "half spun" cladding. I've seen that done a few times.

Vega produced a lot of "floor sweep" banjos in the mid '20s. Although my Imperial Electric plectrum had the correct notched stretcher and 28 brackets and was 26"/10 3/4", I saw one with the next consecutive serial # with a 27" pot and a Style N/Senator grooved stretcher with 26 brackets but it was marked as an Imperial Electric, not a Senator as it had the scalloped ring. My IE and mid '20s Senator had identical fretboard wood and inlays.

Do you know that your banjo was originally an N and not an IE as I described above?

Since the Imperial Electric did not have a corresponding tenor, it's not out of the question that it could have came from Vega like this, I suppose, but we'll never know. If Richard has seen others, perhaps a local dealer like Sherman Clay took some off Vega's hands. They had 25 stores in the West including San Francisco, Oakland, San Jose and Sacramento.