Can someone provide any information about my grandfather's (born 1879) Clifford Essex 6 string banjo? He brought it from Scotland to Canada around 1911 so this instrument is at least that old. The nut may have been changed because it only has 4 string grooves in it; has 22 frets. Is it rare or collectable? I am a guitar player so know very little about banjos but it seems unusual to me that an old banjo like this has six tuning keys? Any sources for information or advice would be appreciated. Thanks, -Canduck

Pictures of this banjo are the only way to get any useful inforamtion about it.

I agree that photos are needed, but having said that, I have seen banjos use standard guitar tuners (3 on each side), and not use them all.
Is there a short string tuner on the side of the neck, or is everything happening up at the peghead?

I am 99.99% sure, without seeing photos, that this is going to be a zither banjo.

It is a 5 string, they used guitar tuners (three on a plate) for symmetry (so they claimed).

Sorry, I should have added photos earlier. No tuner on the lower neck at all. Here's three photos. Thanks for early responses! -Canduck

Clifford Essex plus London address is pressed into the side of the neck where it attaches to the body. 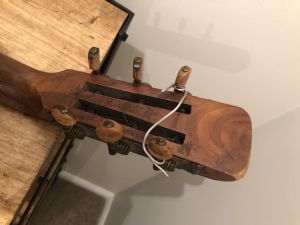 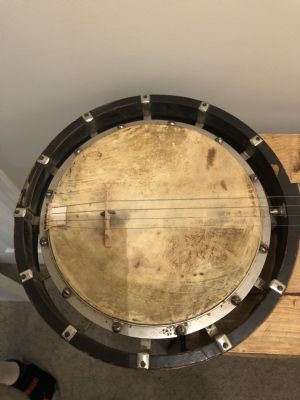 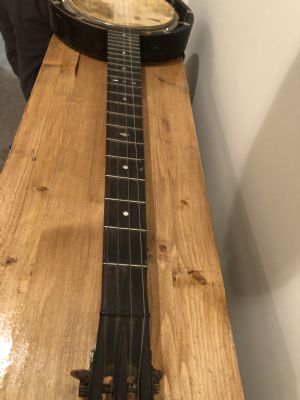 Yep, zither banjo. 5th octave string dips into a tube at the 5th fret and comes out through the peg head to the tuner.

Sadly, there is basically no value to these as there is no demand. $100 to $200 in ready to play condition with no issues. Due to the construction they tend not to age very well.

I am sure someone will chime in that knows more than me, but zither banjos were very popular in England--- then they were not. There were thousands and thousands made all the way until WW2 stopped production. Availability today FAR outweighs demand.

From the three photos, this one looks well worn.

As far as the banjo itself, they were strung with a thin wire first, second and 5th string. The third string was gut and the fourth string was copper wound over silk. Today nylon 3rds and wound over nylon floss 4ths are used.

They were designed to play the standard "classic banjo" repertoire of that era but some composers like Alfred Cammeyer (who developed the zither banjo) wrote music that took advantage of the different string voices.

If you want to hear one played search youtube for "Olly Oakley banjo".

You can find out more about them (including books that teach you how to play and a near unlimited amount of music) here...

You could also search through the BMG magazines (published by Clifford Essex) on that site to fine the model of your banjo.

Very helpful Joel- thanks. I won't waste me time and $ to restore it then. But as a 'wall hanger', it will continue to provide our family with memories of our great great grandfather!

Looks like it just needs a good clean, a new set of strings, and a drop of light oil on the tuners. Use light gauge banjo strings or get a proper zither set at http://www.cliffordessex.net/index.php?_a=viewCat&catId=33

They were designed for 'classic' banjo. But my first banjo was a zither and I worked my way through all the folk banjo books available in the late 60's and 70's before I got a 'normal' banjo.

Something that might be worth considering is that this style of construction (that odd rim and tension system) can be capable of sounding 'better than it looks' by which I mean, they sometimes look to be in terrible shape but actually clean up relatively easily. Generalising a bit, as there are a lot of makes and specific details vary. The general basics of pot and head are not complicated, and whilst they will not sound like a modern banjo (some Mungo Jerry records would be relatively recent examples of one, but no idea if it's 'as constructed' or changed a bit) it also is not so much work to get them to a half decent working condition. Things like the nut, bridge and tuners are able to be sorted out if necessary. There's not a lot complicated in the head and tension system they used. I have a similar style pot on a 20's or 30's probably generic instrument, originally 8 string but had been 'turned into' a banjo uke by the time I found it. The main thing wrong with that end of it was where wood had been damp and screws didn't bite properly. It's currently got a goatskin head and is playable. I found it in a box of junk in a flea market years ago. All of that depends on the actual exact state it is in, and on the assumption that the neck is OK. In my example of course, it has a shorter neck to worry about. I made a nut from a bone blank for now, the frets are often a bit prone to ending up in odd positions relative to the wood, but can usually be put back.

Many thanks to everyone that provided me with the information that I was looking for! Cheers, -Gord (Canduck)