Hello, and thanks in advance!

Somewhere in this post should be photos of a resonator I recently purchased on eBay.  I didn't really need/want a resonator but I figured I'd never see one that matched my openback for next-to-nothing again.  My banjo is a Grafton (comparable to a GoldTone), with 2 co-ordinator rods.  I'd like to be able to attach the resonator and remove it reasonably easy and cheaply.   I've found this thread with conduit-hangers and this bracket available from GoldTone.  (I also found other old threads with broken image-links)  These both look fine for being simple and not actually altering the instrument (eg adding brackets, screwing something onto the rim, etc).  I wouldn't mind screwing something into the cheap resonator but wouldn't want to do more than, say, hot-glue some magnets to the rim (ie quick/cheap/easy/easily-reversed).

Are there any other options to consider?  I'm not going to make it a regular thing in a professional setting, just playing by myself at home, but I'd like to do something a little more stable/pretty than tying it on with twine.  Thanks! 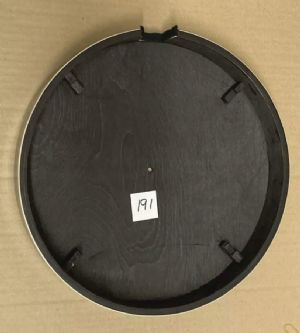 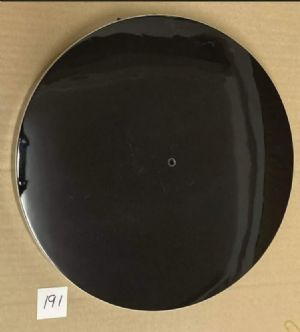 I've never altered a conventionally (?) mounted resonator, but on occasion I tend to think out loud.

Could the "guts" part of a cupboard latch 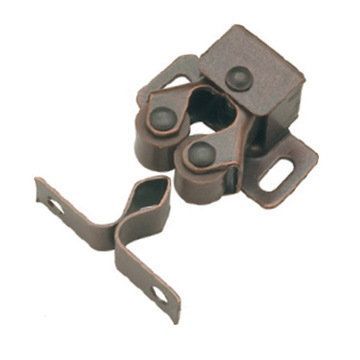 be modified to work?  [i.e. would it be worth the piddling around?]

There are  poly (?) gadgets that work similarly [I don't know what they're called.... I've seen 'em on the undersides of folding tables to hold the legs in the folded-up position].    Good luck... I'm sure other/better suggestions will be presented.

Since you already have a resonator with a hole in the center, I think the Gold Tone bracket is the way to go.

I have used the conduit clamp on a vintage Harmony resotone 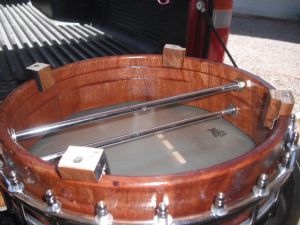 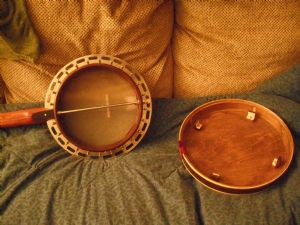 Owen Barnacle Joe
I've used those old-fashion cupboard latches to attach backs for my own nefarious purposes. However, they were all lighter than a standard resonator, and the banjo was mostly sounded when it was in a stand. The latch is on a threaded rod (long screw) with a nut tucked inside the latch. There's a photo of one (Fig. 4, p. 12) in the bottom, December 2013 entry at its.caltech.edu/~politzer/ . In addition to the one pictured there, I've used them with 1/2" plywood flat disk "resonator" backs.

In my applications, the spacing between the rim bottom and back was an important issue. That's also absolutely crucial for a resonator back. the one pictured above by Barnacle Joe has the spacers already mounted.

My Nechville Moonshine has a resonator that friction fits on. Four wedge shaped blocks inside the resonator.

Helix (He asked.)
The total depth, in and of itself, effects the internal pot resonances, (There's always a lowest one, and they go up and up in frequency and certainly impact the sound of the banjo.)

The "gap" is a crucial component in what is typically the very lowest resonance of the whole banjo. Conceptually, it was described by Helmholtz, but the simple equation usually presented does not apply in detail to real-world situations. Nevertheless the basic phenomenon does.

In particular, there is an enclosed, big, total volume, V, and a sound hole. The sound holes on guitars and violins are the obvious ones. On a resonator banjo, it's the gap, the flange, and the resonator edge. On an open-back banjo it's variable. :) It's the air opening between the rim and your belly. (With flat disk resonator backs, it's just the disk-rim gap.)

In the simple picture attributed to Helmholtz, the sound hole is characterized by the area, A, of the interface between the big volume and the sound hole itself. OK, on a guitar with a round hole, it's the area of that hole. However it also has its own volume, v, which is A times its length, L. (See more on the trouble interpreting v, A, and L in real situations below.)

The Helmholtz resonance is what you hear when you blow across the mouth of a bottle. The ideal formula tries to estimate its pitch. The formula is ambiguous for a longneck or wine bottle. If you try a stout bottle with an abrupt, straight, cylindrical neck, you do better. That cylindrical neck seems to have a definite A and v = A x L. On any real bottle I've found, it's hard to get a precise measure of A and L. If you look closely, you don't know quite where to begin or end.

The neck air goes in and out a lot when the interior volume expands and contracts a little (because V >> v) -- both at the same frequency. It's the motion of that neck air under the influence of the compression springiness of the enclosed air that creates a definite oscillator.

For that guitar sound hole, L is certainly much bigger than the thickness of the soundboard. It's got to be something like how far the in-out disturbance protrudes above and below that board. Other types of experiments suggest its a significant fraction of the diameter (e.g., ~0.3 D) -- maybe on both sides. On a resonator banjo, it's just wishful thinking. When all the air inside the pot expands and contracts, the neck is the volume of air that gets pushed in and out through the gap and the flange.

So, the gap is part of the geometry that establishes the banjo's lowest resonant frequency. All other things (e.g., the effective V and L) being equal, a bigger gap means a bigger A and a higher resonant frequency (proportional to the square root of A).

A simple guess for A on a resonator banjo is the gap times the circumference of the rim.

David, any thoughts on lowest desired resonant frequency, or typical values? I'd like to determine a reasonable gap for a flat plate resonator on an 11 inch tenor set up for GDAE.

Now everyone is better informed.

Is there a short quiz later.

Parker135
Players and builders are way ahead of scientists on questions of desirable instrument design. (The top of my banjo physics Web page has a quote from S.S. Stewart to that effect.)

What sounds good or best is certainly up to you, and there's never total agreement. In the spirit of banjo being "the hot-rod of musical instruments," some people like to fiddle with that gap adjustment in real time on their own instrument -- hence, inserting washers or seeking out the now extinct Raejusters. On the other hand, resonator banjos have evolved according to people's preferences, and there is a rather limited common range. The obvious, millenia-old strategy is to copy something you like or that's OK. The perceptible differences are very subtle.

It's possible but technically pretty hard to measure the resulting frequency with good audio software. I've done it with open-back banjos. That's where my synthetic belly came in. I can set it up with a particular gap and measure to my heart's content. It's shown in the accompanying photos with a Deering Sierra. The issue then was to identify what resonator backs actually do by contrasting one with the same banjo played as an open-back. (That's in its.caltech.edu/~politzer/reso...nator.pdf and its.caltech.edu/~politzer/reso...or-2.pdf.) As usual, the answer was something everyone already knew -- except that folks don't actually agree on what that is.

A short answer to Parker's question: For a flat-plate resonator back, I'd start in the vicinity of 3/16" and mess around with it a bit. 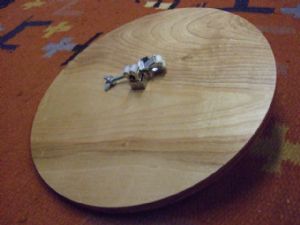 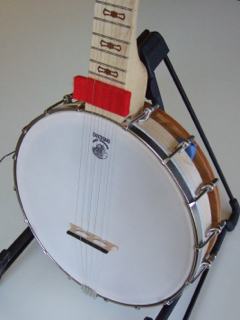 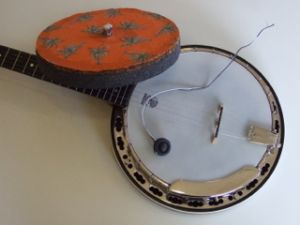 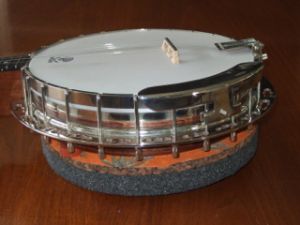 Thank you, David! This is really interesting. My experiment will also be on a Goodtime; a tenor in this case. It's become my sort of "try stuff" banjo. I installed a truss rod and new fingerboard on it a few years ago. I have the Deering resonator for it, but I've been really curious about the flat plate design.

OP, sorry this has drifted so far from your question. At least David's photos include his mounting scheme. Let us know what you come up with. I'm probably going to make up something from a piece of maple to slide onto the coordinator rod with an embedded nut, and use three or four pieces on the resonator plate that extend into the pot to keep it centered.