I did not see this one in the Master List, but then I forgot about the Marmaduke connection, so this is a 9 year revisit I guess. I learned this one over on the Fiddle Hangout (in 2014) when they were still doing the Virtual Fiddle Festival. Unfortunately, I can't seem to pull up the discussion from then. In my notes I wrote "from the playing of Norman Edmonds and Charlie Acuff" but now, because of the mystery of the internet, I can't find any online recordings of either . According to Country Guitar Online: [“Cricket on the Hearth” dates back to the Civil War. The song was made popular by East Tennessee fiddler Charlie Acuff. At the age of 12, Charlie learned to fiddle from his grandfather, Charlie Boyd Acuff, and one of the songs passed down was “Cricket on the Hearth”.  Since then, this tune has been recorded by several artists...] So there you go.   Here's a tidbit about Charlie from the Tennessee Arts Council:  "Like his famous cousin Roy, Charlie Acuff (1919-2013) came from Union County. But whereas Roy became famous as a country music entertainer, Charlie devoted himself to a deeper mastery of old-time fiddling. His dedication was evident from the beginning, as he had to learn left-handed. He always played widely, for square dances and on the radio, but he balanced his music with a 40 year career at the Alcoa aluminum plant. After retiring in 1982, Charlie performed regularly for old-time music audiences, including those at the Festival of American Fiddle Tunes, and shared his large repertory of tunes with countless students. His sharp recollections and warm personality made him one of the best-loved musical figures in East Tennessee."

And since we're told to look at this entry, here it is:

MARMADUKE'S HORNPIPE. AKA - "Marmadike," "Marmaduke's Reel." AKA and see "Damon's Window/Damon's Winder," "Dan Jones." American, Reel (cut or 2/4 time). USA; Arkansas, Missouri. D Major (Christeson, Devil's Box, Phillips, Silberberg): D Mixoydian {'A' part} & D Major {'B'part} (Songer). Standard tuning (fiddle). AB (Silberberg): AABB (Christeson, Devil's Box, Songer): AABB' (Phillips). Missouri fiddler Howard "Rusty" Marshall reveals that Missouri oral tradition gives that the tune was named for Confederate general John Sappington Marmaduke (1833-1887), son of pre-conflict Missouri governor M.M. Marmaduke, who was "from a dynasty of Little Dixie tobacco and hemp farmers, slave holders, and politicians." More political appointee than warrior, Marmaduke and his outnumbered, outgunned rebel forces were soundly defeated at the battle of Boonville in June, 1862, resulting in surrendering control of the Missouri River to Union forces. He led a regiment at Shiloh, and participated in Price's raid in Missouri during which he had two horses shot out from under him at Little Blue. He was wounded and captured at Marais de Cygnes in October, 1864. Despite his lack of success in the martial arena Marmaduke was, like his father, elected governor of the state after Reconstruction, serving from 1885-1887. He died in office.

The melody has been popular for fiddle contests in the Mid-West, although less heard today. "Marmaduke's Hornpipe" is one of '100 essential Missouri tunes' listed by Missouri fiddler Charlie Walden. "Local fiddlers in central Missouri have mentioned this tune was propagated by Daniel Boone Jones, a widely remembered fiddler from Boone County, who represented Missouri in one of Henry Ford's national contests in the late 1920's" (Christeson). The tune was so closely associated with Jones, who was a highly influential regional fiddler in the early 20th century, that his name was an alternate title for his contest-winning version. "Cricket on the Hearth," "Grand Hornpipe (1)" and "Rocky Mountain Goat" are melodies thought to be reminiscent of "Marmaduke's" and perhaps cognate. According to Gordon McCann (2008), a number of older Missouri fiddlers call the tune "Cricket on the Hearth." Guthrie Meade (2002) mentions the tune in connection with Ozarks fiddlers Cyril Stinnet, Vesta Johnson and Buck Williams, and notes similarities with "Deer Walk" and one of the "Hell Among the Yearlings" tunes. "Damon's Winder" is a nearly identical melody, save for the 'C' natural notes played in the third and fourth measures instead of a 'C' sharp. The only 78 RPM era recording of the tune was under the title "Hell Up Flat Rock," by Jess Hillard in 1933. See also Harvey "Pappy" Taylor's (Effingham, Il.) "Straw Bonnet", which resembles "Marmaduke's" in one strain.

The original "Marmaduke's Hornpipe" entry to the TOTW is worth going back to, as vrteach gives a rundown of the Dickens tale of the same name (Cricket, not Marmaduke) and provides a few more sources.

Overall, as a result of his recording of it, the tune seems to be more associated with Kenny Baker these days (unless you're from Missouri), and it seems to be played 3 finger most of the time. Some tab available here on the BHO:

And because I love them dearly, here's Claire and Walt. sadly, Walt is not playing the banjo in this one.

I notice that all of the versions online are like Kenny's version; mine is not, at least in the coarse strain.  Here's my buddy Paul and I playing it.  I heard from Paul's wife (who works with my wife) that he may have grumbled during his practices after I suggested he learn to play it clawhammer as opposed to a BG three finger style, which is his forte.  While listening to the playback of one take (there were three, this is #2) he said, "Hm, sounds like I'm playing three finger there," so he must have gotten over his grumbles.

Have fun and play nice.

Cricket on the Hearth

I learned Mud Fence from this recording but every time I called it at a jam folks would say "sounds like Rocky Mountain Goat"  so I eventually gave up on the Mud Fence title and call it Rocky Mountain Goat now.  It saves time and the tune plays the same whatever the title.

A fine tune, and youâre right about Missouri and three-finger style. Iâve always called the version with banjo harmonics and fiddle pizzicato âCricket on the Hearth,: and the one without those âMarmadukeâs Hornpipe.â It was common in Missouri when I was there, under the latter name. Incidentally, neither Vesta Johnson nor Cyril Stinnett was from the Ozarks. Vesta was from northwest Missouri and Cyril settled in the northeast part of the state, adjacent to âLittle Dixie.â Their fiddling reflected that. Clearly different from say, Gene Goforth or some of the southwest Missouri fiddlers. Charlie Walden and Prof. Howard Marshall are the authorities on Missouri fiddling. Marshallâs three books (one forthcoming) are the go-to scholarship on the various Missouri styles

A nice choice for TOTW, Billy, I love the version you have posted with your pal Paul. I posted my three finger version here on the BHO about nine years ago, anyone interested can find it in the BHO Video Library, but I get the message, you only want clawhammer versions in this thread. Tell your friend Paul he has my deepest sympathies.

Nah, I like three finger picking, especially yours, Don, always so tasteful. Mostly I just didn't want Paul to get too 'out there' with it, keeping it accessible to the OT players who might not play it due to the tune's lack of clawhammer versions online. I even suggested if he'd prefer he could play it three finger, but he said in the end he enjoyed the challenge and was very pleased with how it came out.

Incidentally, neither Vesta Johnson nor Cyril Stinnett was from the Ozarks. Vesta was from northwest Missouri and Cyril settled in the northeast part of the state, adjacent to “Little Dixie.” Their fiddling reflected that. Clearly different from say, Gene Goforth or some of the southwest Missouri fiddlers. Charlie Walden and Prof. Howard Marshall are the authorities on Missouri fiddling. Marshall’s three books (one forthcoming) are the go-to scholarship on the various Missouri styles

That was Tune Archive's error that I should have caught. As an Iowa fiddler, I'm very aware of Missouri's distinct styles and am a big fan of Mr Stinnett's.

Thanks for a thorough write-up and nice and lively performance of your own, Billy.  I like hearing all the various styles and interpretations -- something that makes our music so refreshing.

Roscoe Parish (also spelled Parrish) appeared on my laptop itunes, making it a good reason to learn a different version from the one I'd arranged from Kenny Baker's.  Roscoe has a flatted note in the B part, which makes it unique.  He said that his father's cousin had played it -- Eldridge Payne (being a relative of the Payne's also made Roscoe a relative of Tommy Jarrell), but that he was much older and had passed away.  Roscoe himself lived from 1897 - 1984, so I'll presume the tune was passed around in the 1800's.  I chose to go up an octave, rather than down for the B part.  Both ways work.

For comparison, here's the mp3 of my Kenny Baker-inspired arrangement.

Cricket on the Hearth 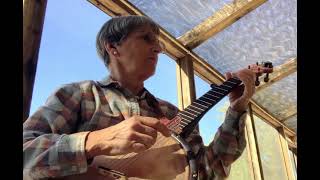 VIDEO: Cricket on the Hearth ( TOTW)
(click to view)

'ARE RADIUSED FINGERBOARDS DESIRABLE ON OPEN BACK BANJOS?' 12 hrs