I was mesmerized by Nora Brown's harmonics and have been DYING to learn it. I hesitated first because of the harmonics and then because I've been parked in open G tuning for months now and I'm quite comfortable there.

But I couldn't resist any more. I found it in the Schroeder two-finger book and just had to take a whack at it.

So I'm going to leave it in this tuning for a while and just really work on it for as long as it takes - it's such a pretty tune.

Here are my 7th fret harmonic questions:
a) is there a known common problem for newbies?
b) I'm focusing my attention on my left hand - but is there a picking detail I should be thinking about?

Here is my f#DEAD question:
If I'm going to leave it in this tuning for a while, any other fun tunes for a beginner?

Also - besides Nora, I like this guy who mixes clawhammer and 2-finger. I could listen to these 5 minutes for 5 hours without taking a break:

A couple more versions you should listen to.

Be sure when playing the chimes (harmonics) that you're making contact with the string but putting absolutely no pressure.

I was also going to suggest Mike Seeger's version (in the liner notes to his Southern Banjo Sounds, Mike mentioned that he thumbed the first string harmonics to match the sound of the ones played on the inner strings). Mike's source is Dee Hicks; you can hear a recording of Hicks here.

"Graveyard," as played by Cousin Emmy is in the same (relative) tuning and similar.

thanks - my Lost Gander playlist is now up to 14 tracks - listened to it twice, but you know banjo tunes - then I still had like 2 more hours of commuting - but man - good stuff. I immersed myself in ideas - and now it's time to reward myself for a good day at work with a little banjo practice.

I love harmonics on the banjo and use them a lot, it isnât a difficult technique if you keep your finger relaxed.... 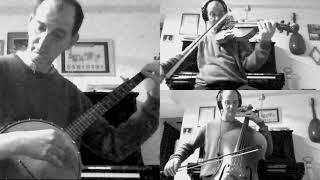 Yes - they are beautiful on the banjo! I always had a soft spot for them on viola - I like them in general - but on the banjo... it's like a whole-'nother level.

'ARE RADIUSED FINGERBOARDS DESIRABLE ON OPEN BACK BANJOS?' 12 hrs