I suppose this is the proper place to put this thread, apologies if not. OK, so I'm a newb to banjo world, but not to music by any means. Longtime pro bassist and sometime guitarist who bought a Dean bottlecap 6-string because it was cheap and I thought it would be good to use for a couple hard rock tunes I've been writing for fun, and banjo ended up taking over the project. And despite most bassists using nothing more than a little compression at the most, I love effects on bass. That carries over to my newfound love of banjo. I'm down with the purist approach, but I've never been a purist about anything regarding music and never will. So purists may not want to read further, but I'm having a blast and that's what counts!

I'm not going to pretend to be a great guitarist by any means, but I'm not bad, and I've managed to get this banjo into as good an acoustic shape as it'll get till the new bridge (Archie by Bart Veerman) arrives, so tonight I was working on the amplified side with its KNA piezo. For a cheap pickup, it's better than I expected. Won't ever replace a mic but will do for my purposes.

So tonight I felt I was ready to play with effects. Went through everything on my bass board and pulled out some pedals I wasn't using to try out. Obviously the reverb and delay work for banjo. Chorus can sound pretty at times, though it reminds me of the 80's a little too much. Envelope filter/wah can be cool at times. It was fun to try to pick through the riff in "Blu-Bop" by the Flecktones with it.

Compression did nothing for me, and the digital upper octave I might find a use for in the future but not really wowing me. Doubt I'll use the MXR Vintage Bass Octave since it's more synthy sounding, though if I ever decide to drop a dubstep breakdown into one of my songs, it'll be the first pedal I go for.

Overdrive and distortion are what's really tough to get to work with banjo, as anyone who's ever tried it knows it just ends up sounding like a guitar the more dirt you add. So tonight I went through all the dirt pedals I have, plugged them into my little Crate Power Block head, and busted out some headphones. Most of them, even the Rat-based pedals I use regularly on guitar and bass, were not good. But I managed to find two really good ones and one that was absolutely exceptional, so I'm rejoicing in not having to buy any more pedals!

The two really good ones were the Tech 21 modded British and the early 80's KMD overdrive with crackly knobs in the lower right hand row off the board. The British was better but the KMD had some good sounds as well. At lower drive settings the British retains more banjo flavor, and add a little bit more and it does a good imitation of the late Malcolm Young from AC/DC. At higher settings, it sounds like a guitar thru a Marshall, but it's got a lot of versatility thanks to the character and mid knobs.

The exceptional pedal was the little no-name pedal next to them. It's a Greedtone overdrive clone built a few years back by my friend John Kallas in LA. He likes to take guitar pedals and mod them for bass, but he also leaves a stock setting available. With the stock setting, it sounds amazing and retains a lot of banjo flavor even at higher settings, but excels at just giving the clean sound a tiny bite of crunch. A lot of Tele and Strat players like it because it's great with single coils to give the clean sound a little edge, and it loves tube amps, as do I. It even sounds great without cutting the high frequencies past 5k if you don't go too far with the drive.

I am a happy camper tonight! Between the Greedtone and the British, I've got all my dirt needs covered, and I don't have to spend any more money on pedals! Yay for me!

And don't worry...I am still practicing my fundamentals of proper fingerstyle for when I get good enough for a "proper" banjo. But I'm already good enough to do what I need to do, so once I get the new bridge I'll be off to the races, making music with banjo that most of you will be reviled by :D 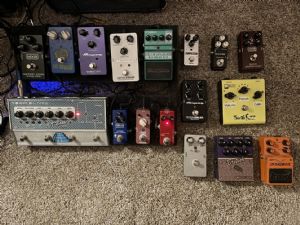 Been fooling with effects for years. My studio cal mesa boogie overdrives by itself real nice. .Some time based ones can be nice on a song or 2 ,but there is always a bad knob turn or noisy chord at the exact wrong time so most of the time I ignore them.

I used a phase shifter with a hot spot contact pickup years ago. Worked well

Billy Ray Latham of the Dillards playing banjo through a fuzz tone in 1972. His picup was a Barcus Berry.

JimmyM623 --
My initial reaction to Bart's Archie was that it produced the sounds I loved when I first played banjo (almost 60 years ago) that my 72-year-old ears can't hear anymore with typical bridges. Banjo (with any bridge) occupies frequency and time domains quite different from any other string instrument. That's why your pedals, etc. produce such novel results.

For sure, stick with your guns, and don't let the banjo authenticity police stop you.

You will burn in hell for this and your banjo will become possessed by Satan.

davidppp , that is wonderful to hear about your Archie! At first I was going to get a slightly more conservative bridge, but Bart told me I'll like the Archie better since I'm looking for bright and choppy tones out of my Dean. Replacing those bad Chinese J-hooks so I can tighten the head a realistic amount was a major step in the right direction, and I'm hoping the new bridge puts it over the edge, and what you're telling me means going with Bart's expertise was the way to go.

And now that I'm getting this cheap aluminum bottlecap whipped into shape, I'm liking the sound. These Deans get a bad rap, not all of it undeserved. But just like my old Epiphone cheapo acoustic guitar from 1981, it ain't a D-28 but it records and amplifies very well. The Dean's also extremely light, stays in tune for long periods of time, and has good fretwork with fairly low action. Heard a recording last night of someone using one to play clawhammer that was pretty impressive sounding, so I'm sure I can make it work for my little rock and roll project.

'Did any company in the past make this banjo?' 10 sec