Restoring old banjo - Why is the fifth string nut in front of the fret?

Evening all... I'm restoring an old banjo (Savana Melody-Jo) that a friend of mine pulled out of a rubbish tip. I don't know much about banjos and normally work on guitars, so this is probably a bit of a stupid question. Other banjos seem to use the fifth fret as the nut for the fifth string, but this has a hole on the other side (see picture). I assume some sort of peg goes in here to function as a nut, but wouldn't this affect the intonation as it's not aligned with the fret. Any info gratefully received. Cheers! 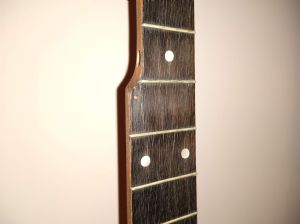 You're right. The fifth string "pip" or nut used to be there. That's probably the stump of it cut off at the surface of the fretboard.

I've seen a 21st century Chinese-made Washburn with the pip in front of the fifth fret like this one. I have no idea what that was about. But know this: Putting the pip in front of the fifth fret is only an intonation problem for players who fret the fifth string. While many do, those who never fret the fifth string can tune it to whatever pitch they want and it will be in tune.  If they should install capo spikes or a fifth string sliding capo, they'll have to retune every time they use it.

If this were my banjo, I'd have either a pip installed in line with the fret or a spike right behind it.

BUT . . . on this banjo, it appears the maker didn't leave enough room to install a pip behind the fret without crowding the 4th string. Likewise, the fifth fret doesn't look long enough to accommodate a good spiked string location without also crowding the 4th string.  I think the maker realized his mistake at the fifth fret and putting the pip in front of the fret was his only choice, short of trashing the neck and starting over.

Those Melody Jos were pretty low end mass produced banjos. I think it's just bad design and an assumption that by the time anybody got to a stage where they fretted the 5th (if they ever did) they'd have upgraded to a better banjo.

Thanks for the comprehensive info, that all makes sense. I thought there might be something I was missing and there was some greater meaning behind it all, but it very much looks like it was just ropey design. I suppose the thing to do it either try and get it as close to the fifth fret as I can, or never fret the fifth string. I've seen the spike method which then uses the fifth fret as the nut but there's not enough neck to play with in this case. Oh well... Nice one, cheers all!

Having the pip in front of the fret seemed to have been the standard arrangement on Birmingham made banjos. Possibly just a preference for slightly looser tension?

I have an old Dallas and a George Matthew that both have the pips in front of the 5th fret. There isn't really enough wood behind the 5th fret for a pip on either of them, so I guessing they put the pip in as close as they could after they had fretted them. On the Matthew the pip is actually about 1/8 inch in front of the fret and the intonation is horrible! That one looks to me like the neck was made for a larger pot and they fudged it - the 5th fret itself is actually behind the cut away. It sounds right to me that they were assuming no-one would want to fret the 5th string at the time. The open string sound is nice though.

My first banjo was a Dobson "student model" (according to the experts I consulted), with the pip about 1/2" nearer the bridge than the 5th fret. There was no wood on the other side of the fret, on which to put the 5th string pip. When it came time to learn to fret the 5th string my teacher taught me to "bend" the 5th string (apply enough side pressure to get the right note). I still retain that skill.

When I got a Regan 5th string capo. I was happy to observe that it was just long enough that if I butted it up against the 7th or 9th fret, it gave the right note. 10th fret was "good enough for folk music" -but who needs that note anyway?

Oddities like this should be considered seconds, blemishes, and floor models. Mistakes happen. This is a mistake or planned disregard for the player. GoldTone sells B models. They seem to be the singular instrument maker offering B models in email campaigns.

Another way to look at this is homemade. A tunneled 5th is found in zither banjos. To be just like American banjos the owner hacked away too much. The pip must have some real estate to operate sonically with its neighbors.

It looks the part, but it doesn’t work. Too far forward means farther up the neck and every note is sharp. “Oh, this doesn’t work. I will buy another.” To be true pitch, the previous fret and bending a 1/2 to 3/4 bend is what is required.

A common banjo axiom is "No money is made after the 5th fret." Maybe the maker had that in mind. Nah. It is a goof.