This week I thought it might be fun to do one of those great squirrelly WV tunes: Hannah at the Springhouse.


I'm playing it in A modal tuning (gDGCD capo 2) but Melvin is somewhere closer to A-flat if you want to play along with the source recording.

You could think of this as either a single part tune or a two-parts with an extra couple beats in the middle and it's kind of interesting the way that it plays with different modes. If you notice in the first phrase it has a raisedl third that has a "major" sound and then the minor third on the repeat, gives it a kind of interesting flavor.

And Canadian superfriends the All Day Breakfast Stringband put it on their recent CD: https://alldaybreakfaststringband.bandcamp.com/album/who-let-the-dogs-out

And here's my take (with accompanying tab): https://www.youtube.com/watch?v=rvK_nviT_bA

Anyway, hope that's enough to get you started on this one! Have a great week everyone! 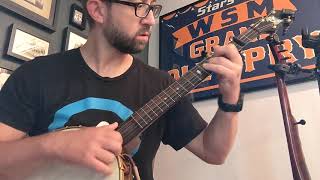 Hannah at the Springhouse

One of my favorites. Thanks for choosing the tune.

Thanks for covering a Melvin Wine tune, Adam, and providing a video and tab. You hit the nail on the head when you mention a chordal tweak in the A part.  It may even be a III chordal sound in the 7th measure.  I hear the A part played differently by various players and it's hard for me to determine which best fits the original.  I almost re-arranged the tune using a minor tuning gDGBbD, but decided not to.  I'm in open G tuning in my mp3 and think your modal tuning was another good way to go.

In this recording I was playing my very first banjo purchased at McCabes Music in Santa Monica in the 70's.  Many banjos later, it hangs on the wall and is the lightest weight banjo imaginable.

Melvin had spoken about Uncle Jack McElwain as a mentor, if I remember correctly.  Perhaps Carl can enlighten us more.

When I first learned the tune I looked up springhouse.  It's a small building over a spring to keep food cold and to keep out animals and plant debris.  Some may even have ice if it's cold enough. Hannah at the Springhouse

Hannah at the Springhouse (CH) tab

Lovely, hypnotic tune from Melvin Wine. Thanks for posting.

quote:Originally posted by JanetBMelvin had spoken about Uncle Jack McElwain as a mentor, if I remember correctly.  Perhaps Carl can enlighten us more.

The best information I have found on Melvin Wine's relationship to Uncle Jack McElwain is in Drew Beisswenger's book called Fiddling Way Out Yonder, The Life and Music of Melvin Wine.

On page 55 Melvin is quoted describing a job he had as a 17 year-old when he ran into an old fiddler, who it turns out was Uncle Jack, already a winning fiddler who had once competed and beat Melvin's father, Bob Wine.  As Melvin puts it: "Directly he said to me, said, 'Sonny, is that a fiddle over there in that case?' I had a case.  I said, 'Yeah.' He said, 'Can you play it?' I said, 'Little bit.' He said, 'Well, can you play me a tune?' 'Well,' I said, 'I can't right now...soon as they move out a little, well, I'll play for you'...and I got out my fiddle and played a few tunes for him.  He said, 'I'll tell you what I'll do,' he said, 'They're having a fiddle contest up at...Clendinin [perhaps Charleston].' Said, 'If you go up there, and if you don't win a prize, I'll give you a twenty-dollar gold piece.'"

Melvin didn't go to compete and regretted it, but got to talk more with Jack over the years.  So although Uncle Jack didn't teach Melvin directly, Melvin learned listening to his playing and sites him as one of the two people who influenced him most, his father being the other fiddler.

'Any suggestions for an online Recording King dealer?' 10 hrs