Hello everybody. 47 year anniversary of my motorcycle accident

Darn it's been a long time. I can't believe how fast time goes by and I don't get a chance to get on here. I see my buddy Figmo is still here. Glad to see it.

It's hard to believe but the anniversary of my motorcycle accident has rolled around again. You know I have to post grandpa's story like I do every year. I've lost count how many times I've posted but it's a lot. Some of you have read this a few times, some this may be your first time but 47 years ago I rode my motorcycle into the path of a speeding car. I was 15 years old riding a 125 Yamaha dirt bike. I've made it 62 in spite of motorcycle accident's, car wrecks, and a world wide pandemic. My grandpa wrote his version of the what happened that day. We found it written in a tablet after grandpa died in 1997.

I will never forget July 23, 1974
This is the date our precious Grandson was struck by a car on his motorcycle, by a man named Oscar Newby, who was a hit and run driver, or either stopped and went ahead.

On this date the last thing that Randy helped me do was to load an air conditioner in the car, and I thought to myself what a strong boy he was, and always a sweet boy.

This is what happened after we ate supper. Randy went out and got his motorcycle. Lola Mae and I were watching the news on TV. A few minutes after 6:00 P.M. on Tuesday July 23, 1974, Leonard Pigg came up to our house, and it was evident by his actions that something was wrong.

Lola Mae went to the door, I was standing behind when Leonard said Randy is laying up on Butler Hill badly hurt, and he told us we should call an Ambulance. Lola Mae called the Ambulance, and we went up to Butler Hill where Randy was seriously injured. I hope I never have to look at another sight like that, our little Grandson lay on the Highway 158, his left leg completely broke off a few inches above the ankle and badly mangled from above the knee. His left shoulder dislocated, and his left arm broken below the shoulder, and a concussion and badly bruised all over his body.

Leonard had left his house to go put some calves with the cows up at John Gray's. As he was coming toward John Gray's from BB Road and 158, he saw something laying in the road on Butler Hill. He said at first he thought someone had lost something out of a pickup truck, but as he got closer he saw it was a body, and when he got to the scene, he saw it was Randy.

He couldn't leave Randy, so he could come and notify us, so he stayed with Randy until Leroy Murray came along on his tractor.

Leonard left Leroy with Randy, then he came to our house to notify us.

Leroy and Leonard applied a tourniquet on Randy's leg. Leroy also pinched the large vessel in Randy's leg to help stop the bleeding.

The nurse said Randy had good blood pressure and pulse at the scene of the accident, but before we got him to the Doctors Hospital, he had no pulse and his heart stopped beating twice. The R.N. hit him in the chest to start his heart. He had oxygen on but lost so much blood he liked to passed away.

The Ambulance driver Bob Floata, and his wife called ahead to the Hospital, and had everything ready for Randy including fluid and Dr. Reddy.

Dorothy came to the Hospital, and the Dr.and nurses told her Randy's leg would have to be amputated which at first she did not want to do, but looked at Randy's leg and saw that it was necessary to do.

Randy was given 8 pints of blood and later during the operation was given another pint a total of 9 pints. They say that 10 pints is all you have normally.

Randy was unconscious for 24 hours and incoherent for several days after, but he began a rapid recovery being a strong boy, and the desire to want to live. 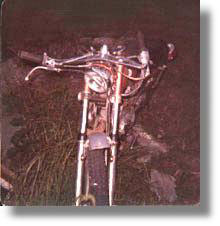 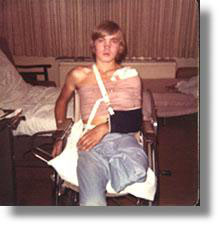 Me in wheel chair

Good to hear from you again, Randy. Itâs a heck of a story you have there. Glad youâre doing well. Take care.

Good to hear from you again. Though, I miss your bbq and grilling comments. Drop in more often. Another old timer, Brad

Brad, I'm going to. I miss you all. Are you still making Cajun triangles?

Brad, I'm going to. I miss you all. Are you still making Cajun triangles?

I am retired from triangle making.  I got old, or at least my body got old.  The elbow just could not take the hammer and anvil work that much.  Getting older sucks, eh.   Jeez, while I am not a founding BHO member, it has been fifteen years or so that I have enjoyed my BHO brothers and sisters.

I still have my leather man bag.  Did you make that for me?

So, when are you going to use the missing leg as a busking asset?

Whittle up a pirate peg, clamp a toy parrot to your shoulder, pop on a tricorn hat, and sing sea chantys on some busy corner.

Yep. The old leather pouch. Man I just got my banjo out and picked a little. It felt strange...like I was starting new. I almost couldn't remember how to make a D chord. But in a couple of minutes it was coming back and I played Foggy Mt. Break down and Your Love Is Like A Flower. Man I'm excited again. Life has gotten in the way of my banjo pickin' but I spent too much time and effort to learn that darn thing to let it just go away.

So, when are you going to use the missing leg as a busking asset?

Whittle up a pirate peg, clamp a toy parrot to your shoulder, pop on a tricorn hat, and sing sea chantys on some busy corner.

Mr. Mike!  How you doing sir?  Dang glad to hear from you.  Yeah, I got a friend who picks banjo at Key West dressed like Darth Vader.  I told him I was going to come down there and get me a pirate suit and busk with him on Mallory  Square.

Iâm new here so this is the first time Iâve read your grandpaâs story. Iâm so glad you made it and you got good care to pull you through.

Iâve been riding motorcycles since I was 15 or so. I worked as a motorcycle courier in Washington DC when I was in college. I commuted on a bike for most of my working years.

Iâve wrecked one bike and broken one bone in all that time and it was my fault â¦ or at least no other vehicle was involved.

I did have a close encounter with an older guy in a dark red Chevy Caprice a few years ago. He tried to change lanes into me, he knocked my mirror off and my saddlebag left a nice scrape down the side of his car, but I kept the bike upright and made it home.

I still ride. But I keep folks like you in mind and try to keep it safe and sane. Thanks for sharing your story.

Hey Randy nice to hear from a fellow BHO member from the good old days. Just recently Daniel aka Constitutional Peasant dropped in he was building a log cabin with his son if you recall. Maybe Hoosier Gal will say hey if sheâs able along with innepie(?) those two were a hoot. Man Iâm getting old miss the old crowd but Mike Gregory does a fine job,and Fig also, taking up the slack.

Some of your new people may not realize that my motorcycle accident happened in Misouri. In a little town along the railroad tracks of the Missouri Pacific railroad, in the foothills of the Ozarks.  My grandparents house.

I figured it was somewhere rural from Grandpa’s notes.

Are you planning anything momentous for the 50th anniversary?

A very good anniversary to have. Glad that you are still with us, Randy.

Glad yer still alive and kickin!!! Was beginning to wonder!!! Hope you and the Mrs. are doing well , and your little tunnel digger too !!!
Slammer!!!

All the best, Randy. Keep pickin that banjo!

Randy, nice to see you posting. I remember the picture you posted at Christmas time; swimming in your pool. I wish you well. Don

i had 3 moto accidents finally said I quit laid one down in the rain 35 mile an hour over the handle bars,,a dog came up out of a culver and went between my spokes didnt walk for a month a helmet saved my life all 3 times god I loved being stupid and young

Nice to hear from you again. I remember when you posted a lot about Annie the dog. I also think you posted that she was not longer with you. Do you have a new dog? I am a dog man and I have had own dogs for 45 years, and before that I always have had other's dogs to take care about.

i had 3 moto accidents finally said I quit laid one down in the rain 35 mile an hour over the handle bars,,a dog came up out of a culver and went between my spokes didnt walk for a month a helmet saved my life all 3 times god I loved being stupid and young

Yes.  My helmet really saved my life.  My mom bought me a really good helmet and insisted I wear it.

Me in wheel chair

Hope you are doing well, Randy.

Nice to hear from you again. I remember when you posted a lot about Annie the dog. I also think you posted that she was not longer with you. Do you have a new dog? I am a dog man and I have had own dogs for 45 years, and before that I always have had other's dogs to take care about.

Hello Jan.  Annie is still with us.  She is going to turn 10 in August.  I bet you were thinking about our first dog Koko.  She was 13 years old and started having severe seizures along with other health problems.  I was upset wondering if I should have her put to sleep.  I got lots of good advice and support on this group as usual.  Everybody told me I would know when it was time.  I did and that was one of the hardest days of my life.  We got little Annie the Rat Terrier to fill the empty space in our heart just a couple of weeks after Koko left us.

I always love seeing your greetings from Sweden.

'Termites in my Gourd Banjo?' 1 hr

'Whatâs the best way for me to get a long neck banjo? Buy or build?' 2 hrs