We up here in snowbilly country have always been busting with pride over our great singer-songwriters. No one more deserving for this award than Joni Mitchell, an artistic gal from the Canadian prairies. Like she says, “It’s a long way from Saskatoon.” 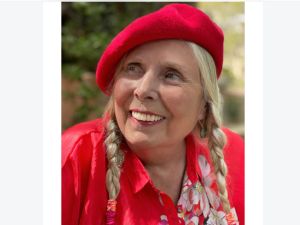 and on the Johnny Cash Show 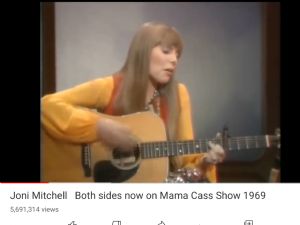 And a long way from Atlantic City, two weeks before Woodstock, where she ran off the stage in tears after three and a half songs, because the crowd, who came for rock, wasn't listening. In the third song, at the piano, she paused and said, "Ha ha. I sang that verse twice and nobody noticed." That's her, then, in the photo.

Not sure I'd give her an award when she wouldn't play my guitar at the Toronto Folklore Centre in the mid-Seventies.

I didn't even know she was there, sitting on the floor behind me, trying out guitars, when Ray Materick, who'd just tried mine, called out, "Try this one, Joni!" "What is it?" It's a L'Arrivee." "I already played a L'Arrivee." 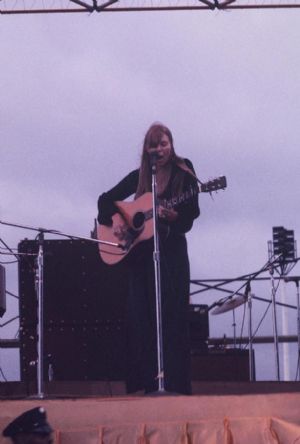 I think that she is a brilliant, highly innovative artist who went her own way and made unique music. I'm glad to see her honored.

Definitely brilliant and unique and deserving of honours (including Companion of the Order of Canada and the Governor General's Performing Arts Award for Lifetime Artistic Achievement).

I quite liked her interview with Jian Ghomeshi, where she occasionally demolished his assumptions of what went on in her life. https://www.youtube.com/watch?v=pEJuiZN3jI8

And glad that she was able to reconnect to the daughter she gave up for adoption when she was a struggling musician.

I saw a program some months ago, and I think it was David Crosby that said of Joni, âWe all were just writing songs, and Joni was doing artâ.
Iâve long considered her Blue album her masterpiece. I saw her perform it solo in Detroit shortly after it was released. The music was so beautiful and intimate, it was a great evening.
And Paul, I hadnât heard that she had met with her daughter that she gave up for adoption before. Thatâs good, I hope it went well. She shared part of that with us when she wrote Little Green.
Iâm glad her work is being fondly remembered now.