I just posted an ad for an Gibson tenor banjo that I've acquired. I'm not especially familiar with these and only know that these is an early one. Could somebody please inform me as to what year and model it is (I'm guessing TB-1). 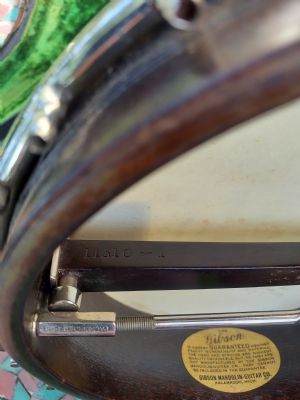 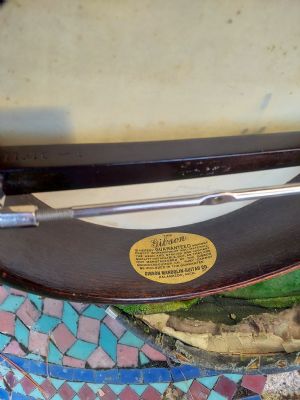 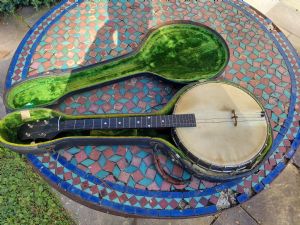 I have a very similar instrument: 24 hooks and nuts secured to the rim by a tube flange, same peg head, ebony nut, and a ~21" scale with the neck joining the rim at the 17th fret. Mine has only 20 frets instead of 24, a slightly different tailpiece, a hollow "Kraske" rim, and a trap door resonator secured to the back of the rim with one screw at 7 o'clock [does yours have a screw hole there?] and a hook that wraps around the lower end of the coordinator rod.  It also has a factory original ivoroid "finger rest" and a similar Grover "Non-tip"  bridge.  Mine has a 1923 factory order number, and Spann's Guide confirms yours as a 1922.

The reference books do not agree on the model designations for these early plainer model Gibsons, and the instruments themselves sometimes varied in their exact specifications. The TB-1 and the TB-Jr., which were the models below mine, generally had shoes screwed into the rim to secure the hooks. The TB-1 had a brown finish and [usually??] a trap door resonator, and the Jr. was usually black and had no resonator.

'Vintage National Circle 8 Finger Picks before they starting putting USA on them.' 15 min