When Janet asked if I could do a TOTW I looked through the list to see what songs had been done before and was surprised to see that "Tom Dooley" wasn't one of them... so having been a favorite song of mine since I heard Doc Watson play it on his 1964 Vanguard album, here's a version of Tom Dooley based on Doc's playing.

The story of Tom Dooley (Tom Dula) is, like John Henry, one of the most enduring in American music. Based on the 1866 murder of Laura Foster in Wilkes County NC by Tom Dula, a multiple wounded Civil War veteran, the song was a pop hit for the Kingston Trio in 1958.  As to the biographical information about the crime, Wikipedia gives a good jumping off point for further study... as well as the song.   The tale is still being discussed, as witnesed by this recent podcast from a little over a year ago.  Many now believe that Dula took the blame for the murder to protect Anne Melton who actually killed Laura in a fit of jealous rage.  The story is a tragic tale full of love, jealousy, intrigue, legend, and some bit of mystery.

So many versions have been recorded or refereced in song (including Bob Dylan in 2020's "Murder Most Foul"), but it should be noted that Grayson & Whitteir first recorded the song in 1929 (released in 1930), and the "Sherriff Grayson" (Colonel James Grayson) mentioned in the lyrics was an uncle of famed fiddler G.B. Grayson (of Grayson & Whittier).

Folklorist Frank Warner recorded the amazing Frank Proffitt playing the song in his great North Carolina 2 finger up-picking style in 1940, and broiught the song to NYC, where it percolated through folk circles eventually emerging as a #1 pop hit recorded by the Kingston Trio in 1958.

Doc Watson's (always) great version was recorded on his 1964 self titled Vanguard LP, and the different nature of the tune caught my ear.  Unlike the mounrful ballad of previously recorded versions, Doc's was rollicking and rolling... and since I'm kind of that guy, that's the version I've always played.  It fits well into C Modal (gCGCD) and I'm tuned down a step or so in my recording.  Someone told me there is video of Doc playing this on the banjo in his "still hand" style, but I've unfortunately never run across it.  Doc told me that he learned the melody of the song from his Grandmother, so his source was just a generation or two removed from the actual crime the song is based on.

I rap it here, but also play a two finger thumb lead version every now and them... I like the sound of this tune played downstroke rather than picked... YMMV.

Anyway, here's "Tom Dooley" based on the playing of the great Doc Watson.  Hope you enjoy and have a great 4th of July weekend! 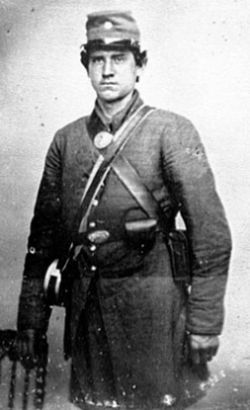 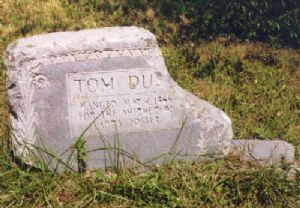 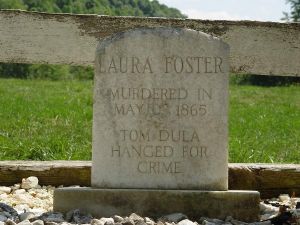 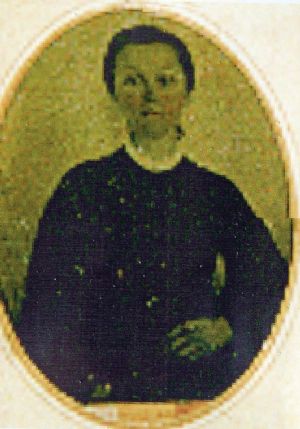 I'm glad to discovered this surprising omission, R. G. In the BBC video, "Doc Watson - Three Days with Doc," Doc and his family repeat the story that Laura Foster may have actually been killed by Anne Melton. Merle plays the banjo behind Doc's singing and guitar at the 22 minute mark. They play the tune in G.:

Here's some simple tab that tries to capture the gist of Merle's playing.

, but I had planned to focus on the Grayson and Whitter version from 1929 1920 (https://www.youtube.com/watch?v=k9NHKINSKFk). It seems to be the first recorded version. Also, it was the uncle of G.B. Grayson that was involved in the capture of Tom Dula, and also is mention in the lyrics.

Thanks for posting that David, I'd never seen that video before... great stuff!

Sorry to have jumped the gun Jan Olov, but go ahead and post the Grayson & Whittier version in August... as I (and you) mentioned, it was the first recorded version and also as I mentioned, Colonel James Grayson (1833â1901), was indeed G.B. Grayson's uncle, a Union Army officer who helped organize an anti-Confederate uprising in Carter County, Tennessee at the start of the Civil War in addition to being involved in the capture of Tom Dula.

Look forward to your version in August!

Back when I was 10-12, and living in the USA, we visited Sturbridge Village in Massachusetts and, coincidentally, Frank Proffitt presented a short outdoor concert that day. His 'tour' was coordinated by Frank Warner, of the YMCA in NYC. This was my introduction to banjo. I watched and later talked with Frank Proffitt for some time. I wanted to buy his handmade banjo and he was willing but my father veteod the purchase. Frank Proffitt and his family are usually credited with keeping/transmitting that song/story, though I doubt he made the money the Kingston Trio did with it. Decades later, I loved Doc Watson's version.

Back when I was 10-12, and living in the USA, we visited Sturbridge Village in Massachusetts and, coincidentally, Frank Proffitt presented a short outdoor concert that day. His 'tour' was coordinated by Frank Warner, of the YMCA in NYC. This was my introduction to banjo. I watched and later talked with Frank Proffitt for some time. I wanted to buy his handmade banjo and he was willing but my father veteod the purchase. Frank Proffitt and his family are usually credited with keeping/transmitting that song/story, though I doubt he made the money the Kingston Trio did with it. Decades later, I loved Doc Watson's version.

What a great story!  Too bad your dad didn't let you get that banjo!

Frank Proffitt did eventually collect royalties from the Kingston Trio since they based their version on the singing of Frank Warner who learned the arrangement from Proffitt.

Tom Dooley was the first song I learned on guitar as a youngster.  One of the best CD sets I now have is with Doc Watson and David Holt, called Legacy (highly recommended).  I was first in line to shake Doc's hand when I last saw them in concert. Doc and David signed the CD box.

In the liner notes for Track 6 of CD 2 there's a photo of Doc at Tom Dula’s grave.  Sometimes you see "Dula," and other times "Dooley."

David states, “Tom Dooley is a song written shortly after the notorious murder in 1866.  It’s not just a folksong to Doc and Rosa Lee, but part of their family history.  They each have great grandparents who knew the real Tom Dula, Laura Foster and Annie Melton.  Doc’s great grandmother was at Annie Melton’s bedside as she lay dying after having been hurt in an ox car accident.  I talked to Rosa Lee about her side of the family story of Tom Dula: ‘Daddy’s great grandmother said Laura Foster come by her house when she started to meet Tom Dooley the morning she disappeared.  Laura said she was a goin’ to meet Tom and they was a goin’ to go get married.’  Based on the court records, this is the last time anyone saw Laura Foster alive.  This was a crucial piece of evidence in the trial, connecting Tom to Laura’s disappearance.”

David also interviewed Doc for the CD, one of several interviews, and this is transcribed from Track 6, CD 2.  (On track 7 they play the song in the style RG plays for our TOTW.)

David:  When the Kingston Trio came out with Tom Dooley in, I guess it was the late 50’s, you were playing with a band at that point, right?

What was the name of the band?

And the Kingston Trio at that time put out 'Hang Down Your Head Tom Dooley'.  Can you tell us the family story?

Well, first I learned the melody that I use and some of the lyrics from my grandmother.  Her folks knew, her mother and dad knew, Tom Dooley’s family. And she told me a lot that I know about the happening.  And the Kingstons, in their narrative at the beginning, talk about the eternal triangle, but actually in the story grandmother told, there were four people involved.  There was two guys and two gals and Tom Dooley was involved with both girls and so was Mr. Greyson, mentioned in Tom Dooley’s song.  And it was generally believed that Tom Dooley swore that he had never harmed a hair on Laura’s head, that Annie Melton stabbed the girl and Tom had to cover up the crime.  And Annie Melton was in jail for a while.  She made her brags that they’d never put a rope around her pretty white neck.

Now your great-grandmother was actually there when she was dying.

Yes, she was and all the women claimed they could hear something in the room like hot stones being thrown into real cold water and like the flames of hell roaring, and things like that.  It was a scary time.  And Annie told the women that there was something that she knew.  She’d never get well, that she needed to tell them, that she was afraid to tell them, that she might get well.  She didn’t tell them, but before she died, she called her husband into the room and told him whatever it was.  He never (rested?) either, but he almost lost his mind.

And this version of the song actually comes down through your great-grandmother.

Yes, it does.  The melody and most of the lyrics that I use, or some of them anyhow. 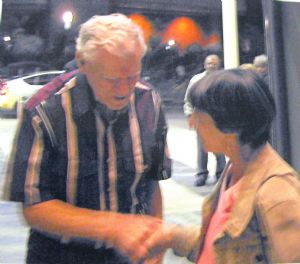 Thanks for posting all that Janet! It's very common in that area of NC to pronounce "a" as "y"... that's what it's "Duly" and Laury" (phonetically) instead of Dula & Laura...

i know that Frank Profitt did get royalties from the Kingston Trio version of the song, but Doc told me, and I always believed, that his family was very intimately acquainted with folks from the actual event... this interview seems to clarify that... very interesting indeed.

Once the local School Boards starting hiring Teaching College graduates the language changed within a single generation. My grandmother was "Marthy" but I have two cousins who are "Martha".