Good bright and late morning from cool Kingston, Ontario. It's only 9C now, but should go up to 22C under sunny skies. I'm off to Belleville for my second vaccine shot. Painting (not ours): Manly MacDonald, "The Mill Run", oil on canvasboard. 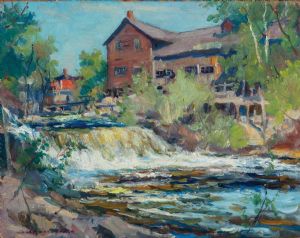 Have a wonderful Wednesday everyone

Good Morning from cool, clear and sunny Northeast Wisconsin. Forecasting possible rain later today but we are 6" short since the beginning of the year so in drought conditions. River seems down to normal August level.

Good morning from NE Ohio. Rather cool this am but the sun is coming out and the birds are chirping.
Thanks for the pic, Paul.

Gâmorninâ, all. In the 70âs today, rain later this afternoon. Be well, everybody.

Good afternoon on this beautiful cool day here in upstate NY .
A couple of pics of our huge mulberry tree now loaded w/ ripening berries which will eventually turn black & cover the ground  .
All of the critters love them including an occasional black bear . For those not familiar w/ mulberries they taste like black berries but sweeter . Good afternoon.
All my tasks are really cutting into my nap time!

I can see suppertime rain on the radar mapping for this afternoon. Maybe tomorrow, too.
So be it. By Friday, 7-10 days of 30C+ which is 5C too warm for me. More wood carving in my downstairs shop than usual.

Good afternoon.
All my tasks are really cutting into my nap time!

(Just FYI, about "Poor. Poor. Pitiful Me: That's a Warren Zevon song, which was on his debut album in '76. Linda Ronstadt put out her version the next year.Twenty years after Zevon wrote and recorded it, Terri Clark sent it high on the Country Music charts. I don't think that Shania ever recorded it, although she did record a song called "Poor Me".)

Enjoy the completion of your tasks - and your naps.

OK, Paul.
All I remember is a gal in a big cowboy hat, long dark hair, on the TV, once.