Hi Everyone, I have an (purchased as) American vintage Tenor Banjo that I would like to find out more about.
It has a gold speckle finish facing to the headstock bearing the legend "De Graff Special", and the body ring and resonator feature matching gold speckle ring inlays. The tuners are of an interesting design which I have never seen before,
I wanted to attach some photos, but can't seem to add them to the message, as Copy/Paste does not seem to work. Sorry.
Please can anyone help identify this one? Thanks 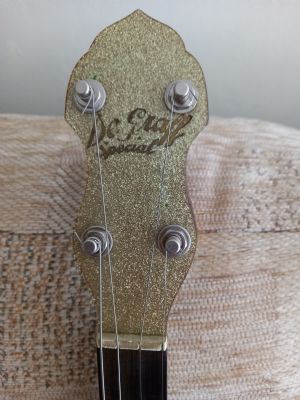 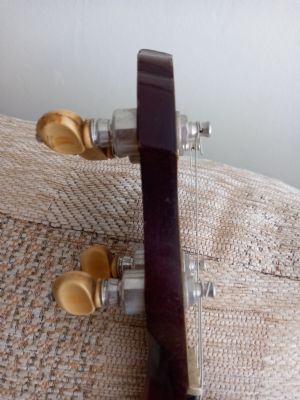 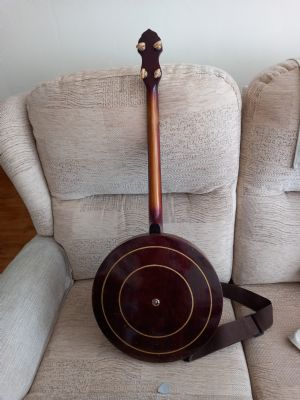 Hi Davy, I hope I’m not teaching grandmother to suck eggs but if you look at the bottom of this page there is a facility to upload your photos and you can add them to your post, if not, the experts will at least be able to see them on your profile page.

Has this banjo beaten the Hangout experts? If so, thatâll be a first wonât it?

Good photos of a nice looking banjo that I never have heard of.

A few more pictures would be helpful. Please remove the resonator an show the inside with a close-up of the neck attachemt hardware. The side of the banjo and a shot of the tailpiece would also help.

I suspect that "DeGraff" was a wholesale distributer or music store, and that the banjo was made by some other company. More pictures might help identify the actual maker.

Hallo Edward,
Here are some more pix of the banjo in question. Hope they reach you.
Regards, Davybee 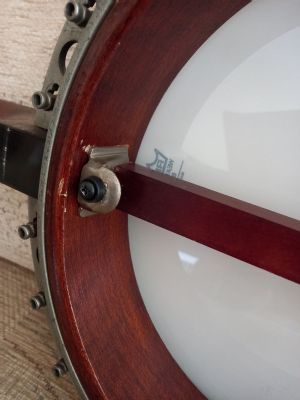 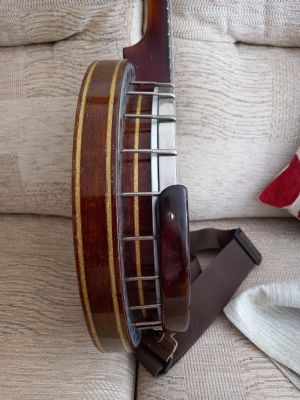 I believe this is an Oscar Schmidt creation - one of their nicer ones.

I know what that banjo is now that we have some ideal photos.
OldFrets has got it.
An interesting story.
But I'm making dinner right now.
Will post more soon. 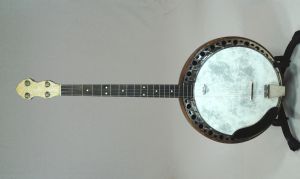 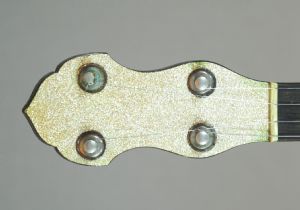 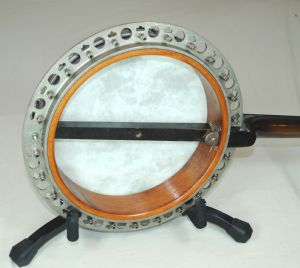 I agree; it was made by Oscar Schmidt.

Oscar Schmidt yes and no.
Interesting story behind your banjo.
In 1931 NYC banjo manufacturer, Wm L. Lange, introduced his lower priced line of Lange-Craft banjos apparently to compete in the depression years and the in the era of the decline of the tenor banjo. Lange's Lange-Craft rim was a marked departure from his Orpheum and Paramount products. The Lange-Craft rim was comprised of a heavy metal flange with sound holes and holes to accommodate the bracket hooks. The rim did not have bracket shoes and the bracket hooks tightened vs the bottom of the flange. The flange encircled a wood rim. All of this like your banjo drum. Interestingly and somewhat puzzling is that Lange sold these Lange-Craft rims to existing banjo makers like Gretsch and Oscar Schmidt both of which were in Lange's NYC "neighborhood". Gretsch in Brooklyn. Oscar Schmidt in Jersey City. Anyway, Lange's gold sparkle Lange-Craft rims and resonators with the gold sparkle circles went to Gretsch and Oscar Schmidt and those two companies (and maybe some others) made banjo necks and and assembled them to sell to private label customers like Leo Master, Justice and now we have De Graff. Look at your flange back at the tailpiece end on top or bottom and I would be surprised if you don't find Lange's patent number 1550826 stamped there. So, you have a banjo assembled in the Oscar Schmidt factory with an Oscar Schmidt neck and presumably OS hardware upon a Lange pot with resonator. I once bought an Oscar Schmidt goldie like yours that was a beater so I took it apart and the photos of the rim parts is attached. I also own nice OS and Gretsch goldies because I found the tale of two factories one banjo to be interesting. I think our banjos were made sometime between 1931 and 1935. 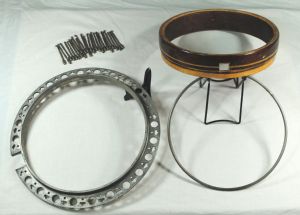 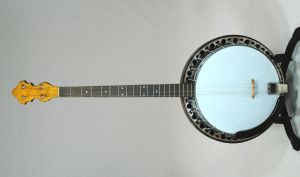 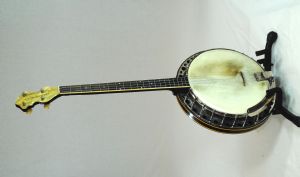 Hi All, Thanks to all of you who managed to identify my banjo. That's a great story George, - It's great to know the history and at last the identity of the maker. It baffled my banjo playing friends here in UK.

Interesting tailpiece appears to be a Presto variant but Iâve never seen one before.