Hi!
Years ago I was given a banjo by a very dear friend who ran our local music store. It cannot be played or repaired. It means so much to me though, and I want to hang it horizontally over a door way. (I call it the Jimmy Brown Special)
What would be the best way to hang it? Iâm only finding vertical wall hangers when I search online. 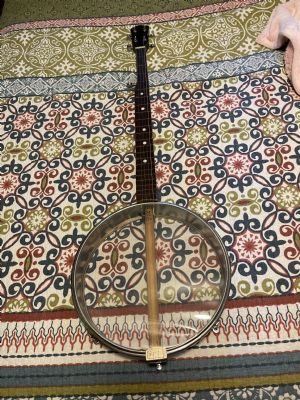 What is wrong with it that it can't be repaired?

Anything can be repaired. It just depends on how much you want to do it and how much time/money you want to invest. It looks to be in decent shape and might be a fairly simple restoration to 'playable'. Even easier to bring it up to "show" condition (not playable). A new head, a bridge and some strings (no need to get it in tune, just put them on tight enough to hold the bridge in place).

It doesn't appear to have but one bracket...but I've seen banjos on display in restaurants where a modern head was glued in place with hot-glue. It makes it a marginally better display (and is actually pretty easy to remove if you wanted to have it restored later). I purchased a vintage banjo that was a display and it had a round piece of plywood for a head (painted white). Took me about 30 minutes to remove and install a new head, good as new!

Hanging it horizontally might require a special set of hooks or pegs. I would look at some of the more common rifle wall-mounts. Often these are two separate hooks/pegs that can be screwed into the wall, one for the dowelstick (the rod running thru the round part) and one for the neck close to the tuning pegs.

Another solution would be to simply add some picture frame hooks and loop a string/wire around the rim of the banjo (and then another at the end of the neck...or even tied to one of the tuners. Provide a loop to work with the picture hooks, voila!

I'd simply tie a string at the headstock and tailpiece and hang it on a nail. Nice rustic look.

There are wooden pegs which are made for hanging guns on the wall. A set of those should work just fine.

I see no reason this banjo can't be repaired. I've fixed way worse. I doubt that it would be all that costly to get it playable.

You might enjoy it more if you learned to play a few simple tunes on it. It seems a waste to hang it on a wall where nobody can enjoy what it sounds like.

If you post your general location, you may find a qualified person to put this in shape.

I would love for it to be playable. But I took it to the music store and they said it couldnât be tuned. Iâm not even sure why, because banjo isnât my forte. I would love to learn! Are there any good sources for fixing it myself? Iâve fixed an upright bass, rest sound posts, and a handful of other repairs to stringed instruments. So I would be willing to learn, if I could find someone to get me started. Iâm in Albemarle NC.