Hi folks, I'm new in this group. I was given, or rather willed, this banjo by an old friend who bought it at a pawn shop in LA in 1952. I have others and never got around to really trying to play this till recently, when I discovered something very odd (to me anyway). The fifth string starts on the 6th fret, not the 5th fret as is standard. Why was it built this way and how is that string supposed to be tuned? See photos. Thanks for any thoughts! 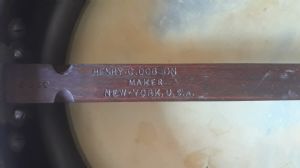 Dobson stamp on back 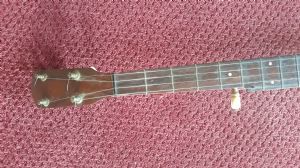 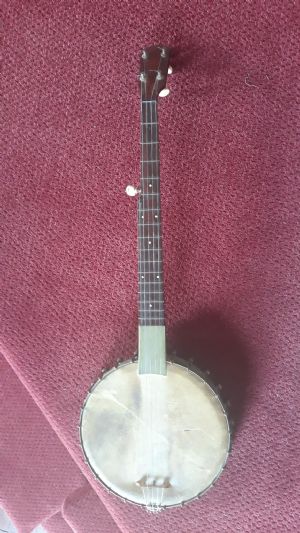 H.C. Dobson’s are known for having the 5th string peg at the 6th fret. Back then, (prior to the mid 1880s or so) the 5th peg might be higher up the neck.
I’d recommend Acquilla Nylgut strings, and you might consider tuning it lower than a modern banjo, to put less stress on the neck. I tend to tune dADF#A, which is just G tuning but lower.
Looks like a nice banjo!

These are pretty good banjos, so well worth putting it in playing condition. At this time of banjo development, the position of the bridge was not settled among manufacturers. Some went closer to the rim, some went further towards the center. I wouldn't worry about it, just set it to match the scale length.

Prior to the 1980s, fretting the 5th string was reserved for "banjo tricks". When this banjo was made, the 5th string was never intended to be fretted, so placement was up to the designer. It is obviously convenient to have a 5th string using the same dia/gauge as the 1st string, so having it at the 6th fret means just a half-step tuning up or down to get A or G.

I had my Ashborn built with the fifth string at the 7th fret, works fine there and gives it that 'early banjo' look.

AFAIK, when this was built, most of the books showed eAEG#B tuning...but that was just for notational sake (deep dive there, lots of crazy history). Most players actually tuned gCGBD. The Briggs tuning of dADF#A was only used in the Briggs (1855) book but from then on, eAEG#B was the standard notational tuning until 1907 (actual pitch was still gCGBD).

So, nylon strings and it will be happy with any tuning between Briggs and modern gDGBD. I do like the Briggs tuning (dADF#A) but you may want to use a heavier set of strings as they get a bit floppy down there.

Nope. People didn't typically use the 5th string for anything but an open note until the melodic style showed up in the 70s...and not in a tutor until late in that decade. I pushed it to the 80s because it still was unusual.

Nope. People didn't typically use the 5th string for anything but an open note until the melodic style showed up in the 70s...and not in a tutor until late in that decade. I pushed it to the 80s because it still was unusual.

While not representative of common banjoists, there is enough evidence to support that people did stop notes on the 5th.

A couple of examples off the top of my head are...

It is interesting to note that at a certain point SSS moved the 5th string nut inline with the 5th fret on banjos he built (as mentioned in this work).  I do not know the year that happened.

In the interview that Vess Ossman gave during his trip to England he said "I have one habit which is in direct violation with conventional tenets.  I Make notes on the fifth string.  I mean to say, I play A B C above the clef and higher notes on the high G string.  I am also addicted to grace notes and appoggiatura, and for these, where can, I like to use the fifth string."

It is important to note that he mentions it is "in direct violation with conventional tenets".

In my experience, I have found that in noted scores the use of a stopped 5th string is often reserved for grace notes (like Vess stated) or special effects (like Marc wrote).  Using the stopped 5th for grace notes is uncommon in scores but not exactly rare, particularly in British compositions.

With that said, there must have been a reason that Fred Van Eps took the time to carve out the 5th nut on banjos he built to match the 5th fret.  Alfred Weaver set his 5th nuts inline with the 5th fret and Clifford Essex did the very same on their banjos, a detail that is not the cheapest method of manufacturing.

Another example of the stopped 5th being used is in the unfortunately titled "(Racial slur that starts with N redacted) in a Fit" composed by Tommy Glynn.  While the original published versions by Gatcomb and Clifford Essex use snaps and slurs, Zarh Bickford wrote an article describing using the 5th string to get a cleaner tone.  It is likely that Vess Ossman is doing this in his recording of the piece.

While I agree that it was not typical, it was done enough to influence banjo design on both sides of the pond.

I know I am a broken record on this, but published music holds the answers to many questions about banjo design as it was the music played that directly influenced design.  This is likely the most neglected aspect of banjo history and is mostly ignored by collectors and historians. 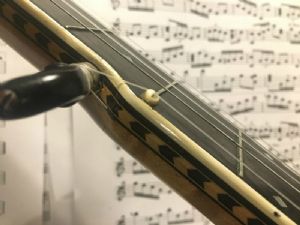 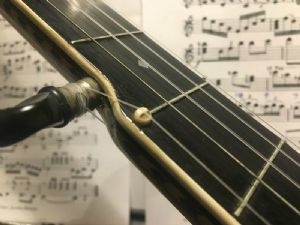 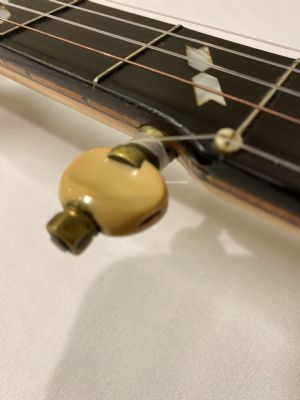 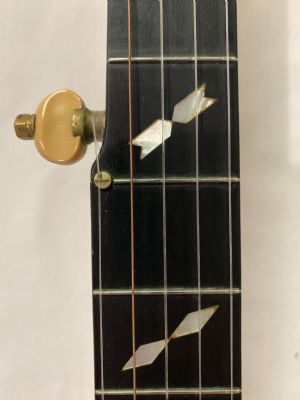 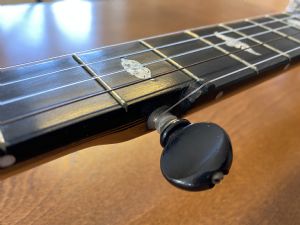 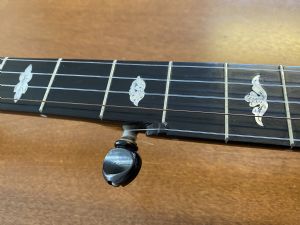 Yah, I was being as generic as I could Joel, avoiding an elaborate post from my phone. I have trouble remembering where all my examples are anyway..and I knew if you wanted, you would provide them.

I totally agree, the information is there and one can pretty easily infer how it affected the design of the banjo. Having the 5th at the 5th and in parallel with the 1st seems like "Captain Obvious" but at the time, it took some development to get there. I feel the same way with tuning the bass to D, it gets you into a direct parallel with the 1st so that pinching those octaves is just too easy.

Growing up with the Melodic style of the 70s and 80s, it took me a long time to realize that the Classic Era basically eschewed noting the 5th. I was a violator (when necessary. Still am). However, I think the only piece I regularly played in violation was Morley's "Rose Leaves Gavotte". Somebody on the Classic banjo site at the time told me I shouldn't do the grace notes via the 5th string...but I got much better tone and to me, they were easier to do.

I also use snaps and slurs a lot more than what was commonly notated. Sometimes I think there was a hidden "common sense" that was prevalent in the old sheet music as I run across un-marked snaps to open strings a lot. I used to attempt these as notated (no snap/slur) but the usage is so obvious that I just do what is comfortable for me...which is the way it should be.

The intro to Morley's Banjo Frolic clearly uses the 5th for the grace notes.

Yeah, snaps and slurs. I think recording and radio changed playing styles. Bickford went on at length about avoiding snaps and slurs as they were not as clear and would not be picked up as well. This is reflected in later publications verses earlier (which were filled with them including open string snaps). It could be generational as well.

Eno's Cupids Arrow is a good example of how changing from snaps and slurs to position playing takes the musical description of fluttering wings and turns it into an in-your-face virtuoso shred fest. Totally kills the mood of the piece.

AFA notes on the 5th, they don't cost any extra (as long as the 5th nut is in line with the fret) so I say use 'em all you want.

Now, none of this has anything to do with the OP, but... you know.

I don't know much about Henry Dobson banjos as they are mostly outside of my radar. But this configuration was clearly by design as even woodcuts show it.

Perhaps someone who has studied Henry's body of work and read all he wrote will have the answer for us?