FF - Smoking Through The Stall - is it done yet?

Absolutely gutted for my neighbour. Last night we had been chatting and he was telling me he was smoking a pork butt on his Bradley smoker today. I noticed a lot of smoke blowing from his house so went to investigate. He wasn’t home but due to the amount of smoke I let myself in - bloody pleased I did too. I wouldn’t normally take pictures before acting, but I thought if I’m going to kill his smoker I’d better record why - poor bloke! 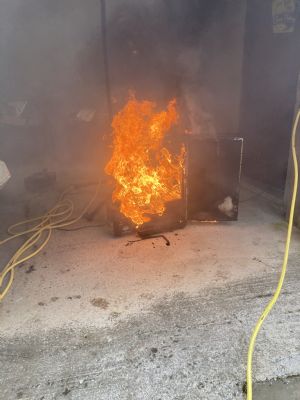 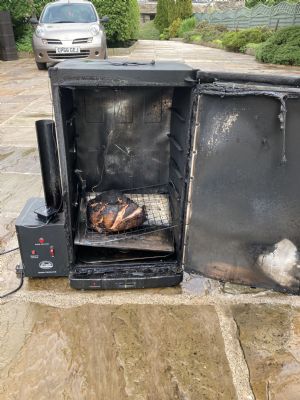 Lucky for him you were there.

Years ago..I had a Toyota truck...
One mormin.. me next door neighbour came over to explain...
That in the middle of the night..
The horn in me truck..
Just started blowing..non stop..

Bleary eyed n half asleep.. the only remahdy he could think of ...
Was to rip the wires out of the horn..

Personaly...I can completely understand his reaction n choice of killin that horn..

WOW I can't believe he left home while it was cooking! I made the mistake of jumping on the mower while I was slow cooking a brisket once and was behind the creek for 20 minutes. Was a huge mistake some grease caught fire and instead of 225 degrees it had jumped over 500. Most of it was still edible, but not at all what I was going for. Will never do that again!

Al, i did think that - but it was in an open fronted garage - it was getting the hose!!

Years ago..I had a Toyota truck...
One mormin.. me next door neighbour came over to explain...
That in the middle of the night..
The horn in me truck..
Just started blowing..non stop..

Bleary eyed n half asleep.. the only remahdy he could think of ...
Was to rip the wires out of the horn..

Personaly...I can completely understand his reaction n choice of killin that horn..

No fuse?  I too have lived this nightmare.  I got mad in traffic one time many years ago and punched my horn.  So it got stuck blowing and everyone else who was stuck of course was looking at me like the idiot I had been.  But I pulled the fuse as fast as I could got it home and thought I had it fixed.  But in the middle of the night the temperature dropped below minus 10 and for some reason the cold temp caused that horn to blow.  That was 27 years ago I was in an apartment so all my neighbors were hearing it too.

Ended up having a $300 repair bill.  Never did that again either!

Lets just hope I don't bugger my own smoke up tomorrow Terry!

Many years ago my neighbor was welding in his garage. Burned the house down. Access to the house was over a bridge that was not substantial enough to support a fire truck. His second wife and her three daughters and his two daughters from his previous message returned from shopping to a mound of ashes. I always weld, braze and solder outside.

Yeah, I would still eat that too.

Good on you, Mr. Spaniel!

Closest I could even TRY to match that story:
Left a candle in a wooden candlestick overnight.
Had no idea that once the candle burned down to the stick, the stick itself would feed the flame.
That was back in the days before smoke alarms.

Only burned an inch or so of the candlestick, but that was enough to teach me what never to do again.

That was the SAME candle over which I had held a thumb pick, to heat and bend it.
One candle, two unforgettable lessons.

That certainly put a crust, a bark, on the butt!!!!!!
I've had chickens get too hot for too long = quite crispy on the outside
and heavenly on the inside.

I do agree that it's a must to never turn your back on a 3+ hr BBQ with smoke wood.

I use a very convenient gasser that sits just outside my front door. I'll take a wood carving project out there and sit in the shade under my big spruce trees on nice days, just to keep an eye on the proceedings. I try to run maybe 285F or so. Couple of fires have gone over 375F but with water, easy to bring it down quickly. Negligible effect on the food.

You almost need a drip pan with a drain pipe. All that oil getting near the burner is bad. We use one of those aluminum turkey roasting pans to keep the fat off the coals on the Primo.

I haven't tried an electric smoker but I'd like to.

Back in the day I've seen a few fires from people falling asleep with cigarettes. Nobody was hurt but i lived in a building where a girl fell asleep in bed & the mattress & box spring had a hole burned straight through.

We hauled them outside & doused them out with a lot of water. They lit back up overnight but didn't cause any damage because we put them on pavement against a solid brick wall.

I saw a house where a guy fell asleep with a smoke & lit a couch on fire. They dragged it out on the porch & poured a ton of water on it & all went back to bed. They woke up to the fire department as their alarm clock!

I had a book from our school book club called Tombstone Humour.

Don't smoke in bed. The ashes under the bed may be your own.

I donât believe it! I just went to put these bad boys Iâm my electrici smoker and the element popped ! Arghh! Normally Iâd call on my neighbour (itâs probably the only other smoker in a 10 mile radius) and borrow his but thatâs not going to happen now !!! Ok, oven it is! 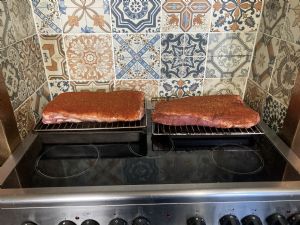 You could become the electric smoker n accessory salesman...
King of the Kill.....
;0)

You could become the electric smoker n accessory salesman...
King of the Kill.....
;0)

Wish I was mate.  just taken the back off and the spade connectors and the element electrodes are corroded through.  I'm now trying to see of I can locate a suitable element in the UK which is proving about as easy as knitting fog!

Oh, it just gets better Bob.   Both couples who were coming over have canceled today.  I've got $100 of meat cooking and $150 of booze chilling..... Man - Terry, I wish you'd booked that ticket now!

Fortunately I have good friends who don't mind being my second choice so hopefully we'll have a great afternoon none the less.

Just when ya think it canât get any better eh !!! I feel yer pain buddy , and I guess your neighbor didnât get the memo about â low and slowâ .
Slammer!!!