Hey everybody, been a long time since I really posted on here. Took a good long break and got my mind a break for a while. Im back to pickin a bit and recently bought me a Rb250 bowtie. I have been looking around on the internet for some info on it. Its was originally thought to be a 61 bowtie by the seller but mine has the thin rim with the overhanging ring. So therefore, I am thinking its a little newer than 61. The banjo is in great condition and seems to be all original except someone changed out the 5th string tuner. I would like to find out what the year is just for my own knowledge. The serial number on mine is 010740 no dashes or anything.

1961â71 were the years that Gibson reused serial numbers up to three times. With the serial number and pictures, the detectives here can help you date the instrument. Include the back of the headstock â very important.

Is it chrome vs nickel plated? That may help date it.

And I would bet it is chrome not nickel plating

yes it has the thin rim and it appears to be chrome, at least I can definitely say the ring is chrome plated. And the banjo is extra heavy I might add. Ive had several banjos but this one is one of the heaviest I've had

Noticed your location and if that's the Bowtie I saw on Facebook the other day, you got it for a great price!
I'd like to see some pictures and maybe a few recordings.

yes it has the thin rim and it appears to be chrome, at least I can definitely say the ring is chrome plated. And the banjo is extra heavy I might add. Ive had several banjos but this one is one of the heaviest I've had

Again, pictures including the back of the headstock will help us date it accurately.

Gibson switched over to chrome across the board in 1967. 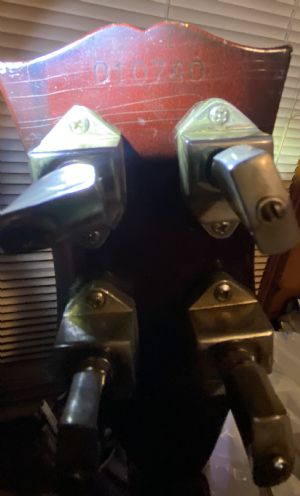 Hmmm, interesting. The extra bowtie "beyond" the MASTERTONE block in the fingerboard looks like a pre-1961 neck! That would be an odd serial # for a pre-1961.

I donât guess they would have used the thin rim in the pre 61 models. I wonder why the neck looks pre 61

This one is a head scratcher.

I wonder what year they first had metal buttons. Cuz I forgot, if I ever knew, although definitely by early 60s.

correct but in the banjo philes description it plainly says "neck only"  ,,so i don't know unless its and 67 neck with a donor pot

My serial number is 017040. Itâs not listed on banjophiles what does this mean

My serial number is 017040. It’s not listed on banjophiles what does this mean

Basically, it means that nobody reported this banjo. Banjophiles is not based on Gibson records like the Spann's book, just owners like you who sent their FON/Serial numbers to the site.

I can tell you how Banjophiles works. Banjos sold thru ebay and other ways known to banjophiles. Are taken as Facts. I have had 3 banjos on that website, Not 1 banjo is dated correct. I even notified them of the mistake, was informed they would be corrected. Nothing happened. I pay little attention to their information. Not running the site down,,Just stating FACTS,,,Your better off checking with people who may know better. I Am (NOT) one of those people to contact,,,

Does anyone know who I might find more info from?

I agree that banjophiles bowtie data is not gospel. In general it lines up roughly with what we think we know about these instruments, but is riddled with errors, misinterpretations and missing data. There are plenty of people who thought or wanted to believe they had an older banjo than what they really had, based on the vague recollection of the original (or second or third) owner's surviving family members or just hearsay or just made up in some cases. Banjophiles data also has gone long stretches of time without substantial updates. I'm not sure there's any better resource, and there isn't a lot of historical interest in documenting this era of Gibson, at least for banjos, so it is what we have. I don't know how much reliable data even Gibson has about this era. Much of it (like the true source/composition of most of the tone rings) remains largely unknown or misunderstood, although various assertions have been made. Outside of banjophiles there are lots of anecdotal stories scattered over the years that don't completely jive. Somebody somewhere claiming to have bought their flathead bowtie in 1952, that type of thing. Maybe that happened, twice, but not hundreds of times. RB-250 bowties in archtop configuration became a catalog item only in about 1954 by most accounts. The vast majority of bowties coming up for sale in recent years are from mid-late-60s, although I've seen a few 50s archtops for sale lately, which is unusual.

Most original or nearly-original RB-250 bowties show some distinctive tendencies depending on which era they were built in. I'm going to say there are basically three general eras of RB-250 bowtie construction: 1950s, 1959-1964, and 1965-1969. 1950s are mostly 4-hole archtops with brown full thickness rims, maybe a few flatheads by very late 50s, 21st fret Mastertone block, white buttons, nickel hardware, etc. Early 60s production numbers increase and flatheads become more common, with a mix of 19 and 20 hole rings, Mastertone block moved to 22nd fret by early 60s, metal buttons, and appearance of some thin rims by maybe 63 or so, some banjos in chrome, some still in nickel, mostly still rosewood fingerboards, various windowed tailpieces. By the mid-late 60s the quality seems to decline just slightly, thin rims almost exclusively, few archtops, mostly chrome hardware, flatheads - possibly different ring source(s), ebony fingerboards become pretty common. In 69 I think there is a transition with a few models sporting bowtie inlays and fiddle head before the "new" RB-250s of the 1970s are fully realized. In reality the early and later 60s banjos are not terribly different, but the earlier ones through maybe 1964 just seem a bit better or more desirable and often command a slight premium. Just some very general guidelines and not hard rules, and I'm no expert anyway.

Your banjo, from what I can tell, breaks some of the "rules" so I really don't know what to tell you. If it is in fact an actual original complete banjo, I'd probably go with it being mid-late-60s. 67 as others have said sounds like as good a number as any. With Gibson anything is possible.

Regardless, these are cool old banjos for those who appreciate them. They got a little trendy in recent years, although that may have cooled. Or not, I dunno, don't pay as much attention any more. But what you have is a quality Kalamazoo-built Gibson Mastertone banjo with good hardware and a good ring, real unobtainable Brazilian rosewood, Gibson fit and finish and classy mid-century styling. And it won't look like every other banjo (Gibson or not), but is still pretty recognizable. The main thing is if it sounds good to you and you enjoy it. I love my 63 bowtie, and I'm about 80% confident that it actually is a 63. And who is to say otherwise?