In a recent post Michael Westfall stated that "around 1930 Page issued a tuner with a stamped metal gear case" which he'd seen on some Paramount Junior banjos.
The first Paramount Junior I've encountered was in the 1930 Paramount catalog.
Attached are 3 photos of the pegs on 3 different Paramount Juniors.
They look like the same pegs to me.
You can't see if there is an "E" stamped on the housing though.
Are these pegs the ones known as the Paramount E tuners?
If so, when were they first introduced?
1930? 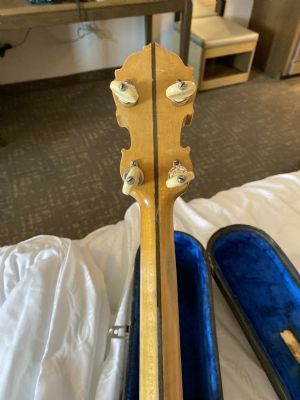 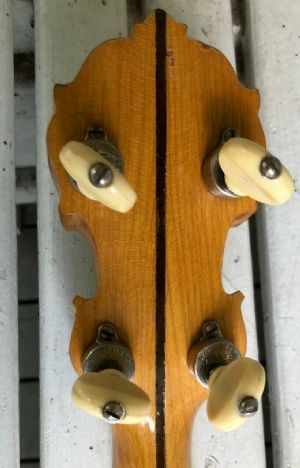 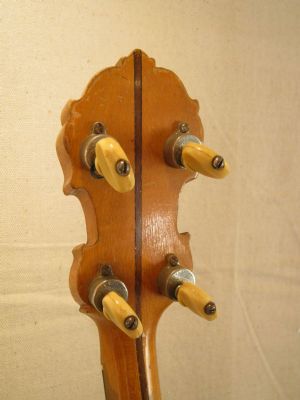 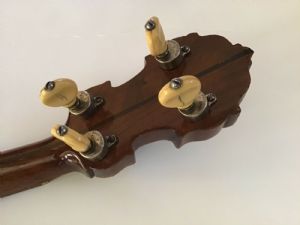 I don't know a damn thing about Page tuners or Paramount banjos...but the tuners pictured above, in the first post photos, (when the "close-up" photo of the back of the headstock is greatly enlarged) clearly show an "E" stamped into the housing.

Thanks Scott. These must be what Paramount people call the Page "E" tuners but we'll see if anyone here on BHO can confirm.

Here are a couple pics of Page E tuners I had 6 years ago. I think the earliest banjo I had them on as OEM equipment was a Paramount Junior or X from the 1930's. The most modern banjo I saw them on was a Kyle Creed from the 1970's. I think the earlier tuners had the words cast, or stamped and the later tuners were blank. 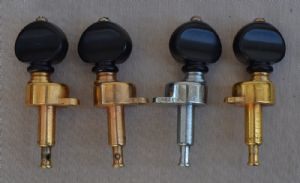 The Page E tuners I had were very unique where the tuner button met the peg. Not sure if they were newer or older than the other pics posted. 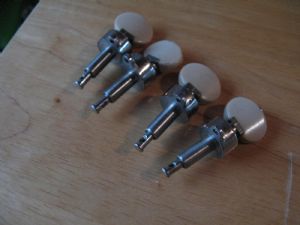 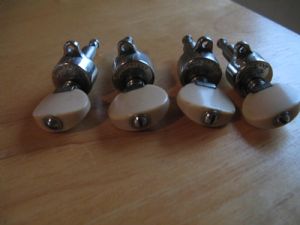 I have a few Lange banjos currently with the Page E tuners. I also believe I have 2 sets of them in the parts bin. I will have to look back at few restorations to see what models I've had them on. I will get that info here as soon as I can.

My Super Orpheum 3 has those tuners, and your serial chart from a few years ago puts it at 1928.

I've got a set on a Lange tenor and some in a parts box. Are these desired tuners for some reason?

I've never heard that Page E tuners were particularly collectable. I'm trying to pin down when the E tuners were introduced so that this information can be added to Orpheum and Paramount benchmarks for conjuring a serial number date chart. What style/model Lange tenor do you have and what is the serial number? Does it have "Lange Made" stamped anywhere?

ahh. the lange tenor i have is an off make with no serial number so i cant tell you a date, sorry.

Kyle - That's okay. I think I've answered by own query about the Page "E" tuners. What a surprise (I think). If I'm not mistaken the Page E tuners were out by at least Oct. 17, 1925! Attached is the equipment page from Lange's Orpheum catalog which was published about Oct. 17, 1925. The peg depicted in the catalog looks like the Page "E" tuner. We have a Page "E" housing (from Paramount Junior 13563) stamped with a patent number 1710802 and I've attached the patent drawing. The application for this patent was March 19, 1924. Note that in the patent drawing ,the image in the catalog, and the actual Page E from the Paramount Junior have the winding mechanism and the peg button off center. I'm reasonably sure the 1925 catalog picture is the Page "E".

So, people studying Paramount (and not Orpheum) miss the Page E until Lange decided to put them on his new 1930 Paramount Junior. Meanwhile select Orpheum banjos were getting the Page "E" pegs in the 1920's but I don't know which ones. Actually, for dating banjos I never wanted to get into hardware because hardware can be changed and as such not a reliable indicator of build date.

But anyway, for Paramount we know Lange put them on his new 1930 Paramount Junior. For Orpheum we know Lange had been using the Page "E" since the mid-20's and not a good benchmark for dating Lange Orpheum banjos. 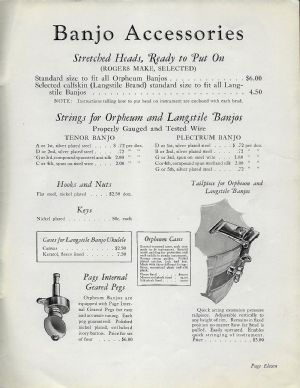 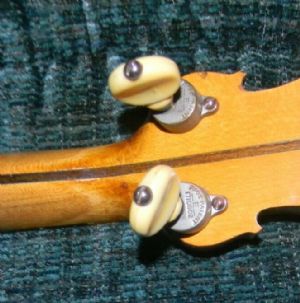 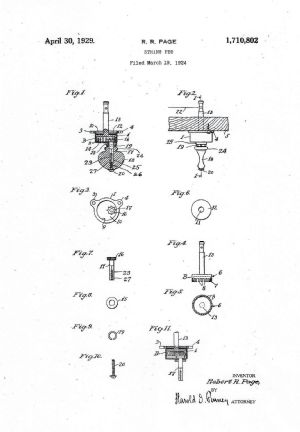 Clifford Essex used the Page Type E peg on their Paragon Banjos, from c1927/8.
After they stopped using the Waverley Tuners.
Keith

Here are a few pictures that I was able to grab quickly, time is limited this week for me. I have a Supertone Orchestra with gold page E tuners. There are 2 pictures of my current Super Orpheum 2 with a Page E tuner from a Challenger I am restoring, and a Page E tuner with a square metal part where the button meets from my parts bin. Unfortunately, I can't remember where that set of tuners came from. Notice there are some differences with the writing and patent number. I don't believe there is a serial number for the Supertone and Challenger. 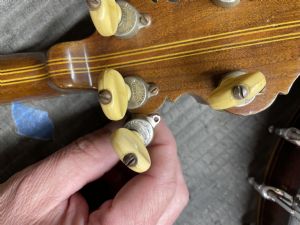 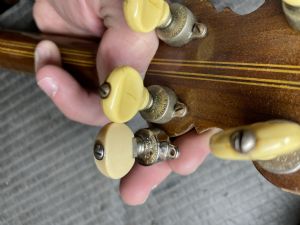 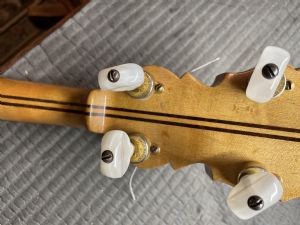 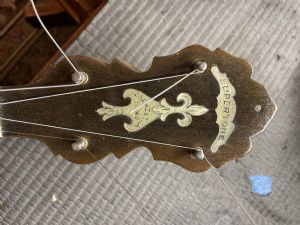 Attached are some pics of a Page tuner that I have never seen others. I call it the "Page Mickey Mouse" The cast letters going around the housing say Pat. Page 'Geared' Peg P'nd'g. The housing is die cast as is the ring gear. The star gear and string post are machined from brass. 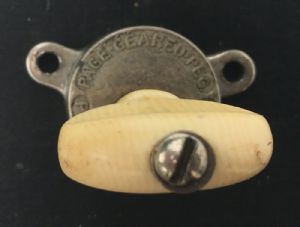 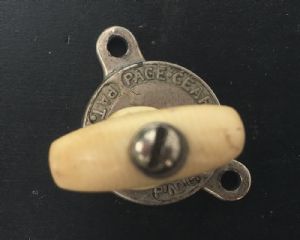 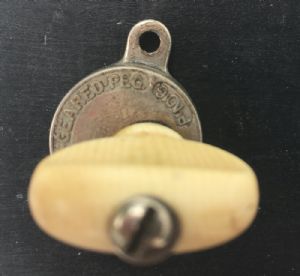 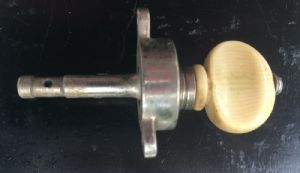 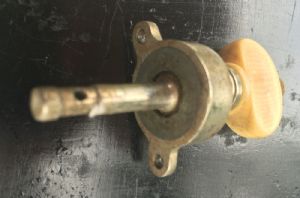 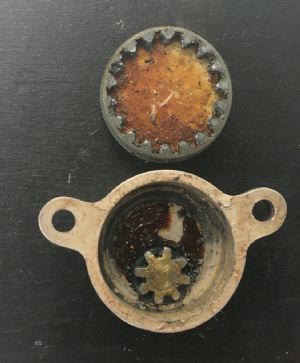 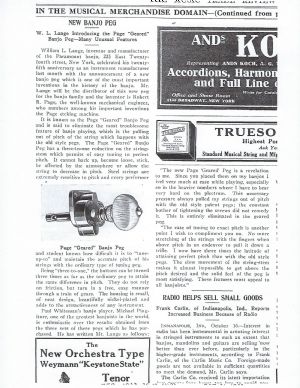 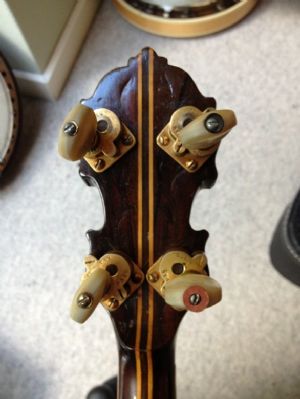 Page Pegs screws on the same side