This week I purchased a Whyte Laydie banjo neck from Bernunzio to use on my 5 string conversion project. I was planning on pairing it with an old Vega little wonder rim that was once a banjolin. Unfortunately, the dowel stick is too short and I'not quite sure what to do. I still have the original vega dowel stick so I'm not sure if that could be utilized.

I am by no means a luthier and know very little about this stuff. Any help would be greatly appreciated.

Below Is a photo of the original lanolin neck and the new Bernunzio neck... 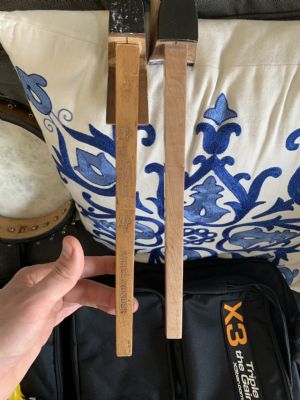 Bernunzio clearly states in their website description of the neck that " . . . the dowel stick is intended for a 10 3/4" pot and has been dowelled horizontally through the heel prior to the cap's installation; extending the stick or removing it will be required to fit the neck to a larger pot."

To extend the stick, you can graft new wood to the existing wood. The easiest way that will give any strength to the joint is to cut long complementary angles on the existing stick and the new wood, giving you a simple angled joint. But a mortise and tenon joint would be much stronger. You have the choice of a V joint, a dovetail joint, or a simple rectangular joint. Any competent cabinet maker can execute the work if you do not feel capable of doing it yourself.

If such a job were to come to my shop, I would fit the heel to the rim before installing the extension so I could determine whether I needed to correct the angle of the extension when I was ready to install it to the rim. I would leave the new section 1/16" to 1/8" oversized on all faces until after the joint is glued together. That would allow me to make any necessary adjustments to allow the end of the dowel to strike the rim in alignment with the hole for the tailpiece bolt. I would not cut the extension to final dimension until I was nearly ready to install it on the rim.

To install the original Vega dowel stick on the new neck, you will have to remove it from the Vega neck. If it is not loose, it will have to be steamed out. To remove the Eastman dowel stick from the Eastman neck, the simplest way would be to cut it off nearly flush to the heel, and dig the rest of it out of the heel with the tools of your choice. If you do not want to do this job yourself, you will need to have a luthier do the work.

Whichever way you choose to handle the dowel stick, the heel of the new neck will have to be fitted to the banjo rim.

Zach Hoyt in upstate NY is the closet person to you that I know of who can probably handle the job if you want a luthier to do the work. Smakula Fretted Instruments in West Virginia routinely removes and installs dowel sticks and fits neck heels. Or you can send it to one of us deeper in the south.

I grafted a dowel stick in a Washburn tenor. It was OK, but in retrospect replacing the entire dowel stick would have been easier. If i was making a new OT-style banjo, I'd use co-rods. My newly-acquired RK California Deluxe has co-rods and it sure makes it easy to tinker with.

I bought a Bernunzio WL neck for my old MayBell and the dowel stick mounting hole doesn't match up to set the neck. I will have to move the hole and repair the rim. Unless I just plug it and use co-rods.

A properly made scarf joint that's at least 1 1/2" long would be more than strong enough for a dowel stick and not require the dowel to be removed from the neck.  a "V" joint would also work, and probably be stronger, but would be more difficult to do.

Modern glues create a joint that's stronger than the wood, and you could even pin it if you were nervous about the strength.

Exactly what I said, keep the Vega dowel with the pot so the numbers match.

If you scarf the dowel stick, one other possibility would be to hide the scarf joint by inlaying the top surface with a decorative reinforcement. Though it would probably be overkill as Ken noted. 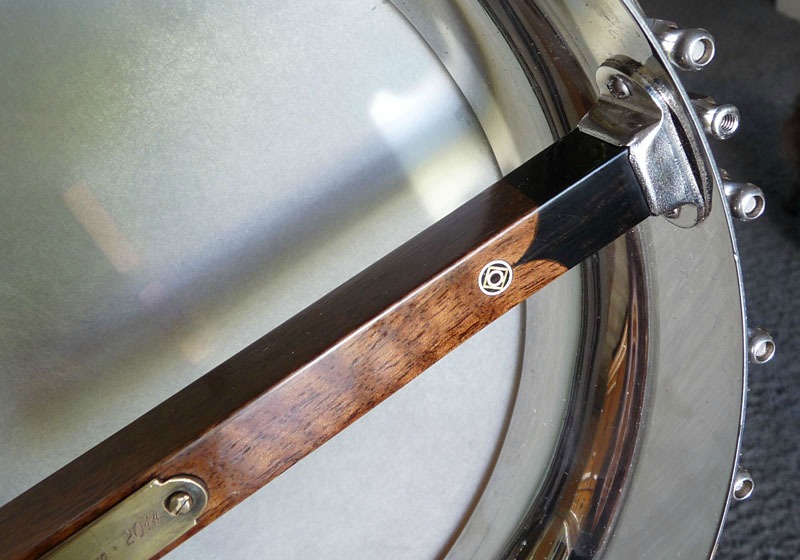 Exactly what I said, keep the Vega dowel with the pot so the numbers match.

Strange things come up now and then—I had occasion to convert a snazzy 1920 Vega No.9 plectrum the pot of which had been jerked around, to a 5 string longneck.  On the fancy plectrum neck, the heel was carved and the fingerboard highly inlaid and engraved.

The owner wanted to give the neck to a player we both knew, who was going to put it on some old pot he had that could never be confused with a Vega No.9.  I thought that in this case, the dowel should stay with the neck as an identifier of where the neck originally came from for posterity.

The person I was making the conversion for had wanted to take the dowel out and put ot on the longneck I was making, which would have made no sense at all—Vega never made any longnecks until the Pete Seegers circa 1957.  I told him I didn't want to do that on the grounds that it should stay on the original neck.  He liked the dowel, and told me that if I could make a dowel that had the appropriate markings on it, he'd accept that on the conversion neck, so I did that, making the fake dowel from curly maple (unlike the original) to match the conversion neck.

I didn't feel I was guilty of art forgery because even the most idiotic antique dealer wouldn't believe that there was such a thing as a 1920 Vega Pete Seeger No.9 with a sunburst neck finish and the 1960s Vega logo on the peghead—at best it would be perceived as a joke.  Pete Seeger, born in 1919, would have been one year old in 1920.

So now there are two unlikely "Vega No.9s"  with the serial #51212, one being a 5-string longneck that anticipated the invention of 25 fret longnecks by 30 years, and the other a plectrum with a fancy neck and a mystery pot.

If you bought the neck from Bernunzio, talk to them and ask what they recommend. They may have one that DOES fit your Little Wonder pot (what diameter is it?), and potentially could swap with you. I deal with Bernunzio and they are fine folks to work with.

I actually have one of those necks on a late 20s Tubaphone complete with original dowel
one of my favourite banjos, certainly the sweetest sound I have ever heard from any banjo, I have yet to acquire a LW to join my little gang of Vegas. Ken I have never seen two identical dowelsticks before, that is pretty amazing.

I'm just finishing a build with one of those necks on an 11 15/16" Vega Style N pot. I opted to make a new dowel stick instead of grafting on an extension and am pretty happy with the result. The hardest part is getting the new dowel glued in at exactly the correct angles. Grafting the extension on maintains the angles as it was designed. If removing and replacing the dowel stick, I'd make a jig first that blocks in the exact location and angles of the stick that will help you glue it in at the same angles.

As others have said, the heel will need to be fitted to the different style of pot, but I found that is mostly trimming the heel cap. Good luck!

I wonder if you couldn't just have a decorative antiqued brass ferrule made as an extension.

I'd make a matching block, same dimensions, out of maple, then I'd use one of these, the same size as the tailpiece ball screw, that went into the Eastman dowel stick, then cover with one of these. Wouldn't even be able to see it and you're not doing anything to the existing dowel stick.

Too bad you're not closer bud. I'm in central MA and would gladly help you out.

Really? Where in Ma are you?

There's your solution. Islands, bridges, ferries, and toll booths not withstanding, Mass. is simply not a very large state, and it can't take too many hours to get there. That is, as long as you don't get caught in a traffic jam.

I did consider using that exact Rickard ferrule and grafting an additional inch plus scarf onto the dowel stick so it would fit the 11 15/16" rim. As luck would have it, I was doing work on an early Rickard at the exact time I was making this decision. I found that the ferrule was for a dowel stick that was almost 1/8" fatter than the one on the Eastman neck and didn't feel it would quite work. It's a beautiful ferrule and you may have more luck with it than I did.

'Recommendation for a CLEAR finish' 2 hrs

'A song for Koriander' 3 hrs

'Instagram/Youtube Attachments - Exactly what is this ?' 7 hrs

'Looking to buy a rim-turning lathe near me' 7 hrs