I have been playing banjo since 1965 or so. I play mostly Scruggs style, but my style incorporates lots of licks from a lot of players, incluidng melodic. I play a "sort-of" clawhammer, but I want to refine it. I especially like Round Peak style. At this stage of my life, I find clawhammer more listenable and more suitable for solo performances. I just acquired my only playable openback, an RK RB-024 and absolutely love it.

Any advice, such as repertoire, books, videos, podcasts, or whatever resource for learning? I have searched cyber-land, but there are just so many choices, I'm just trying to whittle down to the best ones. 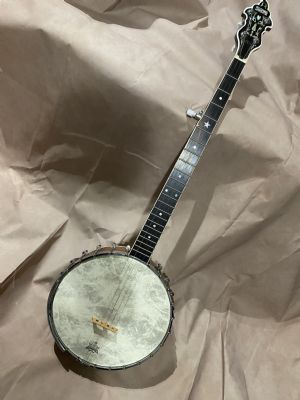 If you are looking at playing Round Peak style, you'd be hard pressed to find anything better than Brad Leftwich's 'Round Peak Style Clawhammer BAnjo' book. I recommend buying the paperback edition rather than Kindle. I have the Kindle version and find it hard to read... the tab can't be zoomed so you are stuck with the size presented on your screen, which I find a tad too small (your eyes may vary). The book comes with audio files so you can learn by ear once you get the techniques specific to Round Peak down pat.

Since you already are familiar with Bluegrass banjo and Clawhammer banjo, I assume you don't need any beginner's books, so I suggest the following books about Round Peak Style.

Brad Leftwich's Round Peak Style Clawhammer Banjo is a must

Check out Tom Collins' Banjo Blitz series on youtube or his Banjo Quest Patreon site. Agreed that Brad Leftwich's book is a must have.

I don't have any tips for you, just wanted to chime in that I also have an RK RB-024 and I really love mine too. It's a great banjo, and I'm not even going to add "for the price". It's just a great banjo, period.

Before he did Bank Blitz, Tom Collins did a three video tutorial, Elements of Round Peak Banjo.

I first learned clawhammer from Pete Seeger's book back in the 1970's. Not knowing whether I was doing it right, I fooled with it for several years before I ever had a chance to watch somebody who really knew what they were doing. I was living in upstate NY when I got my first banjo. Nobody up there frailed except for a guy in my college dorm who was also just getting started. The books were our only guide, and we kept watching each other and asking "do you think this is right?" and answering "I don't know."

It turned out that the Seeger instructions worked really well; although when I attended a banjo workshop many years later given by someone who shall remain nameless, they told me I was doing it all wrong because I wasn't arching my wrist. Well, 30+ years later, I still don't arch my wrist, and I get by all right, and nobody else has told me my technique is no good.

My introduction to drop thumb was from Miles Krassen's book on clawhammer, but I believe that there are better methods out there these days.

I never heard of "Round Peak Banjo" until the late 1990's. We just frailed.

The great thing about frailing is that after you get the hang of it, if you lay your banjo down and don't play it for several years, you can get your stroke back in just a couple of weeks.

Some people out west here define Grandpa Jones as a frailer.

then Claw by Joe Bethancourt was Tap, Tap, Hit. So he used more melody notes.

I am re-learning fingerpicking on guitar with first finger downbeat instead of thumb.
Also re-learning two finger on banjo.
And next Round Peak, one of my customers plays it exclusively on a skin head.

I agree you have a real standout in the market, they sell out. I can't wait to get MY hands on one.

New Book by Frank Converse - Discussion Forums - Banjo Hangout
banjohangout.org › archive
So, when will you have all the tunes on video, Tim? Next week? big ... Edited by - Old Cremona on 07/17/2012 16:49:28. Rob MacKillop ...
LabeledArchived ...Forum
Early Minstrel Recordings? - Discussion Forums - Banjo Hangout
banjohangout.org › archive
I know of none, but there is always stuff being found in old archives and university collections so things may have ... You can watch the videos for some Rocket Science Banjo subjects starting here: ... Check with Old Cremona.
LabeledArchived ...Forumhttp://www.banjohangout.org/archive/233838

Take a listen to Riley Baugus. There are a number of videos of him on Youtube as well as recordings. He is a fine young Round Peak player from NC. He often leads workshops at some of the Banjo Camps.
Best to you in this transition. I think you will enjoy playing in old time jams.
GerryH

'Recommendation for a CLEAR finish' 3 hrs

'A song for Koriander' 4 hrs

'Instagram/Youtube Attachments - Exactly what is this ?' 7 hrs

'Looking to buy a rim-turning lathe near me' 8 hrs