After a spell of really cold winter back in February, minus 30 C for an entire week, it got warm. Everything melted, temps rose to plus 10, and it looked like spring was around the corner. Then we had a "special weather event." Temperatures went back down well below zero, and the snow came back. Last week things eased up once again. We were up at plus 15, it was sunny, the trees were in bud, spring was on the way. Today, again, nope, it's minus 2, we've had 10 cm of snow overnight with more of the way. It's snowing right now as I write this. I've never seen anything as crazy as this, and I've lived through a lot of Canadian winters.

When I was growing up in Michigan we called it "Spring."

Which is probably why I like living in Florida so much now....

Apparently the blizzard that precipitated [pun intended] Manitoba's "Flood of the Century" started on April 5/1997.   Two of our daughters were storm-stayed at the #1/Hwy.16 Petro-Canada for a couple or three days.  https://www.cbc.ca/news/canada/manitoba/1997-blizzard-flood-manitoba-1.3521262

In the early part of the 80s we had a blizzard on May 10 [or 12th?] that dumped a foot of heavy wet snow on some just vaccinated/castrated/dehorned grasser cattle that didn't help a young guy trying to get his farm operation on a sound footing.   I forget which winter ['92?, '95?] started out so mild the ground was still thinking about freezing by late December, so I went out and seeded some alfalfa on the 31st. ..... just so I could say that I did some seeding on New Year's Eve.

My mom lived in west central MB from about 1916 to 2004.... she said throughout the years she'd seen snow falling in every month of the year except July.

Fwiw, without checking stats, my wife and I both see this as not too, too far from normal spring weather.... following a winter that was noticeably "easier" than normal.    But, being retired makes all the winters a bit easier.

Now they're saying that we're going to have another 5 cm today, 5 cm overnight, and yet another 5 cm tomorrow. It's a good thing we have a lot of food in the house, because I am NOT shovelling my driveway in mid-April.

Lefty, the snow here seems about right for snowmen.   Would a few trips up and down your driveway kill two birds with one stone, as it were?    Heck, when all's said and done you could have enough of 'em to have the TV station(s) come around for one of those "local interest" stories.

It's what my mother used to call heart attack snow -- wet and heavy. She insisted my father buy a snowblower because she was so afraid he'd drop dead in the driveway, shovel in hand.

This is going to help the farmers on the prairie except for those who planted way too early.

KnowsPicker - People who relocated from up north to Florida pay for those nice winter days during the oppressively hot summer days. It just "sucks" the energy out of me. In the summer I would rather be in western Michigan or extreme northern New York. Places where you need a light blanket when you sleep at night.

I moved here in 1982 and haven't had to shovel any sunshine yet.

Also, three words to look for:

I wonder whatâs going to happen to the robins who arrived a week ago?

This is going to help the farmers on the prairie except for those who planted way too early.

My limited understanding is that seeds need a certain length of continuous time [several days and nights??] at a specific temperature [+15 C. ??] in order to germinate.... so my  guess is that the seeded crops have yet to germinate.   In any event, I expect at this point it's probably only a very small percentage of the acreage, and likely done by bigger (?) farmers who calculated the risk.   I think a bigger concern is frost after crops are up.

One year I figured the seed could sit just as well in the ground as in the granary.... so, as a bit of an experiment,  I seeded 20ish acres of oats/alfalfa in November, well-past the risk of 15 C.  In that instance, it turned out just fine.  I've also had good results broadcasting clover onto the snow in small sloughs in pasture, since waiting for them to dry up in the spring [summer??] didn't fit with my logic.

Now.... in case you're going farming, I'm just reminiscing, NOT handing out advice.

We also have had a lot of ups and downs with regard to temperatures. We had above 20Â°C by the end of March and also night frosts recently. I read that this is becoming more likely because of climate change and can be a problem because fruit trees tend to blossom earlier but can then suffer from the returning frost.

We almost hit 80F last week. I mowed the lawn for the first time today wearing a heavy jacket. There's a chance of snow mixed with heavy rain predicted for Friday. I love spring, it never disappoints.

Air temp doesn't matter as much as soil temperature, 2" down. Measure it.
Buds swelling and changing color on my lilac bushes. Peonies along the foundation are up 2".

I'll start pruning tomorrow, hard to tell the die-back from the -35 cold spell in February.
Could have knocked off maybe 1/3 of the flowers already formed in the buds.
I expect to lose some wood but need pruning anyway!

In the Russian Far East ( southern Siberia), it's common to spray fields with a coal dust slurry as the black soaks up more sun heat to get the soil warmed up faster.

It snowed in Winnipeg on April 28, 1900.
I cleared off 3 driveways yesterday.

This was on CTV Manitoba's SkyWatch Weather Pic Of The Day a day or two back [not sure, but I think it was in Winnipeg]: 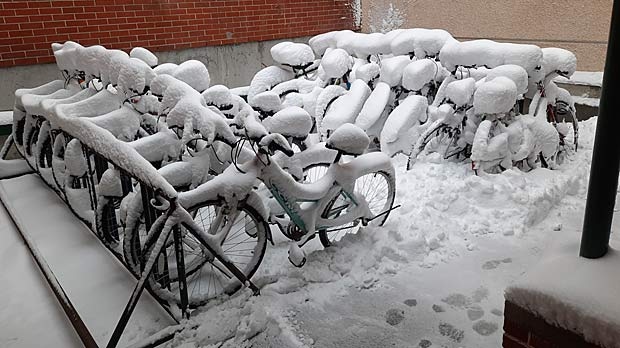 Weird weather is right. We are now at about 70*F and we haven't seen rain for several days. My sister on Vancouver Island has just cut her lawn for the second time. This can't be Vancouver or maybe this can't be spring.

Forecast high for Saturday is 67*F (-*#~ celsigrade) , then Sunday itâll be 38 for a âhighâ. Normal for this area in spring being so close to the Rockies.

That's all well and good, Brian..... but what is it West Of Medicine Hat??

Edit: Chuck, do you also apply the same principle to driving [speed /distance]?   "Not guilty yer honor, the country may have switched .... but on principle I read the 100 KPH sign as 100 MPH."

'Way back my dad was trying to explain to me how the Imperial system was so much simpler w.r.t figuring out seeding and herbicide application rates.  I think he saw a tiny ray of light when he got to multiplying something or other by 9/16ths.

I've been out of farming for a couple of decades, so I don't know just what's in vogue now.... I think the marketing is in metric????

If it got to 31*F we put the hose out through the basement window and flooded the backyard rink. -1 Centilsius didn’t cut it in 1964.

really, Owen,,,, what would your Dad think about acreage tallied in "hectares" ?

He didn't like it .... more so on the grounds [pun intended] that it was "change" rather than what the units were called, from what I could see.  I remember him and Mom getting worked up about prices of foodstuffs in jars and cans..... again not because Imperial was any easier [it ain't, but that didn't deter them], but rather because it was "different."  However they did see my logic in that we generally bought the sizes we did because the size of the container looked to be the size we wanted.... nothing to do with the weight/volume specs.

This is a pic of the threshing machine they donated to the MB Agric. Museum.... there's another spot where he'd written, in pencil, a couple of the neighbours names / field sizes [in acres] and the yield.  I suppose that was the paperwork.... account to be settled after harvest was complete. 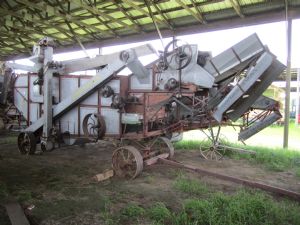 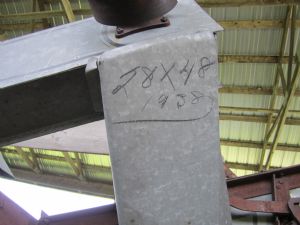 Gee, Owen, you gave all THAT up to go teach in the northern bush?

Just what kind of principle is that, Chuck?

"I refuse to use that system because it's simpler and makes more sense."

You know you wanna.

Just what kind of principle is that, Chuck?

"I refuse to use that system because it's simpler and makes more sense."

You know you wanna.

I have no idea what km per litre means.

Segovia visited Chet Atkins in the 1960's,,, that was before he knew Chet played an electric guitar