TOTW 5 March 2021 Rose Conley (Down in the Willow Garden)

Going to rehash a TOTW that was done over 11 years ago by Sean Barth (mojo_monk).  Since it looks like his recording is no longer up (the link wouldn’t work for me), I figured it might be fun to re-do “Rose Conley” also known as “Down in the Willow Garden.”

Sean has a great site dedicated to two finger thumb lead https://2ftlbanjer.wordpress.com, and between him and Jan Olov (sorry, I think Jan has a link to his tabs but I couldn’t find it, hopefully he sees this thread and posts it) and my friend Chris Berry (who has one of the best tutorials on getting started in the style here ), you’ll learn about all you need to know to play this style (and a lot of listening to the great old & new players as well).

I started out playing 2FTL in the early seventies, teaching myself from Art Rosenbaum’s great book Old Time Mountain Banjo and listening to the original masters on LP over, and over and over.

2ftl isn’t a very difficult style to play, and for that reason I prefer it for songs vs. tunes. I’ve got a few examples up on my BHO page if you want to check out more.  Enough about the style, let’s check out the song.

mojo_monks original TOTW is here with some great info https://www.banjohangout.org/archive/170119 .  Rose Conley (or Willow Garden or Down in the Willow Garden) is an old song, traced back to at least 1811, and originating in Ireland most likely. The tune itself is a variant of “Rosin the Bow.” From Wikipedia:

“The song may have derived from Irish sources from the early 19th century. Edward Bunting noted a song by the name "Rose Connolly" in 1811 in Coleraine.[5][6][7] A version with slightly different lyrics is known from Galway in 1929.[5] There are lyrical similarities to W. B. Yeats' 1899 poem "Down by the Salley Gardens", which itself probably derives from the Irish ballad, "The Rambling Boys of Pleasure".[5] The first versions of "Rose Connoley" probably derive from the Irish ballads "The Wexford Girl" and "The Rambling Boys of Pleasure", or similar songs.[5] "The Wexford Girl" gave rise to "The Knoxville Girl", a very similar murder ballad to "Down in the Willow Garden".[3] Unlike other Irish ballads, "Down in the Willow Garden" was initially restricted to the Appalachian region of the United States, and D. K. Wilgus mused that "It is as if an Irish local song never popularized on broadsides was spread by a single Irish peddler on his travels through Appalachia.”[5]  It is first noted in the United States in 1915, when it was referred to as popular in 1895 in Wetzel County, West Virginia.[4][5] Cecil Sharp came across the song in 1918 in Virginia and North Carolina.[5]"

The songs popularity and versatility lies in the fact that it has been record over 70 times, by artists as diverse as Grayson & Whittier to Art Garfunkel and Shakey Graves.

Of all of them, Grayson and Whittier’s version is my absolute favorite, and I’ve been playing this for over 40 years now based on their version. If Grayson and Whittier are new to you, go find their music and let it completely soak into your soul to gain a deeper understanding of this music we call “old-time.”.

The duo was comprised of blind fiddler G.B. Grayson who was born in Ashe county NC in 1887, and guitarist Henry Whittier who was born in Grayson County Virginia in 1892. The two were extremely influential in county, bluegrass and folk-rock circles, with folks such as Bob Dylan, Mick Jagger, Mac Wiseman, The Stanley Brothers and The Kingston Trio playing their songs, primarily from being the first to record “Tom Dooley.”  G.B.’s uncle James Grayson (1833-1901) was instrumental in the capture of NC fugitive Tom Dula in 1868, whose story the song is based on, and yes, he's the "Grayson" mentioned in the song.

An oddity of the Grayson and Whittier version is that they start out playing the song with an A & B part (for lack of a better term), but then exclusively stick with the higher “B” part for the rest of the song. Since I learned it from their record, this is how I play it, and have always included their “moral interludes” in between verse as well.

I’m tuned down a step or two from standard “G” for this recording, and play it at a little quicker tempo than most.  It’s not a hard tune to learn and sing, hope you give it a try and enjoy it…

What a fine performance, RG, I love your deep, world-worn voice, just right for these old-time ballads. Waltz time is tough to do in clawhammer, but once you master it, it becomes hypnotic and addictive. Take warning, people.

The melody of Rose Conley comes from the old Irish waltz and ballad, Old Rosin the Beau, and it's been used for other songs as well, including Acres of Clams, When I First Came To This Country, and even a campaign song for Abe Lincoln, called Lincoln and Liberty. I worked this up almost 20 years ago, in order to play it with my pal Ed Britt, and it was one of our favorite duets.  I've looked all over, but it isn't among the many tunes we recorded.  I recorded it alone back in 2017, probably for an earlier post here on the Hangout.

You’ve got a voice so deep it’s perfect for this lovely ballad. Fine write up too and great picking.
Don and Ed’s duet is lovely and flowing too with those silky smooth slides Don gets from his banjo.
Treat  of a TOTW for sure.

Neill wrote: "Don and Edâs duet is lovely and flowing too with those silky smooth slides Don gets from his banjo."

I appreciate the compliment, Neill, but that's just me playing. What you hear in the background is just the MIDI playback I used to practice with. Ed and I did play this all the time, he did a wonderful job on it, but I've search high and low and can't find a recording of us doing it. :-(

One of my all time favorites since I was a teenager, and this performance is in the top 2 or 3 I've ever heard.

Step back Springsteen! There's a new BOSS in town!!!

RG's one of the all time greats, both as a performer, scholar, and purveyor of the music.  He's far from well enough known except to the us aficionadoes.  he needs to be on the soundtrack of a whole bunch of movies.

His efforts at Old Time Tiki are invaluable.  See the January 2018 Banjo Newsletter for a feature interview with RG.

Being able to rub elbows with folks like RG is one of the uncommon benefits of logging onto the BHO.  Think about it. If you were a rock-and-roller, is there anywhere could you log on and have personal contact with Mick Jagger or Robert Plant (better quit now- my age is showing).

PS:  Don Borschelt's magnificence is obvious as always.  I never fail to be blown away by his greatness.  Never a better OT 3-finger stylist.  I hope all of the youngsters out there are sitting up and taking note!  This stuff needs to be perpetuated.

Very interesting also the version by Roscoe Holcomb, in 4/4 instead of 3/4 waltz:

Thanks Don, sure appreciate the nice comments. I'm always blown away by your playing and take on this music, your version of "Rosin..." is MIGHTY fine... could listen to you pick all day! Thanks as well Neill, my voice is pretty damn nasty, but I've always kind of agreed with Dan Gellert that the one thing missing from most banjo playing is voice. Love these old songs with banjo accompaniment.

R.D. you're WAY generous with your comments. Mick Jagger or Robert Plant? More like the way Leo Kottke described his voice... "geese farts on a muggy day." Appreciate the kind words though, they mean a lot coming from someone who's playing I really admire.

I will do a Roscoe version of this in three-finger picking and post it here. Probably tomorrow…

It's one of my favorite songs, and one I'm proud to have in my repertoire because it's one of the few folk songs that actually came to me via the folk process. I learned it from my father, who learned it from his mother (though I suspect that she learned it from the Osborne Brothers' recording...).

I will do a Roscoe version of this in three-finger picking and post it here. Probably tomorrow…

Awesome!  Looking forward to that Emiel, always enjoy your takes on tunes/songs!

It's one of my favorite songs, and one I'm proud to have in my repertoire because it's one of the few folk songs that actually came to me via the folk process. I learned it from my father, who learned it from his mother (though I suspect that she learned it from the Osborne Brothers' recording...).

That Osborne Brother's take is one of my favorite BG versions,.  Pretty cool that you learned it the "old-time" way from your dad and grandma... enjoy your take on songs, if you get a minute to record one, would love to hear your take on it Matthew...

Thanks all, very nice. Here is one of my favorites, by Scott Law and Tatiana Silver Hargreaves.
youtube.com/watch?v=tA81ChMZdoA

The pair recorded a series of songs in 2011. If you search youtube for "Law and Hargreaves" or "Mark's Memories" (youtube channel) you will find them. Tatiana plays frailing banjo on this song, violin on others.

From The Transatlantic Sessions:

Alright, here it is in 4/4 time (like Roscoe did). Tuning: gDGBD. Banjo: Iida openback from the 1970s/20-hole flathead tonering. 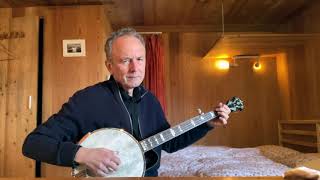 VIDEO: Down in the Willow Garden
(click to view)

Emiel thatâs Roscoe in the flesh. Great playing and singing . My painting of Roscoe on the wall looked like it smiled while I was playing that. 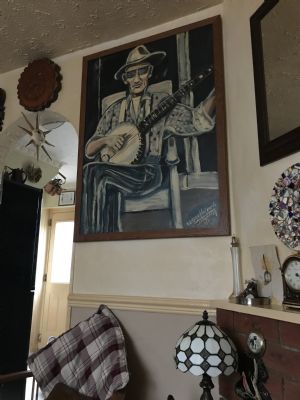 Emiel that’s Roscoe in the flesh. Great playing and singing . My painting of Roscoe on the wall looked like it smiled while I was playing that.

Alright, here it is in 4/4 time (like Roscoe did). Tuning: gDGBD. Banjo: Iida openback from the 1970s/20-hole flathead tonering.

Real nice Emiel!  Sure enjoyed that!

Your vocals are always a treat, RG. It's indeed a good one to re-visit after eleven years and interesting to hear the various versions and right-hand styles.

I've known this one for ages, but the lyrics scared me, so I only play it as an instrumental. :)

Down in the Willow Garden (TOTW)

Down in the Willow Garden (CH) tab

Thank you Janet, although I'm not sure "treat" is the right word...

Your version is, as always, really nice! You have such a great touch on the banjo!