They’re slowly making a comeback in various areas of the west.
cbc.ca/news/canada/calgary/wat...1.5928563

.      ....As I understand it a herd was introduced in the wilds (?) of MB's north Interlake region.  I  haven't read anything lately, so tried to check in via Google > Wpg. Free Press and Brandon Sun, but both require that I subscribe.

.... but this article gives some info: https://www.pewtrusts.org/en/research-and-analysis/articles/2014/10/16/new-wilderness-park-protects-boreal-forest-bison-in-canada

Pages 95-103ish of this 235 page scholarly tome review several possible and ongoing reintroduction plans in a number of places in both USA and Canada. including Waterton Lakes. https://www.pewtrusts.org/en/research-and-analysis/articles/2014/10/16/new-wilderness-park-protects-boreal-forest-bison-in-canada

The Wood Buffalo (Bison) is larger than the Plains Buffalo, but “on the other hand, plains bison are capable of running faster, reaching up to 65 km/h (40 mph),[14] and longer than bison living in the forests and mountains.”  Interesting that those 13 Wood Buffalo introduced to the Interlake Region now number over 300.

âTribes had lived a largely nomadic life while following the herds across the prairies. At one time, there had been as many as 50 million buffalo on the North American plains. Even in the early 1870s, there were herds so vast that it took several days to pass them.

Then two technological advances spurred the rapid slaughter of the buffalo. The demand for buffalo hides surged when a useful tanning method was developed. The method allowed the soft hide to be made into tougher, more desirable leather.

The other advancement was the development of the repeating rifle, allowing hunters to kill buffalo in huge numbers.

By the end of the 1870s, millions of buffalo had been slaughtered for sport, profit and military gain. Killing buffalo even became a past-time as sportsmen from Britain traveled to the plains to take part in the hunt.

When Canadian settlers started farming, the first cash crop for some was buffalo bones, sold by the ton for fertilizer.

Fearing starvation, natives agreed to sign treaties with the white man. Many gave up a nomadic way of the life and agreed to settle on reserves. Within a short time, a way of the life that had sustained plains natives for centuries was gone.â

Glad to know the buffalo have a chance for a comeback.

But, let's not forget that they are big, strong, and wild.

Not domestic animals in a petting zoo.

Saw news not long ago about a baby boom in the little Banff bison herd: 10 calves!
For years, I hunted Canada geese in a big pea field next to the local ranch bison pasture.

I have experience. I am an expert after eating 6-7 of them over the past 20 years.
It's all fabulous lean meat and really economical, a side at a time. The real giggle was to grill steaks or kebab roasts and eat with a fork only. So tender that no knife was needed, year after year after year. Then I'd barter for elk, moose, venison, cougar and fish.

You never ever chase wounded geese into the bison pasture. The bison will approach you with the friendliest of intentions to crush you and stomp your lights out, just for fun.
They are as unpredictable and belligerent as Cape Buffalo. Don't mess with them.

The rancher is about 6' tall. That bull is at least 7' at the hump. 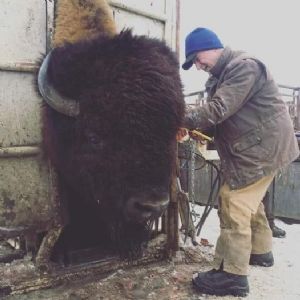 Some Bison are no pure bred. The Fort Peck Reservation provided a New York City zoo with some Bison which are thought to be pure bred. The zoo hopes to increase the number of pure bred bison.

A streaming TV documentary described how much easier it is to raise Bison than domestic cattle. Withstand adverse weather better, easier to feed, and less damage to rangelands. The documentary said when the Bison are in a blizzard, they turn face first into the wind and have little trouble. Domestic cattle perish.

A scientist and his wife once suggested converting parts of the midwestern U.S. to large grazing areas for Bison. He suggest that Bison could replace the large complex and expensive beef raising industry.

I am guessing that the environment a young animal is raised in creates their temperament.
Africa has the dangerous Cape Buffalo. The Asian Water Buffalo is a domesticated animal and appears to be the same animal as the Cape Buffalo. In the streaming TV documentary the owner of the herd of Bison had raised an orphaned Bison calf. It was friendly.

Bison internal anatomy has some surprising features. I know these facts because I've seen them.

Bison butt heads more than you might notice. Cow skulls are a sheet of bone. That kind of head butting behavior should kill them. Bison skulls are built like the roof of a house: there are inner and outer layers. In between is a whole bunch of struts and scaffolding for weight saving strength.

That's really nice that they raised a "pet" orphaned bison. His name here was Rufus. Like for the movies, Rufus learned tricks for Oreo cookies. It certainly was friendly to those who raised it, to those people it is familiar with. Try being the first stranger in the pen. See how cute, cuddly, fuzzy bison reacts to you.
One critter does not make the generality. Bison have a mean streak a mile long.

The first time I saw a buffalo in perhaps 3/4 stride, I was amazed at it's gracefulness. No not a thoroughbred , but surprisingly steady.
My wife and I were both buffalos, from 200 miles apart. We met, we..., We married. Grew our herd, and now collect buffalos. But only if they are no bigger than a shoe. Brad

I doubt buffalos will ever be released to roam into too much of kansas. Too many cattle fences, roads, and cars. Ted turner bought the huge ranch I used to have hunting and fishing rights to. It is now a buffalo preservation ranch. That is a good thing, eh. Brad

The Wood Buffalo (Bison) is larger than the Plains Buffalo, but “on the other hand, plains bison are capable of running faster, reaching up to 65 km/h (40 mph),[14] and longer than bison living in the forests and mountains.”  Interesting that those 13 Wood Buffalo introduced to the Interlake Region now number over 300.

Similar thing here with red deer chuck.  Hill deer tend to be maybe 1/3 of the size of a woodland deer.  Exactly the same species, just how they've adapted to their environment.

The only economical way to enjoy bison without a camera is to buy a side at a time.
Hang 5 days at 38F then get it cut. (any longer and it dries too much).
Now do the bartering for other meats. I'd go straight across for game.
The labor costs work out to be similar by the time it's on your plate.

I'll caution you: you eat bison as your principal red meat for six months then go back to beef.
Beef has an oil refinery chemical taste from all ranches that takes a while to get past.

Local family guy with 3 kids, runs a trap line and hunts. Been slowly coming around to the idea that I might buy a side of bison then barter with Dougie for elk, moose, bear, venison and cougar. He's already expressed a little interest. For me, it's like going to the store and dropping $1,000 for a year's meats.

We have 3 kinds of deer. White tails and Mule deer that most everybody recognizes.
Then there are the little Columbia Black tail deer. Not a whole lot bigger than a Great Dane dog.

However, west coast vegetation is notoriously poor in Calcium, particularly in Columbia habitat along the coast. Really big penned off area of the University of British Columbia Research Forest.
Stuffed a bunch of Black-tails in there and gave them a calcium diet supplement. Wow. Nearly doubled in size.

Highway 16 in Alberta, Canada runs right through the middle of Elk Island National Park.
Consistent with Federal Gov't policy, EINP has nothing to do with elk. HAHAHAHAHAHA
Instead, the north side is wood land bison and the south side is plains bison. Some days they are both close enough to the highway fences to watch both herds.

Bison is a mild, meaty taste. Not as mild as elk but not as strong as venison so it's pretty pale.
Out here, the price has been good enough for a side and local butcher service.
I just don't eat nearly as much meat as I did, even 10 years ago.

we have a Bison farm about a mile or so west of here.....they sell butchered Bison products....burgers, steaks,, what ever...I refuse to eat Bison....(and I got native american in my bloodline) lol

'Does this Gibson look like a decent deal? ' 8 hrs

'Has anyone purchased this item from eBay?' 9 hrs