What would the tuning pegs be made of on a banjo from 1895 or so? I looked up plastic and that wasn't really a thing until 1907. I was thinking these were originals but then got to thinking about the year.  I would guess that those seam looking things mean plastic?  And does anyone know what tuners would be on a SS Stewart Universal Favorite from 1895-1898?  The pictures I see of others in this time period have the same tuners with the same seam looking line so that's why I thought they were original.  I still kind of think that maybe. 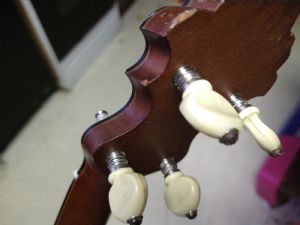 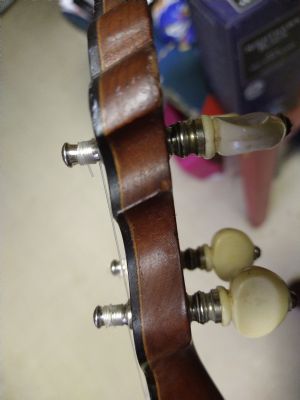 Those look to be the original tuners. The buttons are ivoroid (a plastic that predates 1907).

These pegs were invented by the same guy that invented the turnbuckle neck brace. They were a standard option and dropped into tapered holes with no changes needed.

The plastic is celluloid. 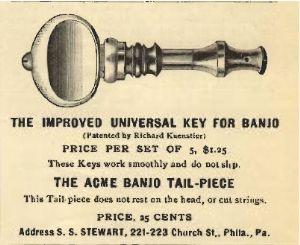 ok thanks! BTW, your bridge is great Joel. I like it a lot.

My S.S. Stewart from the same period has wooden pegs -

It was a thing before the Civil War.

The date discrepancy here stems from the claim by some people that celluloid, which goes way back into the 19th century, is not considereally a true "plastic," as it is mostly derived from cotton, whereas bakelite, from the early 20th is entirely derived from chemicals and is considered "plastic" in its truest synthetic form. 1907 and the "entirely synthetic" parameters both seem rather arbitrary, though, and most people would, in fact, consider celluloid to be man made, just as other plastics are. It certainly doesn't grow wild anywhere like thorn bushes or poison ivy.

Of course, if we consider celluloid to be plastic, that would probably make gun cotton, a very similar material from the same general era, the first plastic explosive.

And with that final thought, I hope I haven't managed to blow this thread to kingdom come.

The photos are not clear enough for me to see if the knobs are grained ivoroid or just plain plastic. If they are grained ivoroid, then the tuners are likely original. If not grained, than likely replacements manufactured anytime from the 1930's to the 1970's

I have attached a pictures to illustrate the two types.

One of the earliest uses for celluloid was an imitation ivory for billiard balls. That did not go so well with it's flammability combined with the cigar smoking in the billiard halls. 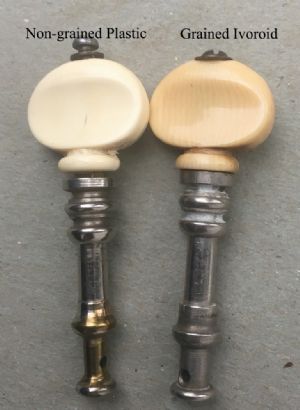 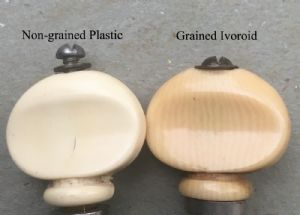 They are grained. Thanks. I tried to get a good picture but clearly failed.

Bob Smakula , thank you for the photos and the explanation for distinguishing ivoroid and plastic. It appears that the buttons on my Bay State 318 are plastic. I didn't know how to tell. The rest of the banjo looks to be original, so I assumed that the tuners were too.

I put some filters on the photos of his tuners and I'm sure at least two of them are grained. I'm assuming they all are.

I would love to see some sort of pictorial history of banjo tuners over the years. I would assume that the design of the typical "patent" tuners changed over the years but I do not know how to tell which are which. It would be nice to be able to determine the appropriate tuners in the restoration of an instrument, including 5th string tuners. I probably have a half dozen banjos that I know have their original tuners. I would be happy to photograph them and submit the photos along with the banjo information. The problem with doing something like that in a forum string like this is that it is not permanent. Once it is archived, the photographs are removed. Perhaps Bob or Joel would be willing to post something like this on their web site. I think it would be invaluable to collectors and restorers.

The original photos are clear enough to see the grain. Look at the area where the buttons meet the tuner shafts.

One of the earliest uses for celluloid was an imitation ivory for billiard balls. That did not go so well with it's flammability combined with the cigar smoking in the billiard halls.

I dunno, Bob--I think flaming billiard balls would liven the game up a lot!

Champion tuner blurbs from the late 1880s listed the buttons being available in black, white and ivoroid. I've not seen that image for years but I recall one paid a slight premium for ivoroidâ5Â¢ I think..

I've seen a few Fairbanks banjos made 1898-1902 with white knobs that were original.

I don't know about the Kuenstler patent pegs. I think all the ones I have from before the 20s are grained or black.

That's not true, Joel, and if I could find that old advertisement, you'd see it for yourself.

This, however, should do.

I don't know about the Kuenstler patent pegs. I think all the ones I have from before the 20s are grained or black.

In addition to black and white, grained ivoroid knobs were available for Champion tuners, as was a sort of amber-tortise color. 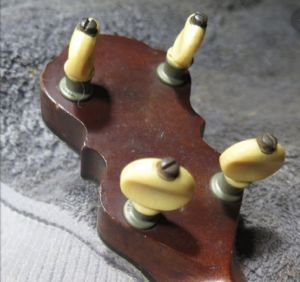 That's not true, Joel, and if I could find that old advertisement, you'd see it for yourself.

This, however, should do.

What is not true?  I did not say that they weren't offered in grained.  My point was about the white.

But the OP was not about Champion pegs.

'The latest thing to fret about' 3 hrs