What do I have here? (Hypothesis: Leedy Prototype?)

I've been meaning to ask about this thing for a while now...

I picked this up a few months back and have pondered over it ever since.

The rim, including the built-in flange, flared tone ring, and engraving, look very close to the design of the Leedy Solo-Tone, with one exception, namely that it isn't top-tension. Meanwhile, it has what is very clearly a Vega Professional neck, complete with the usual Vega inlay pattern, except that on the headstock it is inlayed "Solo-Tone".

The neck joint is a little weak and probably needs some work. I thought initially that it was some kind of parts banjo, but the headstock engraving and the Leedy-except-not-top-tension rim lead me to another working hypothesis. Namely, could it be some kind of prototype?

All the (limited) information I can find on Leedy indicates that they settled on basically one design and then produced various cosmetic variants on it throughout the 1920s. I haven't found any references to an earlier run using Vega necks. However, I can imagine that while they were designing and tooling up they might have put Vega necks on prototype rims to experiment.

Are there any Leedy experts out there who can confirm if they made a run of banjos like this one, or who might have other information or hypotheses that could shed light on this banjo's provenance? 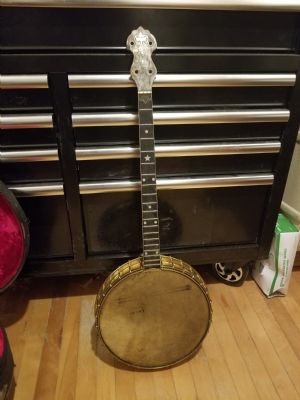 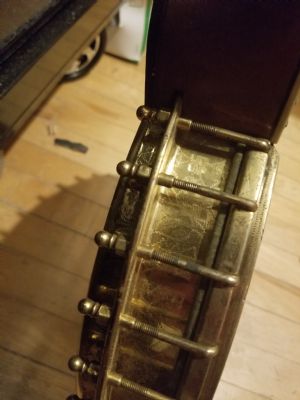 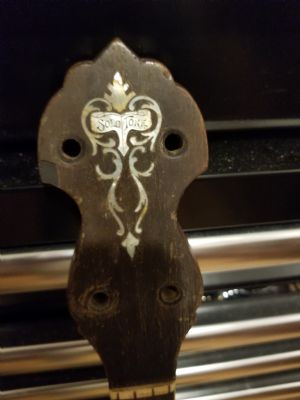 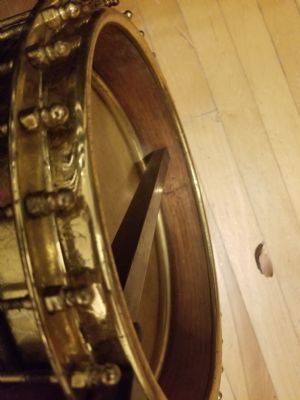 Interesting that the peghead shape and vine inlay is the same as a Vegaphone Professional, with the addition of the "solo tone" inlay. I would definitely need to see it in person to figure out what is going on.

Yeah, it's a strange one.

Indeed, I've had my hands on quite a few Vega tenor necks and I can confirm that everything except the Solo-Tone engraving and the heel cut for the flange is exactly the same as a 19-fret Vegaphone Professional neck from the mid-twenties.

Note also that the nuts actually reach up around the hooks, just like the nuts on the top tension Leedy's, except that at the top the hooks are regular J-hooks and the tension hoop, though engraved like the rest of the rim, is essentially a standard grooved tension hoop.

P.S. I can find no indication that it ever had a resonator.

I think this is a parts banjo. Leedy pot that lost its brackets, tension hoop, and resonator made complte with a Vega neck.

As Bob Smakula says, though, seeing it in person would be the best way to try to figure it out.

If it's from parts, the person responsible was pretty clever.

The solo-tone inlay certainly does not match the rest of the conventional Vega inlay on the peghead.

I think this is a parts banjo. Leedy pot that lost its brackets, tension hoop, and resonator made complte with a Vega neck.

As Bob Smakula says, though, seeing it in person would be the best way to try to figure it out.

If it's from parts, the person responsible was pretty clever.

Yeah, that's definitely possible. They'd have to find a matching engraved tension hoop, but I guess those are around.

The engraving pattern on the rim is also different from the standard Solo-Tone patterns I see in all the photos of Solo-Tones I can find.

The pearl looks different for the Solo-Tone inlay, so I bet this is a Vega neck.

The pearl looks different for the Solo-Tone inlay, so I bet this is a Vega neck.

There's absolutely no doubt that it's a Vegaphone Professional neck. For that reason alone, the missing inlay should be easy to replace.

The question is when in 1924 or so, Leedy decided to get into banjo production, the first one or few had this (these?) Vegaphone necks.

Though one wants to laugh this off as a Frankenbanjo, the fact is that the Leedy Drom Co. may indeed have fitted a Vega neck to one or more during the prototype stage. Unless Ludwig has detailed Leedy records in storage, it's probable that we'll never know.

There are a few of us who could make an educated guess one way or tthe other with the banjo in hand. Still a guess. however...

Vega did sell parts, so it would not surprise me if Leedy bought the neck from Vega, added the Solotone inlay and stuck it on their rim.

Or it could be a parts banjo. We'll never know.

Maybe a few more photos or other information would help, such as neck attachment hardware, dowelstick markings--if there are any--and a closeup of the neck heel-to-rim fit. A closer comparson of the engraving of the tone ring with the engraving of the rim cladding might also help.

Maybe a few more photos or other information would help, such as neck attachment hardware, dowelstick markings--if there are any--and a closeup of the neck heel-to-rim fit. A closer comparson of the engraving of the tone ring with the engraving of the rim cladding might also help.

I've attached a few more photos including the neck attachment hardware, the heel cut, and a couple pictures of the engraving pattern. Sorry for the wait.

The heel has split along the lamination, as sometimes happens on old vega necks. The dowel was reinforced with a pin or screw through the heel at some point (maybe from the beginning, maybe along the way to now). I think the cut for the flange may have contributed to the failure of the neck heel.

The inlay pattern on the rim is a repeating floral pattern, unlike the more geometric pattern I find on most Leedys.

As on other Leedys I've seen, there are no markings on the dowel stick.

Where the dowel stick meets the rim there is no mini-ferrule (reaches around in short semi-circles on each side of the dowel stick in pictures I've seen), though not knowing how this was usually attached I suppose it could have been lost. 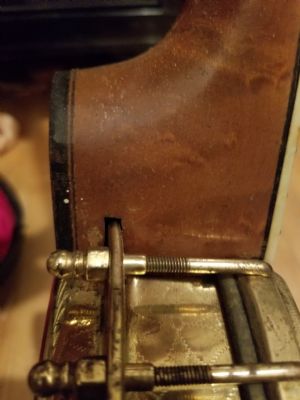 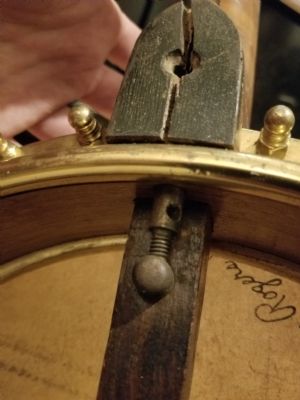 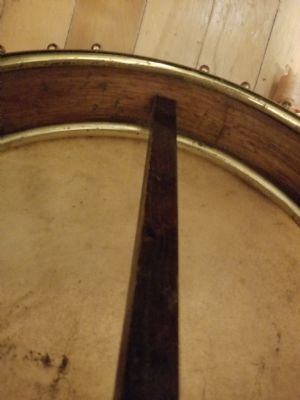 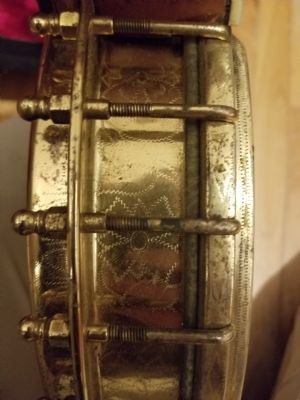 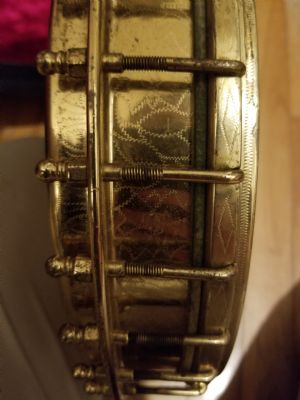 As for the split neck heel, it's my opinion that the split was due to a flat head screw being use to attach the dowelstick. That could indicate that somewhere along the line, the Vega neck was added to the Leedy pot, and not by the factory. I suspect that Leedy engineers would have a better way of attaching a dowelstick to a neck heel. This "screw through the heel attachment method is strictly amateur work.

Of course, it's possible that the Vega neck simply came loose from the dowelstick and some later owner fixed it badly, but I have doubts.


One other thing to consider is that if this banjo happened to be a prototype, how and why did it leave the factory? A complete pot could have had a real Leedy neck installed after testing was done.

'Does this Gibson look like a decent deal? ' 8 hrs

'Has anyone purchased this item from eBay?' 9 hrs