What do I have here? (Hypothesis: Washburn Improved?)

This is the first of a couple of posts I've been meaning to make to ask for some more information about a couple of banjos I have lying around.

I originally bought this one because it seemed like a good price on a nice looking spun rim. Getting it home I noticed it has a sort of Curtis-Electric-esque tone ring with a large round rod suspended over what appear to be screws.

So here are my thoughts so far:

-The headstock is sort of S. S. Stewart shaped, but not quite. I know several other makers used this shape in the early 20th century. Washburn used this shape, except with a point instead of a rounded tip, at least in the examples I've seen either in person or online.

-The tone ring looks like a match for the Washburn "Improved" tone ring (patent here), especially given the large diameter of the round rod. However, the specimens I can find online, and in the patent image, all have much taller supporting posts. Maybe it's a variant? Maybe a previous owner swapped out the taller posts for the current round-head screws for some reason?

- The rest of the overall design, including the hardware (the shoes, and the tension bracket which is Vega-like but has a different shaped cut-out for the screw that matches the one on a Washburn Style C that I have), seem like a pretty close match for a Washburn.

So basically, my hypothesis is that this is a Washburn Improved, maybe with a variant or owner-altered tone ring. I happen to have an orphaned 1920s 5-string Washburn neck that I'm inclined to fit to it.

I'm sending this out in hopes that some of the knowledgeable folks here can chime in to let me know if I am on the right track.

Thanks to all for reading this.

EDIT: P.S. There are no maker's marks I can find anywhere on the banjo, except an assembly number "2" stamped on the rim above the hole for the dowel stick. 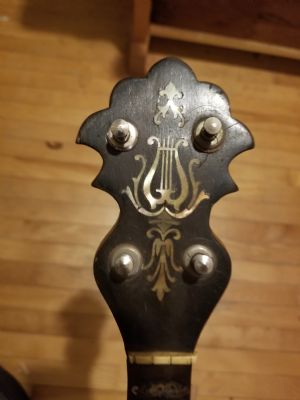 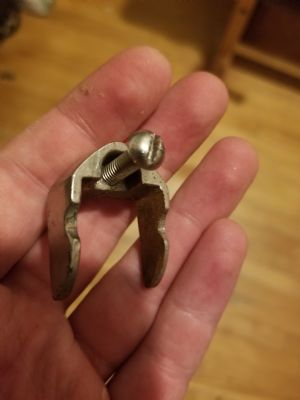 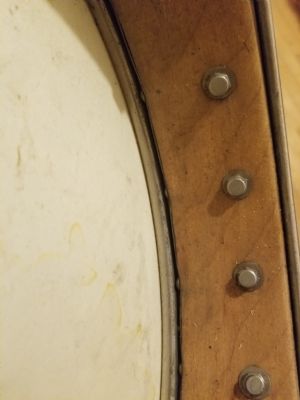 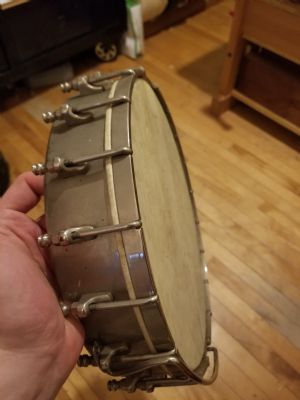 Thanks Andy! Having found some pictures you're absolutely right, this is clearly a Morrison banjo. Being a tenor, I assume it must be one of the later ones.

Andy beat me to the punch but that headstock was screaming R&L to me. Then I saw the pot.

Last one of those I owned was a rescue from the San Jose Guitar Center that I obtained for $90. It's been gracing folk music gigs around Salt Lake City for 30+ years since I restored it.

'Does this Gibson look like a decent deal? ' 7 hrs

'Has anyone purchased this item from eBay?' 8 hrs