After seeing Johhnycake Whiteâs post about Ludwig rims, I just gotta have one.

Where can these be found?

If you are talking about the two piece cast bronze rims I have two of them which are gold plated, and very pretty.

PM me if you want one, I will sell for what I have in them.

One of them may be haunted. 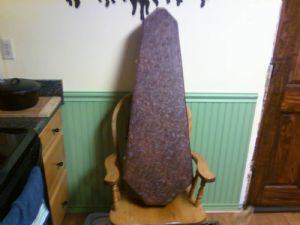 Quickstep asked me about the "may be haunted" comment.

I enjoyed retelling the story so much I decided to post it here for entertainment purposes, I don't expect most to believe it, but I am being serious.

The ghost story is this:

I didn't believe in things like this before this happened to me, but this is what happened.

I bought those two rims off Ebay, and it was coming up toward Christmas time. My wife was preparing to send some stuff to Germany for two of our grandchildren and had been boxing stuff up a little before the first package arrived. This one was the gold plated rim, and I reckon you know these were high end banjos made during the Jazz era, which I think may have something to do with this.

Anyway, I opened the box and removed the rim. It had been packed with those little styrofoam peanuts, and I saw my wife walk up to the bar out of the corner of my eye just as plain as day. So, I asked her "Do you want this stuff for your packages?" When I got no answer I turned and saw a smiling, and very pretty woman about the same size and build as Marena, but it was not her and then the woman was just gone.

My wife stepped out of the other room and asked "Who were you talking to?" and it took a few moments for me to get over the willies enough to tell her.

That wasn't the only strange thing that happened. My wife records me playing banjo with her phone a lot, and for the next two months every time she recorded me playing there would be this round ball of bright light literally dancing around me. Something we never saw with our own eyes, just on the videos.

Then my younger brother was over for Christmas dinner. After we ate he was asking me about inlay tools and materials so we went down to the shop, I gave him a few tools off the rack, and opened up a little wooden box I keep inlay materials in so he could pick out a few pieces to practice with. I left the box on the bench and we went back upstairs. I couldn't find that box when I went back down to the shop next day. Didn't see it again for two or three weeks even though I looked all over the shop. Then I got that gold banjo rim off the shelf and there was that box sitting inside it.

You can believe it or not, but that is the way it happened. We never felt any kind of bad feelings about it, and I like to think she was a Jazz musician with some attachment to her banjo and may have been bothered it was parted out and sold.

That was a few years ago, and nothing weird has happened since, but I will never forget my encounter with this unexplained mystery.

Perhaps the Ludwig pots I have are not the same as was being asked about.

Both of mine are from Ludwig "Ambassador" tenor banjos from the 1920s. This was the top of their line I believe, and these make a really nice sounding banjo. Dan Daybreak's "Cujo" banjo was based on one of these pots.

I've made two Ludwig conversions. One open back and one resonator. Ludwig never made a 5 string banjo. And they only made four stringed banjos for about five years. A friend of mine had a Ludwig conversion that I always admired, and I eventually made two of them. I found the first tenor banjo at a local flea market for $100. I bought the second banjo from a local Guitar Center for $400. Not exactly cheap, but you can spend way more than that for a good tone ring. And the doner Ludwigs gave me tone rings, rims, tuners and a flange. I saved the unaltered original necks in case anyone wanted to return it to stock. Which I doubt will ever happen. Both had excellent sound. All were Capitol models. The high-end Ludwigs had pot metal tension hoops, and many are deteriorating. The lower-priced Capitols had brass tone rings and should last forever.
DD