I'm trying to get some information on this Banjo. It was left to me by my grandfather who used it in the mummers day string bands. The serial number inside is 32368. Any help would be appreciated.

Going by Polle Flaunoe's data base your banjo was made in 1932.
The Senorita was Bacon Banjo Company's lowest priced of their high end banjos. Introduced in 1931, they were made with pearloid fingerboard and peg head overlays etched with Aztec design fret markers instead of pearl inlays. That design was used to compete with Gibson's Style 11 banjos which also used pearloid plastic overlays and were introduced the year before.
Most were tenor banjos but I have seen a few five string models. They probably made the Senorita in plectrum style as well but I have never actually seen one.
Bacon Banjo Co. made banjos marked Bacon as well as the B & D(Bacon & Day) banjos which were their higher end instruments although the company made several high end banjos marked Bacon as well.
B & D stood for Fred Bacon and David Day. David Day left Vega Banjo Co. and started to work for Fred Bacon in 1922.
I think all that is accurate and I hope it made sense.

Mark - some indeed fine remarks by you - here are some additional/correctional infos:

This model started its life as a private-labeled one - designed and built for Progressive Music Co. in New York - and getting PMC´s own universal brand GORDON. It was manufactured in the period 1928-34 - appr. 250 examples were made. So its design/construction does in fact pre-date the GIBSON Style 11 as mentioned by you.

By 1930 Bacon introduced it as one of their own models as well - the B&D SENORITA.

During the 30s the model was used as the basis for many other private-labeled examples - due to the depression banjo sales were really really low during that decade - by labeling the model differently for various music schools, associations, music stores etc. Bacon found/created a sort of niche in the industry - thanks to this they managed keeping up a production of banjos somewhat over average.

OP - the serial number at yours can be somewhat tricky - after WW II and the take-over in 1940 of the Bacon brands etc. Gretsch continued building Senorita´s. They used a number of somewhat confusing SN sequences - often making it hard/impossible dating their banjos.

If possible do post some pictures here - I/we can then tell which possibility is the correct one.

Thanks for all the info. I took some quick photos to help with identification. Does this model sell easily? 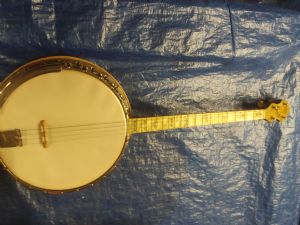 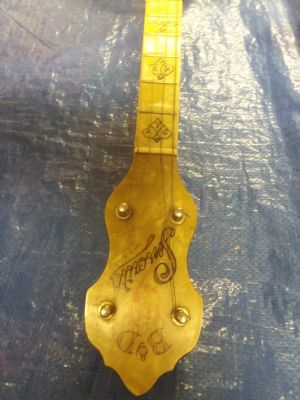 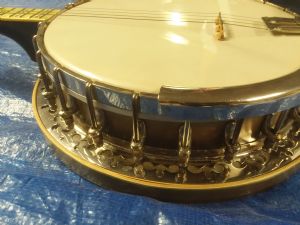 It appears to have been made by Bacon Banjo Co. rather than Gretsch.
Does it sell easily? I really don't know the answer but I do know that Bacon banjos are well respected and well liked by jazz musicians. They ranked right up there with many of the other top banjo brands in their day.
Maybe Polle will chime in again after he sees the pictures. He is a recognized expert on Bacon banjos.

Yes - Mark, you´re right - from the pictures it seems to be a genuine 1932 B&D Senorita - made by the Bacon Banjo Co. in Groton, Conn..  I´ll include it in my databases.

And - in spite of the blurry pics - it seems to be all-original and in excellent condition.

The demand these days seems indeed very low - but in spite of this it does in my experience appear that banjos in this class do keep the same price level as going for the last decade.

Only - the value for a banjo like this is IMHO far too low - considering its high quality construction and a fantastic performance once set up in the best possible way - they do normally sell in US for only $300-400.

I had one that was stolen in 1974. Somebody had engraved all the metal. 1932 was engraved on the tail piece.