As it is a tune from over the pond, The Session has several versions and some discussion about the rant dance step and the Morpeth Rant dance.     https://thesession.org/tunes/1310.

The Traditional Tune Archive says this:
“The composition is often attributed to William Shield (1748–1829), a popular 18th century musician and composer originally from Swalwell, near Gateshead, Northumberland. However, as Barry Callaghan (2007) and others have pointed out, Shield often appropriated traditional or folk melodies, and "Morpeth Rant" may not be original to him. The town of Morpeth is in Northumberland, a market center on the River Wansbeck serving the surrounding rural areas and the villages of the Northumbrian coalfield (Graham Dixon). It evolved around a Norman fortress called Morpeth Castle, one of several guarding the east coast routes to Scotland.”  It also provides a few more title options for those of you who don’t like to have to repeat “Morpeth” over and over when folks say, “What’s it called again?  Really?  That’s a weird title.”

Here is a google map of the city of Morpeth for your entertainment.  I suggest using the street view to drive around and get a feel for the place:  Morpeth, Northumberland     I saw a blue double decker bus with an ad for a Trolls movie on it.  Some of the faces on the ad were blurred - error on the safe side, eh google?

There are several youtubes with banjo along with a pile of fiddle versions.  Here's most of the banjo versions:

Josh Turknett from here on the Hangout.

And finally, here is my good friend and BHO member, Paul Perkins, playing banjo to the fiddle and uke track I supplied him for an email jam.

Paul can do it all and is playing three-finger here, probably melodic (I didn’t realize he wasn’t going to clawhammer and he's a teacher who was very busy the last couple of weeks, so I didn't make him do it over).  He’s provided TABs which I've attached.
Have fun with this one, I know I do!

Billy pig, considered to be the master of Northumbrian small pipes is on YouTube as well

I have seen Morris bands perform the tune at folk festivals. They seem to dance it as a slow hornpipe with the peculiar ârantâ step at particular junctures of the tune. The rant step allows all their bells etc to rattle emphasising the hop step. To me it is very similar to a hornpipe which has the tell tale data da daaaaa at the end of each part of the tune and the dotted rhythm throughout.

I could not access your video, but have this U. S. link to the same.

Love pipes, uilleann in particular, but they all are so emotive. I've always thought the Northumbrian small pipes sound like an old video game, then my wife just said, "what's that? It sounds electronic."

The Northumbrian small pipes are closed pipes so the notes are staccato. I think they have a lovely tone.

I had a set of pipes, which are electronic Uilleann pipes. No holes on chanter just sensor pads that figure if and how much of your fingers covered the holes. You could get all the effects of real Uilleann
Pipes by altering the bag settings plus you could play them in any key. Think I paid about £1200 for mine but the electronics went down in them and I couldn’t get them repaired.

incidently, the little boy playing with aeroplanes  while I was playing is my son who is now an exploration geologist working in Canada. Been over there a couple of years now. He hates the sound of Uilleann pipes, I can hardly blame him!

Nice choice and collab, Billy!  It's a relief to know that a rant is a dance step; the video with the dancers is much appreciated.

There is yet another nice version called "Nancy" by Annie and Mac which is said to be a 1920's dance tune.  Nancy was covered as a TOTW in 2008 and, in fact, was the first one on BHO (who seems to have the longest running record of TOTWs out of many you come across these days):  First TOTW, Nancy, 7/26/08.

Here’s Ken Perlman version off his album he made in the U.K. in the 1980’s He has it tabbed in one of his tutor books

heres my version I learnt based in Ken's tab but considerably slower.

Ken Perlman has 2 versions......one called the Morpeth rant in his book melodic clawhammer banjo, published in New York in1979 )oak publications) page 66 where he describes it as a hornpipe and can be played with a dotted rhythm or straight. He gives credit to his source as coleâs one thousand fiddle tunes and says it is a dance that is danced for this tune.
In his other book, The 5 string , or G banjo printed in 1987 he lists Nancy which does sound similar with an acknowledgement to the Northumbrian pipers society.
The tunes are very similar but I think different.

Here are different tabs for Nancy and Morpeth rant 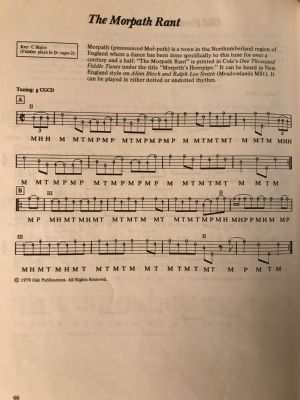 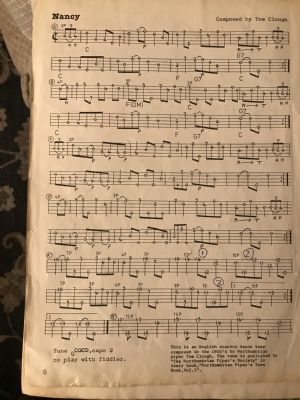 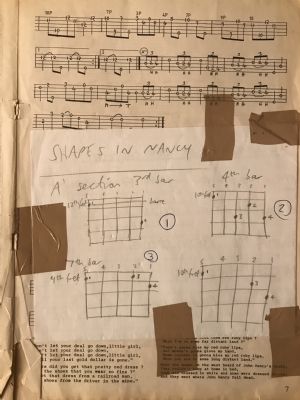 I don't think this piper has a lung, limb, joint or digit that isn't simultaneously in action. That's a full body work-out!

A tab for Morpeth Rant can also be found on page 78 of Mel Bay's Frailing the 5-String Banjo by Muller and Koehler. It's in eCGBD tuning. 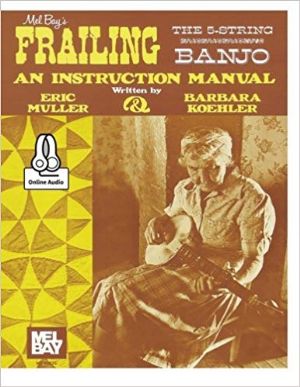