Picked up this 1963 Ode Longneck for my husband and he really enjoys it.
It needs some minor TLC -- the 5th string tuner is touchy and the other tuners stay in tune, but feel loose. Any advice on how to address the tuners?
Comparing to the picture in the catalog, I am guessing the tailpiece is not original?
Any other details good/bad appreciated.
Tanya from Ome confirmed it is a letter from her father and thought the package was a "rare find" -- I appreciated the validation having purchased it from a shop that knew nothing about banjos. The price wasn't bad, so I took the chance. 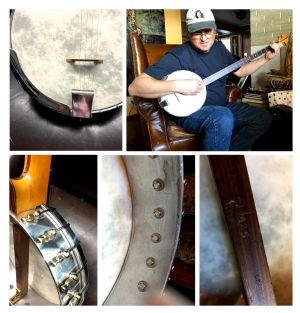 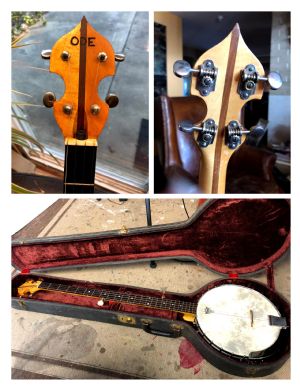 Ed Britt and Mike Stanger are the BHO guys to talk to about Ode longneck banjos. They know everything on the subject, are very helpful, and never condescending or dismissive even though they could be.
They are knowledgeable, helpful, and kind. Good guys indeed.

Your guess that the tailpiece is not original is right. It is a Kluson style which is not easy to string with loop end strings. Ball end strings are much easier to use if they can be found long enough to put on long neck banjos.

Hi Mollie https://www.banjohangout.org/my/Creativespirit! The tailpiece is absolutely original. The catalog is '63, but this is one of the last of the first ODE banjos. It was numbered and sold in '63, but it's a '61-'62. Please don't change a thing. : )) Here's the first catalog showing your banjo, and the tailpiece that's on yours: omebanjos.com/wp-content/uploa...-Best.pdf
The pot on these is a straight aluminum tube that the head sits on. This is Ogsbury's first design, and they're great! I almost bought this one and spoke with the seller. But, I have a '63, sandcast rim with a 52 hole "tone ring" and don't need two ODEs, as tempting as this one was. As far as the 5th string tuner, it might need a little tightening at the friction screw, just don't use grease or oil because these rely on friction to hold tuning and work perfect when you find the sweet spot between too loose and too tight. And, if you notice the tuner slipping in its mounting hole, gently remove it, add a smal drop of wood or white glue to the side of the hole, then replace the tuner and let it set up--though it probably just needs a little adjustment. Congrats! 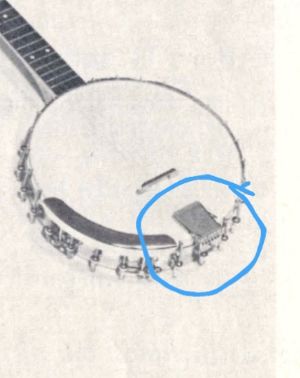 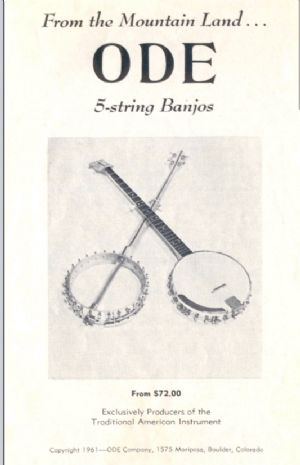 Regarding the loose tuners, the larger slotted screws go into the posts that the strings wind around. You might try tightening them a bit. The same with the 5th string tuner, the screw the goes through the plastic button might be a bit loose. You can tighten that one as well. Non-geared tuners, like the 5th string tuner, can be tough to keep in tune. A lot of times they are replaced with geared tuners.

35planar Thank you! This is welcome news. Thanks for the tuner tips and the catalog link -- I would not have thought about looking to the previous year.

Jbo1 Thanks for the tuner tips -- your description helps me visualize what is going on mechanically. On the 5th string, it feels like the plastic knob (what is that part called?) is moving on the screw before it starts to turn anything. Actually the others feel that way too. But it eventually will seat and turn the entire mechanism.

Tightening will help that kind of slipping.

I agree with 35planar that the tailpiece is original. I have Ode long neck #53 (one of the original batch of 100) - a 1961 Model 21which I acquired from the estate of the original owner who bought it at the Ode factory. It has the 6-string tailpiece (Elton) which is original to the banjo. Apparently before Chuck began producing Ode tailpieces these 6-string tailpieces were the first parts he used. Here's my blog link for my Ode: http://postcivilateum.blogspot.com/2013/

PS: I quit messing with the 5th tuner and went to a Waverly planetary 5th peg. I love it, and it looks good on the neck. Some guys dislike the Waverly because of the sring change method; but it is very stable and perfect for the job.

darwinyarwin #53 - nice!
The tailpiece being a 6-string did throw me when I first saw it.
Love the pics on your blog. Is that the original head? Sweet.
Mine came with a fiberskyn -- not sure that is the best match. It does tone it down a little.

Yes, banjohangout.org/my/Creativespirit, it's a Model 21, but equally very cool! They could be ordered with a calfskin or a mylar head. It's an important design that came to be because of the folk revival movement. In my tiny mind, the lineage goes back to the musicians, artists, documentary film makers, ethnomusicologists, and writers from the post WWII era: Harry Smith, Alan Lomax, Pete Seeger, the Weavers, Woody Guthrie, Leadbelly (d.'49), on and on, hundreds who were the bridge from pre and early radio, early record production and marketing, record collectors during the WWII shellac drive when much of the music in those early years was donated, ground, and melted for the war effort, through to the Lost Generation finding roots and hope in American culture...and so on. Without the "Folk Scare" 60's rock-n-roll would have sounded very different, and punk rock might not have ever existed. All of this is my humble opinion. That said, the ODE Model 21 is a great banjo. It's the obverse of a pre war Gibson Mastertone. : ))

Beautifully worded. Thank you for all your help. 35planar

'What do I have here? (Hypothesis: Washburn Improved?)' 3 min