I'm comfortable with different picking styles, but as I develop, I find that this mix of two-finger and frailing comes most natural. Recently, I've started to put a small piece of tape on the fifth string to deaden it a little bit, as there's a lot of fifth string when playing like this.

I don't know if other people have experimented with other ways of quieting that fifth string a bit? I'm sure other old time players who double-thumb have tried and I'd appreciate to learn from you other methods to achieve that. 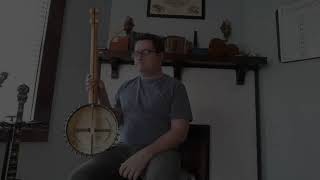 I've never done anything to my 5th string, but I do find myself deliberately playing the 5th louder or softer in different parts of a tune.

You might get more input on this if you ask the question on a regular clawhammer/oldtime thread.

I've sometimes wondered why nobody has ever adapted a Scruggs type tuner to the 5th string for those tunes that change keys between the A and B parts.

quote:Originally posted by Eric A

I've sometimes wondered why nobody has ever adapted a Scruggs type tuner to the 5th string for those tunes that change keys between the A and B parts.

I've recently placed one of Rickert's d-tuners on my fourth string in order to go from D to C. That said, I think the issue with putting one on the fifth string tuner would have to do with the ratio. Typical banjo tuners are 4:1, but the fifth string tuning ratio is higher. I know a Five Star fifth string has a 14:1 ratio.

I did just double-check. The Waverly Planetary fifth string tuner has a 4:1 ration, so you could work with one of those. That's an interesting idea.

'What do I have here? (Hypothesis: Leedy Prototype?)' 32 min

'What do I have here? (Hypothesis: Washburn Improved?)' 41 min