Couple of questions about Bacon banjos

Second question.... back in the early 1990s I briefly had another Bacon that I stupidly sold for a pittance because I did not know anything about banjos at all then. A dealer bought it and resold it for a much higher price. It was a 4-string, with a back cover/resonator, and very, very fancy, but without the pearloid and colorful lettering like most flashy high-end Bacons that I have subsequently seen. In other words, lots of decoration on its wood and metal parts, but no additional finish materials. Here's the thing... on the head, it was marked "Bacon & Day". Not "Bacon", not "B & D" and no additional model name. I remember this distinctly because I used to make fun of it and call it "Bacon and eggs" (shows how much I knew). I have never seen another Bacon with the company name spelled out like that. Unfortunately, this was long before digital photography and so I do not have any pics of it. But I often wonder what exactly did I have. Does this description ring a bell? 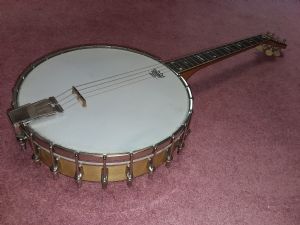 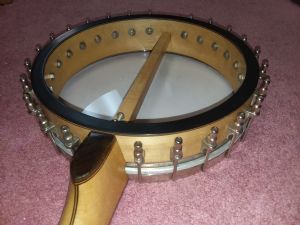 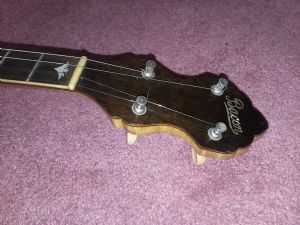 You appear to have a B Special missing its original resonator. Like many Bacons, the metal flange was attached to the resonator as one unit. Converting to open back took a few seconds.

Unfortunately, there aren't enough catalogs from enough years to pin it down further. I don't believe for a second that this is a 1924 catalog, for example:
https://acousticmusic.org/wp-content/uploads/2016/02/Bacon-1924-Catalog.pdf


My B Special plectrum did not have a letter stamp, either. It had a full resonator and was the loudest banjo I ever owned. Besides the chrome plate on mine, it had an original, chrome plated Waverly tailpiece instead of the Presto on yours. I suspect it might have been a bit later than yours. I horse-traded it to Marc Silber about 25 years ago for a Vega Tubaphone NO 3 plectrum. Still kicking myself for that. I loved the NO 3 but should have kept the B instead of trading it. 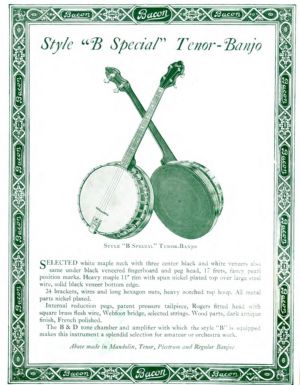 Mine was a blonde, same as the OP, with matching resonator. No letter stamp on the dowel, either. It was Marc Silber who told me what it was. Years later, I came across that catalog page.

Oops - crossing postings - I did btw. delete my first posting.

Bacon did back then market both a STYLE B and a STYLE B SPECIAL (the resonated version as pictured in the 1925 catalog).

Originally this model had a "dark antique finish" - inclusive of French polishing. The example shown above has most likely in the past been totally stripped and lacquered on top of the blond maple. Unless - it was custom ordered as-is - who knows. Otherwise its specs/looks are as shown in the 1925 catalog.

Regarding plating - Bacon did during the 20s and most of the 30s not use chrome plating - the only model ever made with a chrome plating is the very rare B&D Swing Silver Bell - as made 1937-39.

Regarding the Bacon & Day branded example - the rumor goes that a few custom examples were built - however during my many years of research I´ve never stumbled over an original example. Do also have in mind - numerous Bacon/B&D banjos have been altered, "up-graded", "decorated" etc. since their birth 80-100 years ago - LOL!

Second thoughts - by early/mid 1925 Bacon had heavily invested in modern machines and e.g. a spray booth.

Ab then did they - as most likely the first company in US - start spray lacquering their banjos - instead of using the labor-intensive French polishing.

Maybe that´s why some blond examples are to be found?

Thanks! So, a B Special then. Was this considered a mid-line Bacon model at the time? How are B Specials regarded today? What kind of music would it be most suitable for?

I do not think it was re-lacquered. I can usually spot a refin - most are sloppy enough to be noticeable. This finish looks original to me, unless it was refinished at the factory or professionally by a real pro when it was nearly new. It is in nearly mint condition, with original case and it still had the original Rogers calf head on it when I got it (I replaced it because it was broken, but I still have it). It looked like it sat in its case for fifty years, totally unmolested.

>> rumor goes that a few custom examples were built

Ouch... Yes, I've been kicking myself for 30 years now. I picked up that Bacon & Day for $15, sold it for $100 and thought I did real well. This was at a time when I just started repairing guitars. In those days I could pick up some Fender Mustang or a 1970s Les Paul at a flea market for like $100, fix it up, take it to a guitar show and get maybe $250. So a $85 profit on some weird old banjo seemed reasonable. If only it came along a year or two later, when I was a bit more experienced... Eventually I became interested in learning to play the banjo and got another Bacon (the B Special above). It's nice, but not as nice as that first one was.

Here is a Bacon & Day one that I owned.  It came straight though from the original owners family and was signed by both Fred J Bacon and David L Day in 1927.  Contrary to what was said above, yours would be the second one known to exist.

Also, you should review picture of banjos at:
http://banjoworld.de/Bacon1.htm
and let us know which your "unknown" model was.  I sounds like it could have been a Ne Plus Ultra. 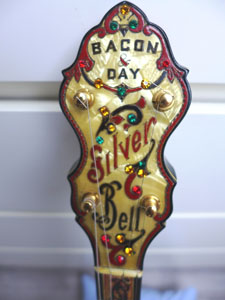 Second thoughts - by early/mid 1925 Bacon had heavily invested in modern machines and e.g. a spray booth.

Ab then did they - as most likely the first company in US - start spray lacquering their banjos - instead of using the labor-intensive French polishing.

Maybe that´s why some blond examples are to be found?

Perhaps. Being blonde with chrome plated hardware was its outstanding feature. I was well versed in guitar finishes and would have known it it had been a re-fin.

If I knew in 1994 (?) that many years later, I'd be talking about these, I'd have taken tons of pictures. As it is, I'm not positive on the dates other than I used it on some sessions in 1990–2 (only recordings I have of it) and that I used the Tubaphone that I traded it for in a show I did in 1995.

I sold the Waverly tailpiece about 10 years ago to another BHO member. I might have a picture of that somewhere. Again, I have no doubt about the chrome plate. It stuck out among my other vintage instruments and their nickel at the time.

Perhaps. Being blonde with chrome plated hardware was its outstanding feature. I was well versed in guitar finishes and would have known it it had been a re-fin.

Thanks - I´ll dig down in my extended database - I do somehow recall some other models also coming in blond non-cataloged versions in the mid 20s - this research could help determining the exact time for the introduction of spray lacquer.

Regarding plating - except for the late Swing SB model as mentioned I´ve never seen a Bacon/B&D model/example with an original chrome plating. All examples with a chrome plating seen by me so far had been re-plated in the past.

I looked at the banjoworld page and those are all just wow! So over-the-top flashy. Mine was not as fancy as that, it was a bit more understated, elegant rather than flashy. The closest I can find is the Silver Bell #5. It is the right color (a really dark sunburst) and the same circle pattern on the resonator. But mine did not have the carved heel, the gold plating or the vibrato handle. Same "f-hole" pattern on the resonator. Different headstock face panel, of course, and maybe fretboard inlays a little simpler, but I do not remember such little details anymore. 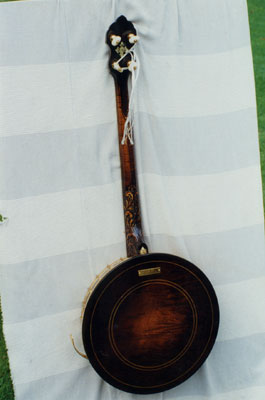 I recently sold a Bacon that looked almost identical, (I can`t be sure `cos I don`t have it in front of me now ) and that was an "Orchestra" model.

Thanks! So, a B Special then. Was this considered a mid-line Bacon model at the time? How are B Specials regarded today? What kind of music would it be most suitable for?


Any interest in a resonator? Gryphon Strings has one for sale including hardware.

Tell Richard I sent you.