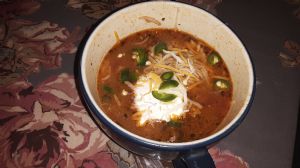 Nice !!! Love me chicken tortilla soup !!! So good and so easy and itâs a good eat out in da ice shack fishing !!!
Slammer!!!

Hoping yer ice shack has an outhouse, Dale. That Mex-Tex grub goes right through a person,, especially if washed down with backwoods U.P. hootch.

He hates turkey! This could change his mind.

Hoping yer ice shack has an outhouse, Dale. That Mex-Tex grub goes right through a person,, especially if washed down with backwoods U.P. hootch.

How do you think he makes the holes in the ice Chuck?

Hey now, dat Hannity thing is pretty damn funny...............as long as your not a Yooper!!!
LMAO. Had not heard bout dat. The U.P. Is a Country that a lot of people are confused about..............mainly Canadians. I think itâs because we intimidate the hell out of them and they know at any moment the U.P. Could take back Canada and claim it once again . When we decided to let our neighbors to da north become their own nation and leased the land to them (and the 49 1/2 states to da south for that matter)
for da price of........a beautiful oversized cedar sauna , some nice tire chains, and snow scoops for every man, woman and child in da U.P.. Wow, they never balked once, even knowin they were gettin a raw deal eh !!! We even offered to trow in da original Pasty recipe and dey turned it down because Dey taught da word Rutabega was offensive. Look whoâs laughing now as da U.P. eats and sells more pasties den any other place on da face of dis here earth!!!
Besides being a sovereign nation, we also own most of da fresh water supply other than Lake Ontario (which da fishing ainât great anyways) !!!
You can say what ya want bout us Yoopers, but push come to shove, and youâll not find nicer ice shacks than ours and youâll never hear a Yooper complain dat da ice is toothick!!!
So when Iâm sitting in my nice toasty shack pullin up da biggest perch , walleyes and lawyers ya ever seen slurpin down some nice hot Chicken (not Turkey) tortilla soup and washin it all down wit Yooper Hootch, donât come cryin ta me !!!
Say ya to da U.P. Eh !!!
Slammer!!!
Awe hell, yer all invited !!!

Could you say that again, but more slowly please ?

Huh...? "Pasties" means sumpin else north of the Mackinac Strait,,, used to see them in strip joints in the Soo, Ontario. ;-)

I believe that there are 5 races of wild turkey in North America.
I expect that they all taste much unlike a domestic bird.

Field & Stream magazine keeps a special corner for people who can prove
that they have bagged them all.

Yes Chuck, the word Pasties has a few different meanings and we Yoopers like em both!!!
Although the Pasties your referring to here in da U.P. are made of red flannel and have a Stormy Kramer label on them to keep our women folk warm as to not poke an eye out !!! Years ago when I worked in the Soo , Mi. , my buddy took me over the bridge for an evening at one of the establishments you refer to, and when stopped at the bridge we were asked to state our purpose. We said âentertainment â and the border guards laughed and let us pass. On the way home we got the same guards and asked if we had anything to declare. We thought for a moment and told them the only thing we had to declare was âmemories and a couple pasties to which he replied, â I donât even want to know, have a safe trip homeâ
Nice guys and very understanding!!!
Slammer!!!

Half of my Dark 'n' Stormy just shot out my nose. Once this nonsense is over, Al, you owe me big time.

Love you man… And God bless the divine St. Liz.

'I Had a Strike and selling my Collection mostly banjos!' 2 hrs