When looking at a reissue Gibson banjo, ie an RB3, Granada, etc and all you have is a complete banjo and all you can do is pull the resonator off for a look-see inside the pot...

Is there a list somewhere of serial numbers vs years and if not, does the serial number reveal the year? If so, how do you read it?

What years were each model made? For example, there is the RB3 with leaves and bow inlay, RB3 with a wreath inlay and I gather a few RB3âs with flying eagle inlay on the fingerboard. What years were these made, did they overlap in production? Is there a list of some sort somewhere showing years when the RB3, 4, 75, Granadaâs, etc were made?

Youâve got the resonator off, how can you visually tell if the tone-ring is a Kluesh, mystery or Crowe?

Any other identifiers one should look for when identifying a reissue Gibson banjo?

Why did Gibson continue with the RB250 when they came out with the RB3 with leaves and bow inlay?

Iâve seen pdfâs online of prewar Gibson banjo brochures and later banjos up to the 70âs. Are there any PDF brochures on the internet or on the BHO showing these reissues?

Thanks in advance for any sage info!

The questions you are asking at this point could fill a book.

There are dozens and dozens of threads here that address all these questions.

If you search each of your questions individually, you will get a lot of answers and gain a good deal of knowledge.

Now to others to also answer...

Gibson's website has serial decoders for many of its later instruments. There are other resources such as the Blue Book of Guitar Values. Banjophiles, Greg Earnest's site, Joe Spann's book, which deal mostly with pre-war Gibsons.

The reissues are commonly identified with the "Greg Rich era" at Gibson. It was a well-needed effort to return some quality banjos to the Gibson stable.

The RB-250 became the workhorse of the line from the 50's up to the 70's. Gibson has had many corporate changes since WWII. In the early 70's the quality of the instruments took a downward turn, commonly called the Norlin era. Norlin is a diversified holding company that sought to consolidate the Gibson musical instrument company with a variety of other "music-related" companies under a "music division." The quality of Gibson instruments remained in decline. In 1988 Greg Rich was hired and the quality of the banjos improved, featuring the re-introduction of many of the legacy models. With other collaborators such as Doug Hutchens, Gibson banjos offered many buyer what they wanted.

As to why they kept the RB-250, I don't know. Perhaps Doug and Greg can answer that. But, they did revert to the one-piece flange and rim configuration(vs the 2-piece flange and multi-ply rim of the 70's) and it was the basic Mastertone offering at a price point less than the re-issues. While it retained the inlay pattern, the RB-250 lacked the detailing of the RB-3. I think they would have been better-served by returning to the bow-tie 250.

I think the term ''reissue'' could be somewhat confusing. When Gibson implemented the reissue series of banjos it did two things:

The other thing was what I call ''Bling,'' where some of the old inlays, binding, engraving, plating, etc. were reintroduced. Maybe not exact in all cases, but very close.

The Mastertone series shared the same components for the (Rich era) reissue series. The base RB250 shared the same rim, tone ring and some other components as the RB3, RB4, and Granada. The difference was in wood type, peghead shape and bling. I remember Janet Davis explaining this to me when I was buying a banjo from her in 1993.

The Mastertones shared the same components, but differed in wood and bling. Later on, there were some differences, such as the Crowe ring, Mystery ring, and maybe a couple of others, that made slight differences from the original Rich era reissues, which used the Kulesh ring, but were still good banjos.

Others may have more specific data.

Standard "leaves and bows"
Reno style, with "leaves and bows" peghead but Flying Eagle fingerboard
"Double Flying Eagle" both peghead and fingerboard used Flying Eagle inlay as appeared on post 1929 some RB 4s and Granadas
Wreath
At least one RB 3 was made in standard Hearts & Flowers. I haven't seen it, but it was reported after I posted this photo of the other 4 inlay patterns that met at a NY Catskills jam weekend. 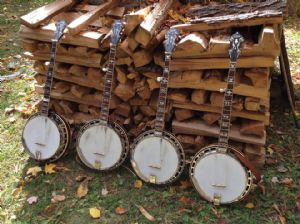 Thanks everyone for your replies - much appreciated!!!!

'The Wind that Shakes the Barley' 7 hrs