I'm new to the community and start my first post with some questions I have on this "somewhat of a heirloom" tenor banjo.
I'll briefly go over the things that I know so far. Then, I'll mention the questions that I would be grateful if someone could answer.

My father dug this thing out of hiding after I mentioned I was considering learning banjo.
Its a 1968 Kasuga tenor that belonged to my grandfather who played in a folk band most of his adult life.

-----This is what I know so far:
-The Kasuga factory was a big manufacturer of instruments in Japan, but went belly up in the mid 90's. Apparently they made stuff for various companies, mostly just slapping different logos on the headstock
-The build quality is exceptional. I'm a guitar player, this thing is on par with some mid-tier Martin, Gretsch and Gibsons I own.
-Two inlays have started to lift from the fret board
-It has exposed holes from replaced tuners
-Open G string rattles/touches the 1st fret (gone when G string is fretted)

-----As a "non banjo guy" I naturally have some questions. Any input from the community would be appreciated towards the following:
1) Should I spend money to get the inlays and fret buzzing fixed? Or am I better off buying something like a Goldtone CC and just holding the
Kasuga as a keepsake?
2) Where should I go to get the inlays re-set? ie. would a Guitar Center/Long & McQuade suffice? Or is a specialized luthier the safer bet?
3) How are Kasuga's regarded in the player community? Anyone played one before? I read they made instruments for Epiphone at one point.
Could this be roughly equivalent to an Epiphone Les Paul in guitar terms (quality, desirability, sound...etc)?
4) The Headstock appears to match a 1928 Gibson TB-3, do you figure this is what Kasuga was replicating?
5) Can anyone provide a ballpark estimate on the instrument's value? What would you pay for it?
6) Any other input/advice would be greatly appreciated!! Thanks!! 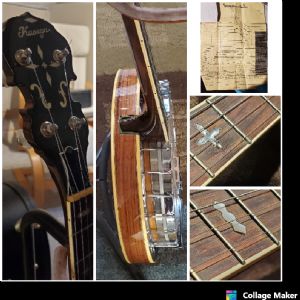 Nice looking banjo. I think you should keep that banjo and play it. Both items you mention are very easy fixes that you can do yourself.

The inlays just need a little glue put under them and clamped.

As far as the buzzing string - (assuming you have the correct gauge strings) - might have the nut slot cut too low. You can test that by just putting a small piece of cardboard under the string at the nut and see if the buzz goes away. If it does - you can just leave the cardboard or use baking soda and superglue to fill in the slot a little bit.

It looks like your banjo has 19 frets so usually that would take Irish tenor strings and tuned GDAE.

Most jazz-tuned tenor banjos are also 19-frets, tuned CGDA… You can use standard-jazz tuning and Irish tuning on both 17- en 19-frets tenor banjos.

If the head hasnât been tightened in years you might fix the string buzz by tightening it to the proper tension.

Never, ever, ever take a banjo to Guitar Center! (I wouldn't even take a guitar to that place.)

I don't know how the chain stores in Canada are operated, but Guitar Center in the US does not hire qualified repair people.

My recommendation for fretwork and inlay repair would be to find an independent repair person. If there is a decent guitar builder in your area, they would certainly be qualified to handle the job. And if you are near Toronto, Folkway Music has a qualified repair person.

1) Should I spend money to get the inlays and fret buzzing fixed? Or am I better off buying something like a Goldtone CC and just holding the
Kasuga as a keepsake? The inlays are likely pearlized plastic and you can glue them back in with superglue. As far as fretwork, you should have the banjo set-up by a knowledgeable banjo mechanic, NOT Guitar Center or similar place,UNLESS you are sure they have a knowledgeable banjo mechanic. I think buying a CC would be a lateral move. The Kasuga should be repairable for less than the cost of a Gold Tone CC
2) Where should I go to get the inlays re-set? ie. would a Guitar Center/Long & McQuade suffice? Or is a specialized luthier the safer bet? Do it yourself(see above)
3) How are Kasuga's regarded in the player community? Anyone played one before? I read they made instruments for Epiphone at one point.As you pointed out, Kasuga would put any name on the banjo as requested by the importer/distributor. Kasuga banjos are considered an intermediate-grade instrument. I have bought and sold many of these over the years.They were another attempt to capitalize on the Mastertone-style banjo when Gibson's quality was spiraling down in the 70's. A typical price-point banjo, with decent quality but not pro-level.
Could this be roughly equivalent to an Epiphone Les Paul in guitar terms (quality, desirability, sound...etc)? apples and oranges. (see above). I have an EPI LP and it would be closer to a Gibson LP than the Kasuga would be to a Gibson tenor banjo
4) The Headstock appears to match a 1928 Gibson TB-3, do you figure this is what Kasuga was replicating? Yes. This was atypical,as most of the early ones had a stylized headstock and most had bow-tie inlays.

5) Can anyone provide a ballpark estimate on the instrument's value? What would you pay for it? I have never paid more than $200 for a Kasuga-made 5-string. There are some tenors offered for sale in the $400 range, but they likely will not sell for that.
6) Any other input/advice would be greatly appreciated!! Thanks!! These banjos usually have a crude multi-ply rim and the tone rings are probably some sort of white metal(pot metal) but they sometimes had an bronze/brass alloy, A good rim is a first upgrade I would recommend, but would have to be evaluated on a cost/benefit basis. To put a $300 rim-replacement job into a mid-quality banjo, will not add that much(if anything) to resale value.

That appears to be a quite well made Japanese "Masterclone", meaning it's a detailed knock off of the Gibson Mastertone TB-250 of the 1970s, which would have had the same inlay pattern on peghead and fingerboard.

If you want to play tenor banjo, I think you should stick with this one, it looks quite good to me. You should ask around and find a banjo friend who can diagnose the buzzing "G" string (which string is that number-wise?). All the suggestions are good, like being sure the head is tight, the nut slot is not too deep.

The extra holes you mention about the tuners must be visible on the BACK side of the peghead??? If so, just ignore them, they don't need any repair or filling. It just means the original tuners on the banjo had fastening screws that the current tuners don't use.

By all means get a proper set of tenor banjo strings on it before you start adjusting the nut. Proper gauge, tuned to the proper pitch.

As far as being equal quality to an Asian Epiphone Les Paul, yes it probably is. Due to its age, it might even be better. Current Asian Epi Les Pauls don't come from Japan AFAIK. Probably China or Korea instead. All the Asian instruments come in a huge variety of quality levels, then and now. I believe you have one of the very good ones there.

As far as $$ value it's very hard to say.  I doubt it has held its value against inflation of the CDN dollar.  The market for tenor banjos is so tiny now, that you might be disappointed to learn what a tenor player might be willing to pay for it.

Have fun with it.

The inlays can be reglued. It is not that simple but any one can do it who has been given the proper procedure. First, always do a dry run. That is, try the procedure you are using without glue to make sure it will work. Use thin superglue, not the regular stuff. Thin superglue cannot be purchased at your local hardware store. It is available from wood working stores and online dealers. Many of us use paste wax to cover the fingerboard around the inlay so that glue does not get into it. Being very careful not to get the paste wax into the cavity. The paste wax can then be cleaned up after the glue up with naptha or goo-gone.

Might think again about leaving grandpas banjo with these folks.

'The Wind that Shakes the Barley' 8 hrs