Hello, I recently acquired this banjolele, itâs head was ripped, and it was missing its pegs, but other than that itâs sound. Iâve replaced the hide, and have vintage tuning pegs..pictured below, and made a (almost finished) bridge for it. The item that I am mulling over is the color of the peg head. It was originally painted black, but gouged and scratched terribly, so I removed the paint. I have put a few coats of French Polish on the back of the neck, and pot. Black is such a mundane color...and I never intend to sell it. Although I have ivory colored peg heads in the photo, I also have orange (amber) colored ones. I was wondering is there any reason to repaint the peghead black...or am I committing sacrilege of some unforgivable nature to paint it red or ivory, and perhaps paint a star, or my family coat of arms, or some other such decoration on the peghead? 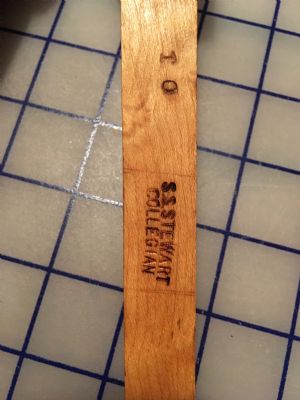 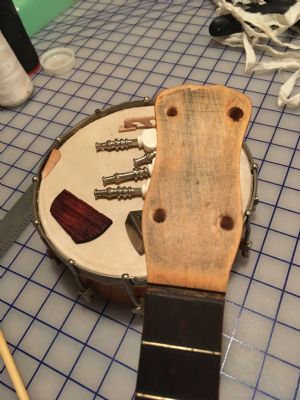 In words of a famous philosopher, "It's your banjo. Paint it any color (or not) that you want!"

Iâm also in the process of making a bone nut...it should be finished tomorrow.

Your banjo uke was made during the 1920's by Slingerland for Buegeleisen and Jacobson, also known as B&J, a music distributor in New York City. B&J was one of a progression of owners of the S.S. Stewart name after SSS died in 1898 . B&J had various instrument manufacturers produce banjos, mandolins, and guitars with the S.S. Stewart brand. Some Stewart banjos were even made by Gibson.

Bob Smakula thank you for that bit of info!

My feeling is, if it's not a rare collector's item, just go for it. I've got a 1930s Slingerland May Bell banjo that is going to lose its pearloid peghead overlay and damaged May Bell logo and get curly maple veneer instead. They made zillions of them, I'm not planning to sell it, and it won't be particularly valuable either way. But it will look better than it does now and thereby make me happy.

A red peghead? I'm putting in a call to the banjo police!

'The Wind that Shakes the Barley' 7 hrs