I've owned a couple of banjos with factory designed neck angle adjusters made before the truss rod era. One manufacturer was Kay with the patented shim concept ca. 1931 (attached). Another was a 1924 Gretsch Orchestrella (attached). Were there other manufacturers that tackled the neck adjustment issue and how did they do it? 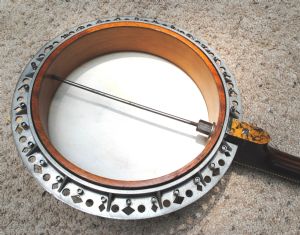 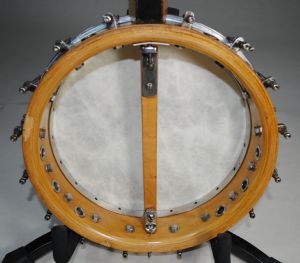 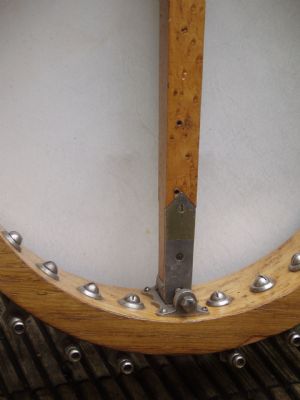 That Kay system was actually used on guitars and mandolins starting around 1928. While it does nothing to keep the necks straight, it's one of the few angle adjustment systems for guitar that still works nearly a century later.

Leedy had a system that didn't provide a huge range of movement but did actually move the neck a bit and keep it in place. It used a clock-key mechanism with the key inserted through the heel and there was a pivot bearing running through the neck:

Epiphone used a variety of neck attachment systems ranging from no dowell at all to a true coordinator rod. Most appear to be slightly adjustible if you add shims in the right places: Even though I don't care for Kay banjos I think their neck adjustment was probably the best one ever made. Might be one of the only adjusters that doesn't also require some type of shim. I am surprised it isn't copied more today.

As for Kay, they did, in fact, use what could be called a shim: the curved plate between neck and rim. While a good idea, I think the Kay adjuster could have stood some improvement in the way the rim rod was connected to the neck heel (a wood screw through an eye bolt doesn't cut the mustard in my opinion, and that screw almost always bends). At least it maintained a close fit between the neck and rim and put no strain on either. Most of the other systems adjusted one end only, di nothing to maintain the fit of the neck to the rim, and could put undue strain on parts if adjusted too aggressively. That's one of the reasons for so many split heels on Paramount banjos.

One should also not forget the adjuster proposed by former Hangout member Rudy, which was not a flush heel contacting the rim, but more like a through-the-rim set-up that pivoted on the edge of a cutout in said rim.

Yes, I found a Paramount Style 1 ca. 1930 with a neck adjustment design. 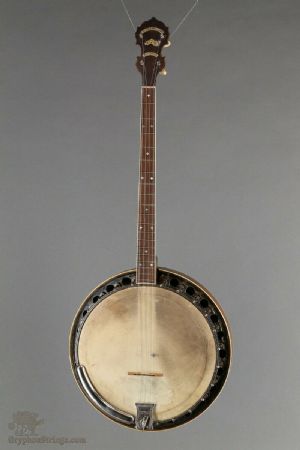 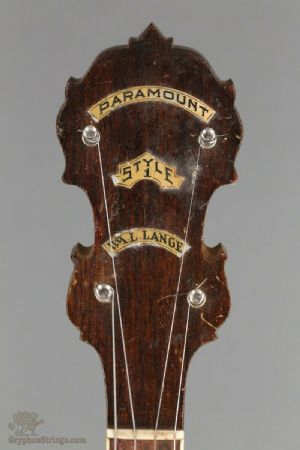 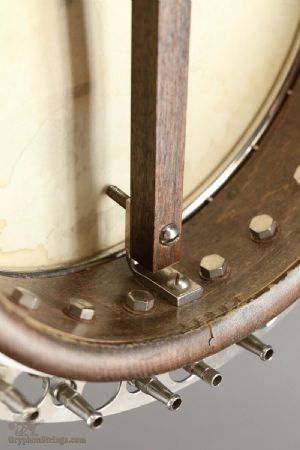 Also, the attached Van Eps but I don't know how this is supposed to work.

quote:Originally posted by Stephen John Prior

Is this the Ludwig adjustment heel screw? 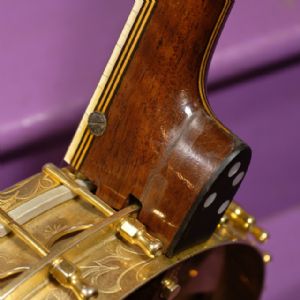 '60s Vega could adjust neck angle up, down, side-to-side. Framuses (Frami) had a great adjuster. I think Tom got his idea from the Kays.

Yeah, like Paul said, the 1960s Vegas had a cutaway at the bottom inner face of the heel, and a thin metal plate. Two little Allen screws protruded from the inside of the rim to press on this metal plate and let the neck rock out or in (and side to side adjustment too, if you adjusted the two screws differently). The bottom coord. rod held the neck tightly in place. I've never adjusted mine, but there are instructions printed right in side the rim on the yellow tape. The disadvantage, as some have pointed out, is that the contact of the wood of the heel, with the outside of the rim, is kind of minimalistic, and not great for getting all possible tone and volume the banjo would otherwise be capable of.

Also, I've noticed on old Cole banjos that they had a neck adjuster as in the photos above inside the rim under the tailpiece area.  Like the Paramount, Windsor, metal rimmed banjo, etc.

The Richard Kuenstler âturn buckleâ brace that Stewart used was supposed to do this. We know how well they worked...

Fred Van Eps used a version of the Kuenstler on his banjos. I use them just snug enough not to rattle, no pressure either way.

Weymann banjos used a more massive concept that flexed the dowel rod. Those seemed to work better than the Kuenstler version.

In all these cases, I suspect that they were designed to be used for very tiny adjustments. I doubt the inventors could have guessed that at some point people would try to use wire strings and 5/8â bridges. The result is âpop goes the heelâ.

Also, the attached Van Eps but I don't know how this is supposed to work.

He used these on his non resonator banjos built with a straight dowel rod and Farmer tone ring as well. 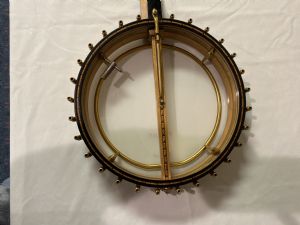 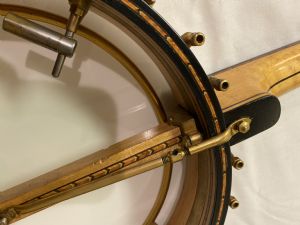 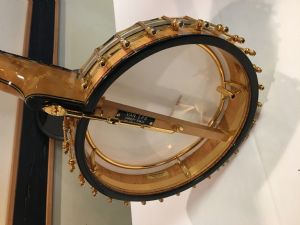 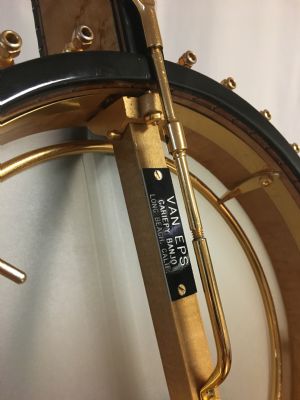 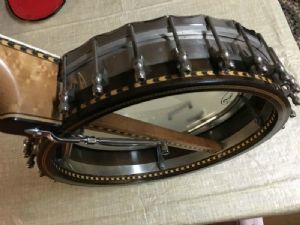 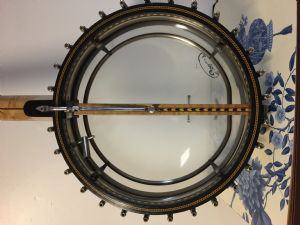 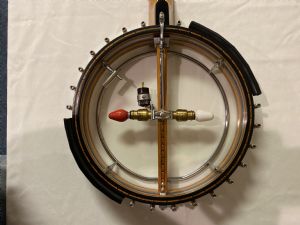 The Ludwig adjuster system had a screw on each side of the heel. Each screw moved a bolt out of the back of the neck to push the neck into a proper angle. The bolts could also be set independently to center the neck.

quote:Originally posted by Stephen John Prior

Is this the Ludwig adjustment heel screw?

Thanks John that is indeed the mechanism.

Gatcomb also provided a means to adjust the neck angle. A small screw on one side of the heel was used to adjust a cam that pressed against the rim.

Thanks for your replies. There sure were a lot of different manufacturer ideas for adjusting the neck angle on their banjos. I'm kind of surprised because in all of the old banjo literature I've read I don't recall seeing an article about neck angle or string action.

The Daynor by Gretsch had one. It allowed you to adjust the neck angle; and, as well, adjust the neck sideways to center the strings over the fingerboard. One big screw held the neck to the pot. 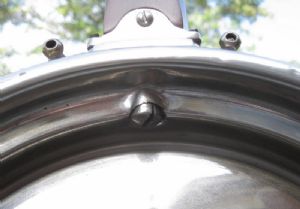 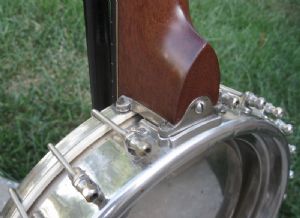 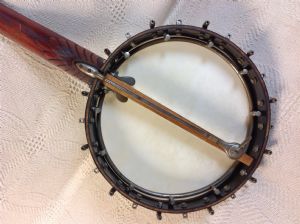 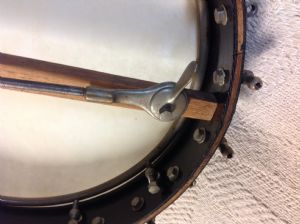 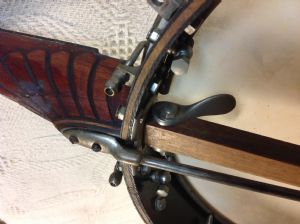 Kraske and Waldo banjos (both built by Schall, or with Schall parts) had patented neck adjusters. Later J. French banjos had one that was quite similar to the Cole "Little Giant" mentioned above.

Most of these mechanisms, at least the ones from the pre-tenor-banjo era, were only intended to change the neck angle a very small amount to compensate for head and string variances. That's why, as Joel says, they will often break parts when cranked to the max under steel string tension. 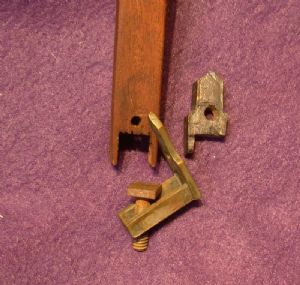 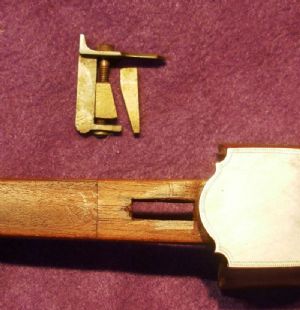 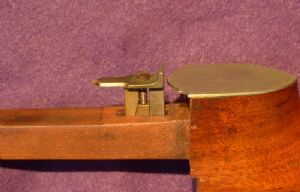 The later model Paramounts had a neck angle adjuster attached to the end of the neck. There were two screws used to push a metal plate against the tension hoop. And you can't forget the Weymann adjuster/brace. 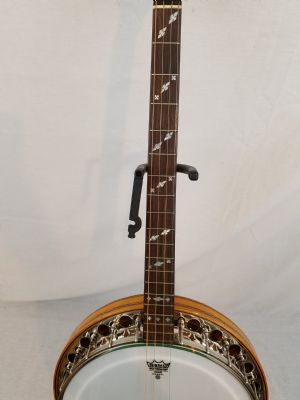 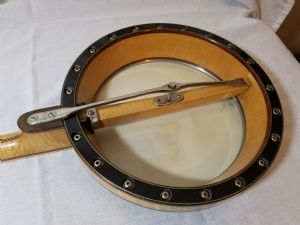 'Does INCLUDING a ukulele PREVENT this from being "Bluegrass"?' 1 hr

'where to buy banjo parts in alaska (anchorage)' 3 hrs