B&D Silver Bells: value as it relates to the flange type

With all other things being pretty much equal, is a B&D Silver Bell #1 plectrum with the flange from the earlier (1924-ish) model on the left valued less than the one on the right with the later flange? (In this case a 1927). And are there other design factors that would affect the value of one over the other? 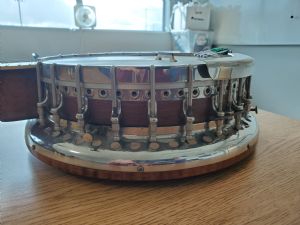 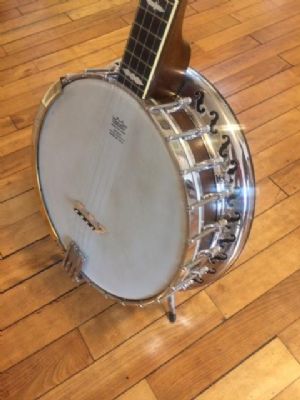 The obvious answer to me would be that the plectrum 1924 is not all "original" so it would be valued lower. I might be reading this wrong. I would think that the neck might have something to do with the value also. If I was buying I would spend more on a 5 string, then a plectrum, then a tenor. If there was no neck I probably wouldn't buy so the value to me is 0.

The obvious answer to me would be that the plectrum 1924 is not all "original" so it would be valued lower. I might be reading this wrong. I would think that the neck might have something to do with the value also. If I was buying I would spend more on a 5 string, then a plectrum, then a tenor. If there was no neck I probably wouldn't buy so the value to me is 0.

Hi Glenn, thank you for your response, but all I'm asking is what effect the flange design (note the difference of the flanges in the two photos) has on the value of a B&D #1 Silver Bell plectrum, assuming that both plectrums are original and in near identical condition. I'm guessing that the one with the later flange design (photo #2) is more valuable than the other one. I was hoping to hear from a B&D expert, which I by no means am.

sorry that I misunderstood your post....I do like photo #2 also. I have 2 B&D banjos that have a "bell" cutout in the flange.

I think people would be more concerned with which iteration of the tone ring was used, although people are concerned with looks. Of course, the slight differences in tone of the three different Silver Bell rings, as well as the looks would be mostly a matter of individual taste.

In other words, I don't think there's a real answer to this question.

The earlier flange with round holes does not project as well as it's successor with the f or s shaped holes, reducing its desirability and value to both SB fingerstyle and pick players. Some claim the soldering to the flange of the threaded mounts for the resonator bolts tends to fail more often on the earlier flanges as well.

I've heard that second argument, but not the first. I had forgotten that the earlier resonator mountings had that problem.

Personally, I'm not as fond of Silver Bell banjos as many people are. I don't care for their tone and for my purposes, they are far too loud.

They are, however, extremely well built.

In the period early 1923 to mid/late 1927 Bacon and especially Mr. Day constantly improved/altered the construction and design for the classic Silver Bell model - 6-7 versions from this period are to be found.

Plus - most got a Presto TP - but some an Oettinger TP.

Plus plus - some got a soft pedal mute.´- most not.

Tenors did in 1924 start out with a 17-fret neck - but very soon they started building 19-fret examples as well.

Apart from the various features as mentioned above plectrums from 1924 are in principle identical - with a non-reinforced neck and a somewhat fat neck profile.

By mid/late 1927 the final (6th or 7th) SB version was introduced - all examples do have these features:

All versions were as mentioned indeed very well built - the only weak part is the soldered-on small square lugs at the flange (for the 4 thumb screws) - they tend to go loose if the screws are tightened too hard. By 1929/30 Bacon introduced another and much better construction - without the lugs - instead with threaded brass inserts installed in the rim. But at that time the production of the classic SB model had been almost discontinued - hence extremely few examples with the new reso attachment can be found.

The performance and playability of a certain SB relates to a lot of features and the actual design - all examples are in principle indeed great - but the various versions do differ very much in sound, power, sustain and projection.

So - answering the OP´s question is a Mission Impossible - Sorry!

Regarding value - I´ve seen 1924 examples go for the same as late 1927 examples - mind you all in appr. the same nice condition.

But - once rebuilt/optimized to an ultimate pro-level e.g. my way a 1927 example will be plenty more costly - due to its more rich sound, its greater power, its longer sustain and its better projection in all directions - plus its strong and sturdy neck due to its steel reinforcement - plus plus especially its improved playability due to its very slim neck profile.

Here´s a 1927 example of mine in mint condition - for you to droll over - LOL! - restored, rebuilt/optimized and set up my well known way - the absolutely best B&D SB plectrum ever experienced by me - sold last winter to a Spanish pro-player: